The Daily Nexus
Sports
How Community is Built at a Mid-Major School
May 23, 2019 at 2:16 pm by Omar Hernandez 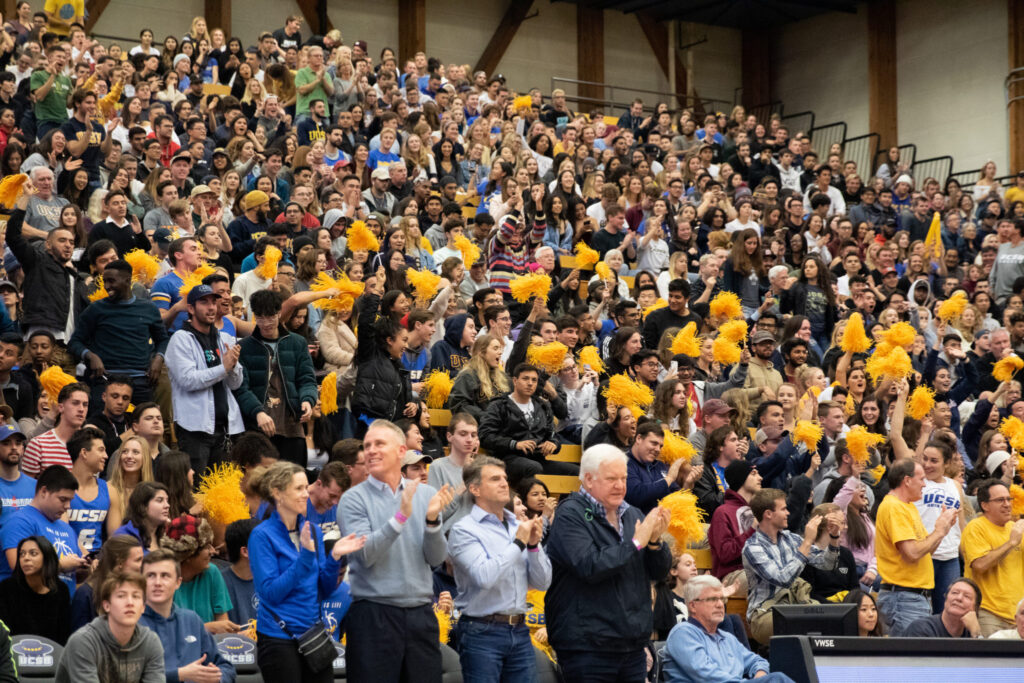 4,800 people were in attendance for the Gauchos victory over Cal Poly.

Community and school spirit are complicated to measure on a college campus.

There are schools so tight-knit that even wearing your rival team’s colors at a certain time can be a social death wish, and there are schools where you can go to class in another college’s sweater and people won’t bat an eye. Clothing choice obviously isn’t the only barometer for school spirit, but the truth remains that some colleges and their students revel in the concept of an exclusive identity and the bonds that come with it far more than others.

This sense of community, of belonging, is often both reflected in and created by college sports.

It’s easy to see this in the powerhouse schools across the country. Alabama’s football team literally brings together an entire city and surrounding areas on Saturdays to watch the game; Duke and the University of North Carolina have created metaphorical fortresses just 15 minutes away from each other with their men’s basketball teams; the University of Connecticut formed a women’s basketball empire that draws thousands of students to fill their arena just to watch their team on the big screen when they make it to March Madness. While how much of this is just young people wanting to fit in and get drunk on the weekends while watching the game and how much is a genuine feeling of community and school spirit (and just how different these two things are) is up for debate, there’s no doubt that these effects of sports on a college campus are very real.

So how does this play out at a football-less mid-major school here at UCSB?

To understand this relationship between sports and how we form community as Gauchos now, we first have to look at how we did it in the past.

While the NCAA and college sports did not exist as both the financial and social institutions they are now in the early days of UCSB, our sports teams certainly did have a presence. Even as far as 70 years ago, the Nov. 16, 1945 edition of the Daily Nexus (then known as El Gaucho) recapped our men’s basketball team’s 36-25 victory over the Marines by pointing out how our “capacity crowd” helped will the Gauchos to victory.

Forty five years later, our basketball stadium earned its “Thunderdome” moniker because of how raucous the crowds were in our victory over the highly esteemed University of Nevada, Las Vegas Rebels. Students literally camped outside the ‘Dome the night before to wait in line for tickets, and footage from the inside on game day showed a crowd that almost makes the Cameron Crazies pale in comparison.

This still holds true in the recent past. From 2000-2015, we hosted seven out of the top 10 highest attended regular season soccer games in NCAA history, won the NCAA College Cup and also hosted the UNC basketball team here at the Thunderdome.

Over all these years UCSB built up a strong reputation nationwide as a “party school,” even without a football team for most of it. Students were able to mix the relative freedom and separation that Isla Vista offers with school spirit and community that is centered around our sports teams.

Injuries, fatigue and just a lack of enthusiasm seemed to plague most of the sports teams my freshman year.

Our men’s basketball squad finished 6-22 and had some of the lowest attendance numbers in years; our men’s soccer team finished 10-7-3 and lost in their first match in the Big West tournament; our baseball team fresh off a remarkable College World Series run went 24-32 and weren’t even close to sniffing the postseason and although our women’s basketball team had a surprisingly good postseason run, they ultimately dropped the Big West Tournament championship game and ended with a 16-16 record.

It really did feel like a fragmented campus in many ways. While people were able to find community on campus in other ways, whether it be through clubs, fraternities or just their dormmates, there was never really a time or place that I felt connected to the student body as a whole  other than our school-sanctioned concerts and one Blue-Green rivalry soccer game against Cal Poly.

It only took one year, and a historic basketball season, for that to change.

When our men’s basketball team started off the 2017-18 season with a 9-2 record led by new Head Coach Joe Pasternack and star junior guard Max Heidegger, students began to get curious. It was my first year covering the team and when I interviewed Coach Pasternack in the preseason, he emphasized over and over again the importance of getting the campus involved with the team for the benefit of the students and the players. I thought he was being overly optimistic at the least and that perhaps spending so much time as a coach at the University of Arizona had skewed his perception, that it wasn’t really possible to bring people together here in the way he claimed.

Then students started to show up to the games.

Slowly but surely attendance started rising, and our team became the talk of the town. I heard conversations about UCSB basketball in the dining commons, in class, even in random places I.V. It seemed as if people were just waiting for something to cheer for, for something or someone to rally around, for a way to express their pride in being a Gaucho.

We ended up having the best home record and home crowd in the Big West, culminating with a packed house of 4,833 students in our season finale beatdown of Cal Poly. I remember looking up and seeing the packed stands that night, seeing everyone in blue and gold cheering on the team and thinking that this is what community feels like.

Now, just a year later, we have the opportunity to make our own mark on UCSB sports history. Our men’s volleyball team reached as high as a No. 3 rank this season and packed Roberson Gym with eager fans during the games; our men’s basketball team again had an incredible season and actually saw attendance numbers rise; both tennis teams have been running through their competitions; our women’s water polo team was nationally ranked and our baseball team has put together the best season in program history.

This sports renaissance has not just been great for sportswriters and stat-geeks like me but has also given incoming and continuing students a chance to go cheer our teams on and be a part of their success as well.

While UCSB might never be a sports powerhouse, while we might never get a football team or have tailgating opportunities, we’ve shown that we have the ability to find a sense of community in the teams we do have, and as long as our teams keep improving, so will our school spirit.

abandoning football was an idiotic move. UCSB pays for that year after year. last I checked students get in free. The paying “community” is Santa Barbara County and its environs. Men’s and women’s basketball engaged the community at times over the past 40 years(Pimm/French) but filling that tiny pre-fab events center is not exactly coining it. The former football stadium has far more potential but that went the way of the dodo. Oh, and substituting soccer?–no way. Growing sport at UCSB would require competent leadership–something the current administration failed to provide on multiple occasions. Soon the baseball coach will move… Read more »