The Daily Nexus
Opinion
Why ‘Bromance’ Should Be Normalized
May 20, 2019 at 4:02 am by Paige Holloway

Anyone can appreciate the wholesome nature of a friendship between two men who are not afraid to show how much they love each other. “Bromances,” as I like to refer to them, are the type of supportive and encouraging friendships that everyone should strive for. One of the most iconic TV bromances of all time is that of Chandler and Joey from “Friends.” Their constant banter and mutual support throughout the show is one reason why “Friends” is still so endearing today. You know it’s an admirable friendship when watching them interact is more entertaining than watching the romances on the show.

The reason these close-knit male friendships are so heartwarming to witness is because they defy the ideals of toxic masculinity that flood society today. The concept of toxic masculinity refers to the harmful effects on both men and women that come from the expectation of men to conform to traditional ideas about how men should act. Typically these expectations include confidence, strength, independence, and emotional suppression. Today, perceptions of masculinity suggest that two straight men cannot show affection towards one another without sacrificing their manhood. Bromances and the satisfaction they bring directly contradict these misguided societal expectations. Unfortunately, the social environment of college can sometimes magnify toxic masculinity and therefore prevent men from forming close friendships. 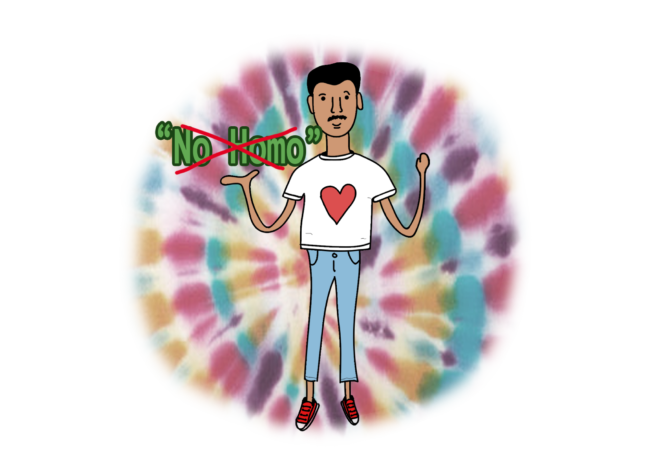 As a woman, I can’t begin to imagine the pressures that come with trying to live up to societal expectations of masculinity. However, I have seen firsthand how the pressure to be manly can negatively influence the way men act around their friends.

Perhaps the most common and disappointing example of this trend among UC Santa Barbara students is the use of the phrase “no homo.” While the casual use of derogatory slurs about the LGBTQ+ community is frustrating in itself, there are several other things wrong with the use of this phrase. Typically, this reassurance is almost always used as a follow-up after a man lets his guard down or shows vulnerability to one of his friends. For some reason, there is a need for men to reassure their friends that they are still masculine after they express a natural emotion. The concept of toxic masculinity reflects the distorted mindset that men being emotional is synonymous with them being gay.

I remember a significant moment about a month ago when one of my close guy friends confided in me that he had bought Coachella tickets for himself and his best friend as a surprise. When he eventually revealed the secret, his best friend had the happiest reaction I had ever seen. He shot up from his seat and ran to wrap up my friend in a hug while exclaiming, “I love you, man!” This moment perfectly exemplified why bromances are one of the purest things in the world. Well, that was until he felt the need to follow up his excited outburst with “yo, no homo though.”

The reason these close-knit male friendships are so heartwarming to witness is because they defy the ideals of toxic masculinity that flood society today.

By tacking on this unnecessary statement, his friend managed to illegimatize all the gratitude he had previously expressed. This constant concern with maintaining the image of an ideal man can pose a barrier between men’s ability to form deep emotional bonds in their friendships. Toxic masculinity forces men to hide certain aspects of themselves to people they consider their best friends, which keeps these friendships at surface level. I can’t even imagine what my life would be like if I felt I had to withhold my emotions and act a certain way in front of my friends.

While the concept of “bromance” is funny and endearing, it really should be a  prominent goal in male friendships. Studies show that men in the US were 3.54 times more likely to commit suicide than women in 2017, and the numbers are only increasing. This can partly be credited to society’s unrealistic expectations concerning male’s emotions. No one can remain completely stoic and strong at all times, yet that’s what these skewed standards teach men they must do. While friendships are not the entire solution to solving internal struggles, they can provide support and love in times of need. The ability to confide in a friend when you need to can make all the difference in the world.

Combating toxic masculinity begins with changing the way men approach emotional expression, especially in their friendships. If more men chose to defy the expectations of toxic masculinity and truly open up to their friends, it could be mutually beneficial. And as for society’s view of masculinity, people need to realize that there is nothing “unmanly” about two best friends hugging to show they love each other. Chandler and Joey were the heart of “Friends” in my eyes; bromances like theirs should be the norm.

Paige Holloway admires bromances and is frustrated by the societal expectations that work against them.

Wow what a great article