Researchers at UCSB have discovered a potentially druggable pathway that may help in treating these neurodegenerative disorders, or tauopathies. Their findings appear in Science Translational Medicine journal.

“A new pathway exists that can potentially be targeted for drug delivery that can improve the lives of patients of these neurodegenerative diseases in a relatively short amount of time. And that’s particularly encouraging given the observations that the drug was very efficacious in reducing the pathology in mice [with frontotemporal dementia],” Israel Hernandez, a postdoctoral researcher in the lab of UCSB professor and Neuroscience Research Institute co-director Kenneth Kosik, and the paper’s lead author, said.

The RASD2 gene encodes the signaling protein Rhes — part of the Ras superfamily — and mediates this regulatory pathway. While not much is known about this gene, it is implicated in Huntington’s disease. Rhes plays a role in various signaling pathways and in the development of Huntington’s.

Through the process of farnesylation, a chemical compound — a farnesyl group — anchors itself to Rhes. Another closely related process called prenylation facilitates the protein’s attachment to the inner layer of the cellular membrane, where it functions, Hernandez described.

“That is believed to be understood as an important mechanism by which it can actually control tau aggregates and their toxicity in cells,” he said.

Hernandez and his colleagues realized that if they could arrest farnesylation, they might be able to prevent Rhes from being toxic to the cell. Hence, using a farnesyltransferase inhibitor “made sense.”

Using the drug lonafarnib, a farnesyltransferase inhibitor, the researchers could target Rhes to reduce its levels.

In testing lonafarnib in mice models with frontotemporal dementia, the researchers saw significant reductions in behavioral abnormalities and neural atrophy.

As the mice models age, their pathology further develops. They concurrently exhibit worsening behavioral deficits, including poor nest shredding and obsessive running around in circles by the beginning of 10 weeks.

At 20 weeks, treated mice produced well-built nests and displayed less erratic behavior. They also showed less reduction in brain size and in microglia counts than their untreated counterparts. The researchers concluded that lonafarnib did not seem to reverse existing pathology but appears to act as a preventative measure. 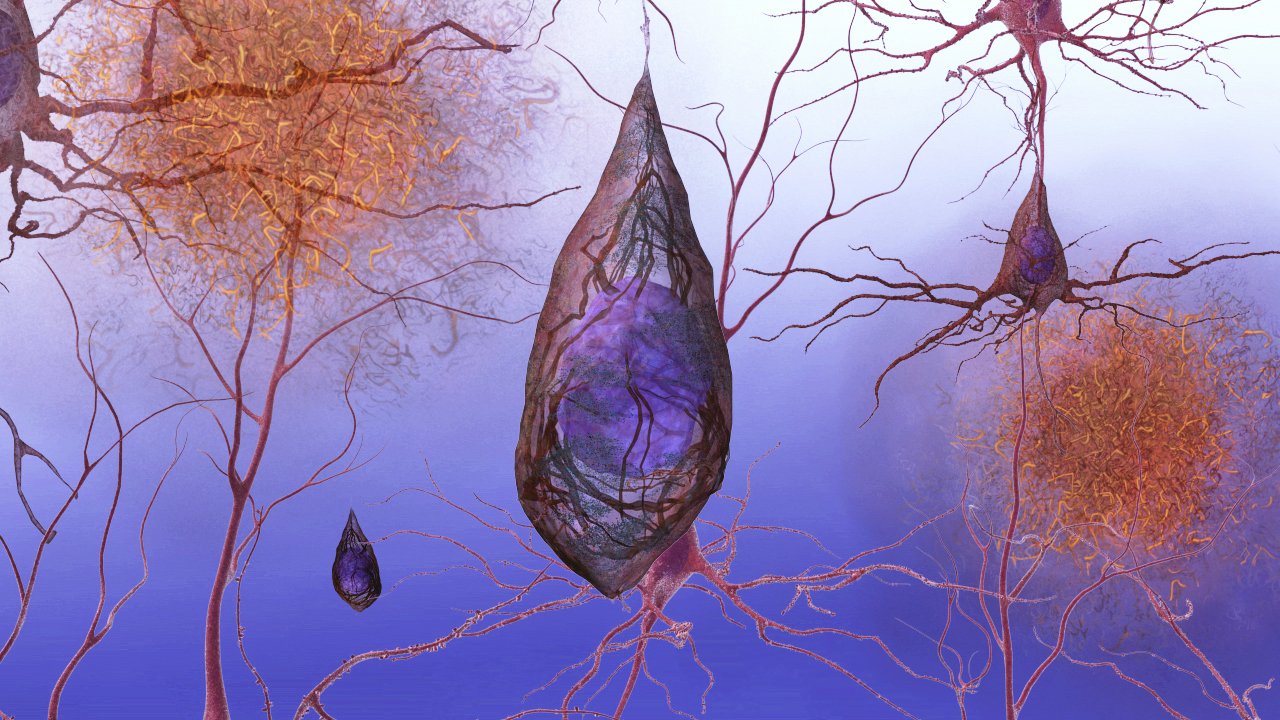 Using the drug lonafarnib, UCSB researchers found a novel pathway that may potentially be druggable and may help to treat neurodegenerative diseases, such as Huntington’s or Alzheimer’s. Tauopathies are characterized by the accumulation of tau protein, which forms neurofibrillary tangles. / Courtesy of National Science Foundation

Originally developed with the intent to disrupt the signaling involved in cancerous cell proliferation, lonafarnib was unsuccessful in fighting cancer. However, because it has already undergone extensive clinical experience, the drug may be fast-tracked for pre-clinical human trials after repurposing it to treat tauopathies.

“Right now these neurodegenerative diseases are basically nontreatable. All the clinical approaches are done in a palliative manner. You’re maybe trying to make their life better, but you’re not really trying to cure them. And that’s something that we think must be addressed as energetically as possible,” Hernandez said.

Lonafarnib works through a potentially druggable pathway, meaning “you can develop drugs that will be able to direct to Rhes in a manner that can be disease-modifying, as opposed to a target that is more difficult to modify its activity,” Hernandez explained. “In this case, as an example, by using a prenyl activity inhibitor we [can] reduce the activity of Rhes and its levels. Therefore it’s a target that’s easy to develop drugs for.”

While the drug’s mechanism of action is still yet to be fully uncovered, Hernandez and his team found that it increased autophagy, the regulated mechanism to degrade and recycle cellular components. Lonafarnib also increased lysosomal proteolysis, the breakdown of proteins — notably in this case, aberrant tau — by lysosomal enzymes.

The discovery of this biochemical pathway partaking in tau degradation helps to further uncover how such pathways interact together and are regulated by prenylation.

Another impactful discovery is that there appears to be a feedback loop in regard to how Rhes recognizes tau and modifies its levels, Hernandez noted.

“The presence of the tau mutation is actually regulating the levels of Rhes present in the cell. That’s very, very interesting because it suggests a regulatory loop in how Rhes reacts to the presence of mutation. Reducing these levels [of Rhes] would reduce its potential cytotoxic effects,” he said.

Hernandez hopes to next uncover the mechanism by which prenylation regulates lysosomal proteolysis, including the processes of exocytosis and endocytosis.

“All of those are biochemical examples that are intimately related, but which prenylation was not known to be an important regulator until now. And our team discovering which are the proteins and which are the important targets in those molecular pathways will uncover further potential therapeutical targets and uncover very, very exciting biology in the tau field.”

This should really include the lab it came from; just saying NRI is not descriptive at all. The postdoc is in Prof. Kosik’s lab.