The Daily Nexus
Recipes
Feast of the Seven Kingdoms
May 16, 2019 at 12:30 am by Winnie Lam and Tiffany Velazquez

After waiting years for winter to come, it’s sad to see the “Game of Thrones” series finally drawing  to an end. In order to cope with the fact that we’re going to be seeing the last episode this Sunday, we’ve curated a list of “Game of Thrones” themed food that tastes so good it’ll keep your mind off the fact that we won’t be seeing our favorite characters ever again. These foods are easy to make and they’re perfect for a “Game of Thrones” viewing party where we can cry and laugh with the Starks, Targaryens and Lannisters one last time. 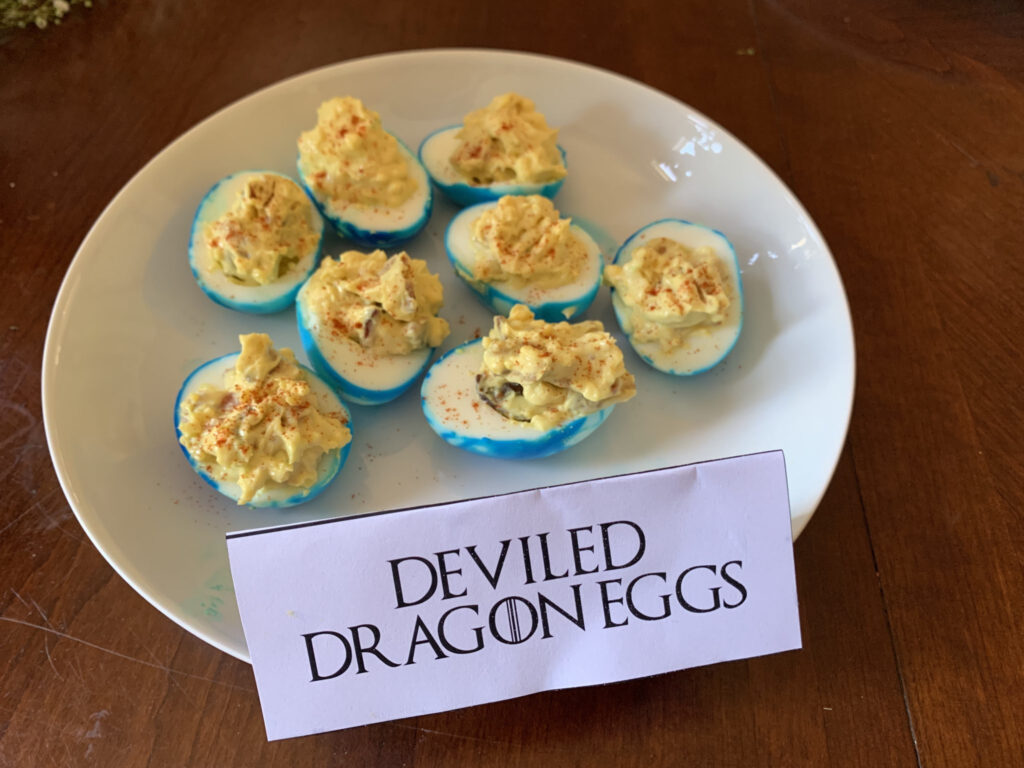 It’s amazing how much Daenerys and her dragons have been through since they first hatched at the end of Season 1. It was heartbreaking to watch Viserion fight for the Night King and Rhaegal fall into the ocean at the hands of Euron Greyjoy, so it’s easier to think back to the simpler times when they were just beautiful dragon eggs. 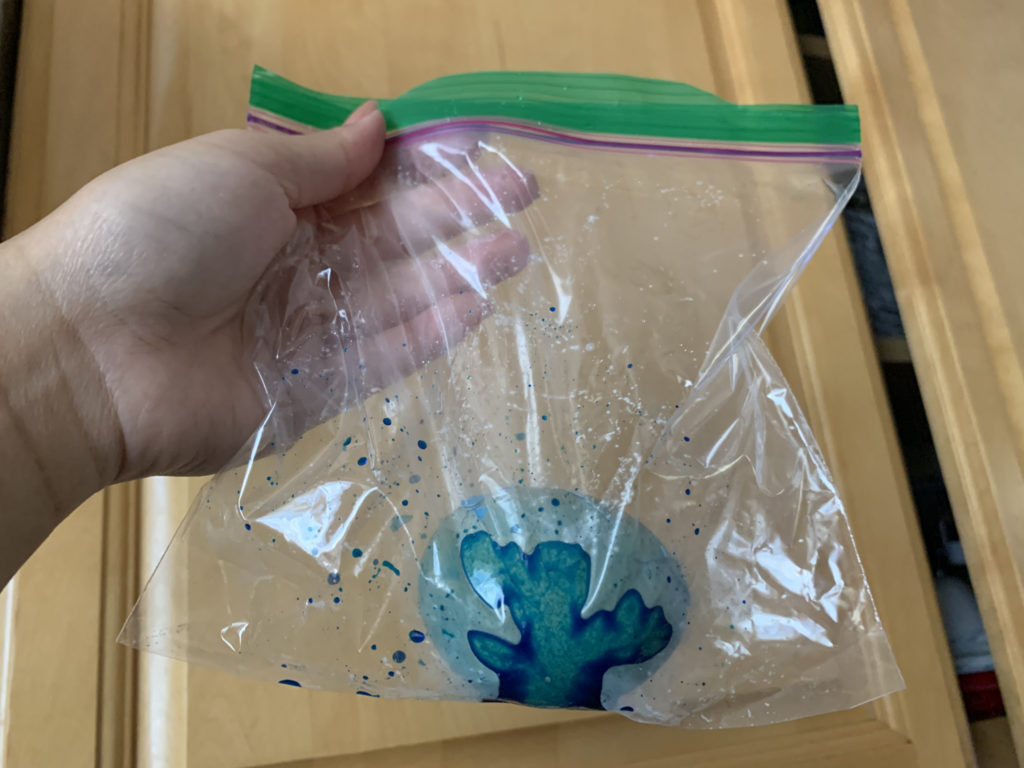 In order to make these dragon deviled eggs, you’ll need four eggs, blue food coloring, ¼ cup of mayonnaise, 1 tablespoon of mustard, 2 strips of bacon and paprika. Boil the eggs for 9 minutes and put them in an ice bath to cool down. Then, gently crack the egg shells but don’t peel them. Place each egg in a Ziploc bag and put 2 drops of food coloring on the egg before gently rolling it around in the bag until the entire shell is covered with the food coloring. Set the eggs aside for 30 minutes. While you’re waiting, cook your bacon and cut them into small pieces in a separate bowl. 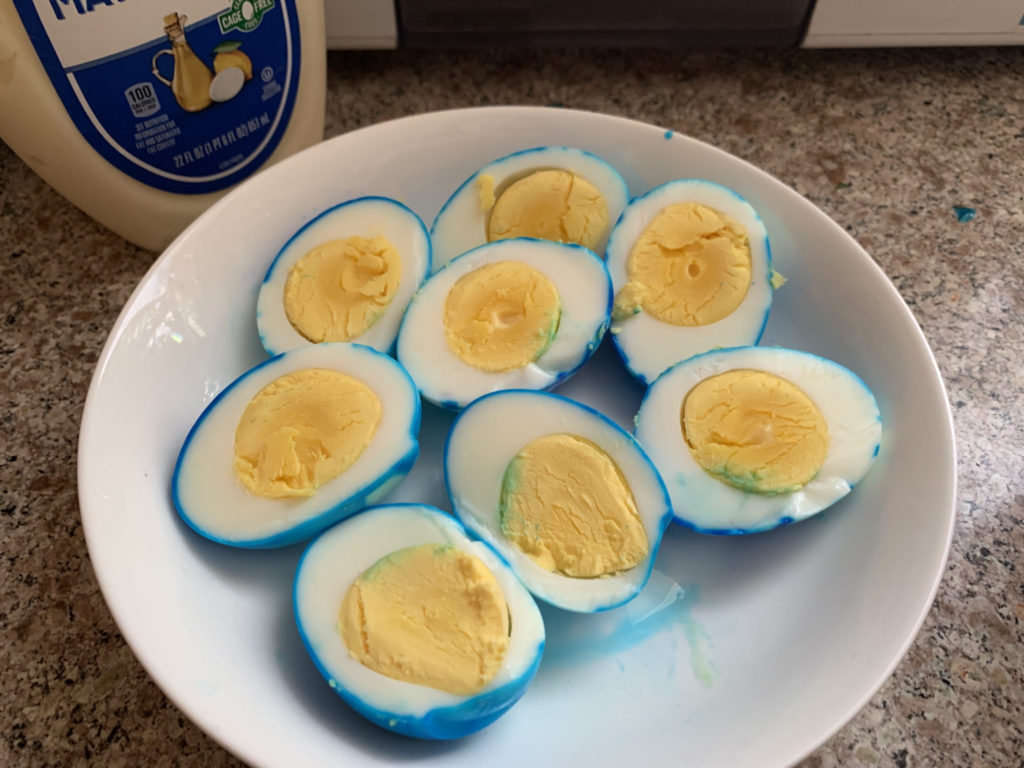 Rinse off your eggs, peel them and cut them in half vertically. Scoop out the egg yolks and add them into the bowl with the bacon and then add the mayonnaise and mustard. 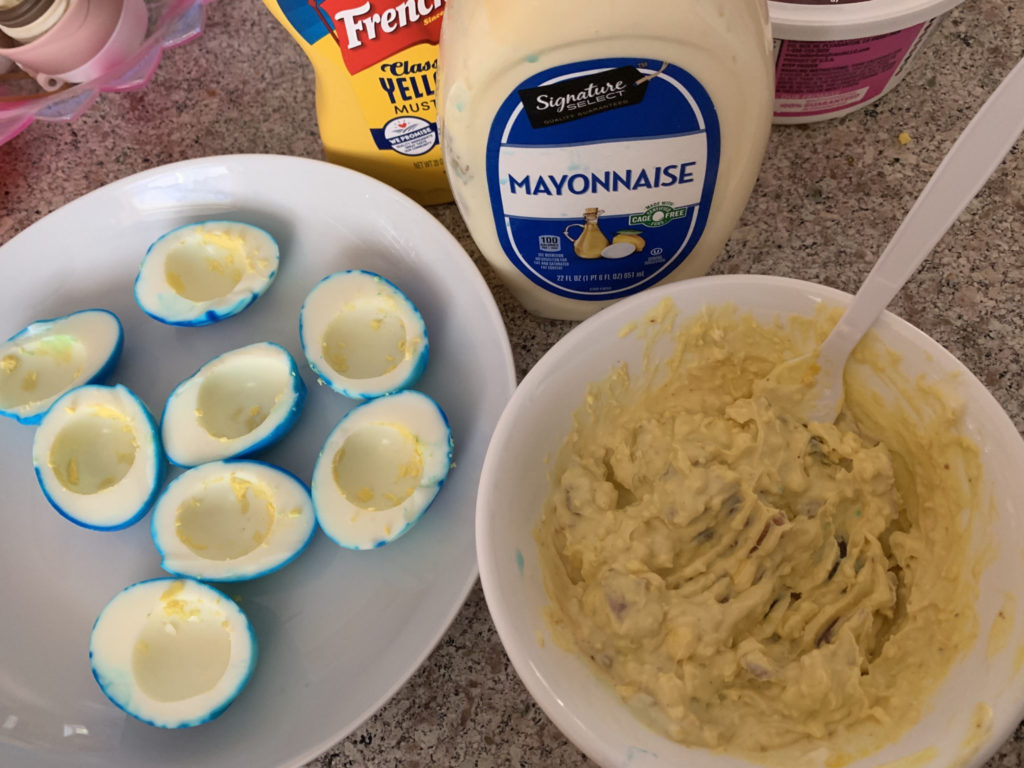 Mix all the ingredients together for the deviled eggs filling. Put a generous amount of filling into each egg and top with paprika. 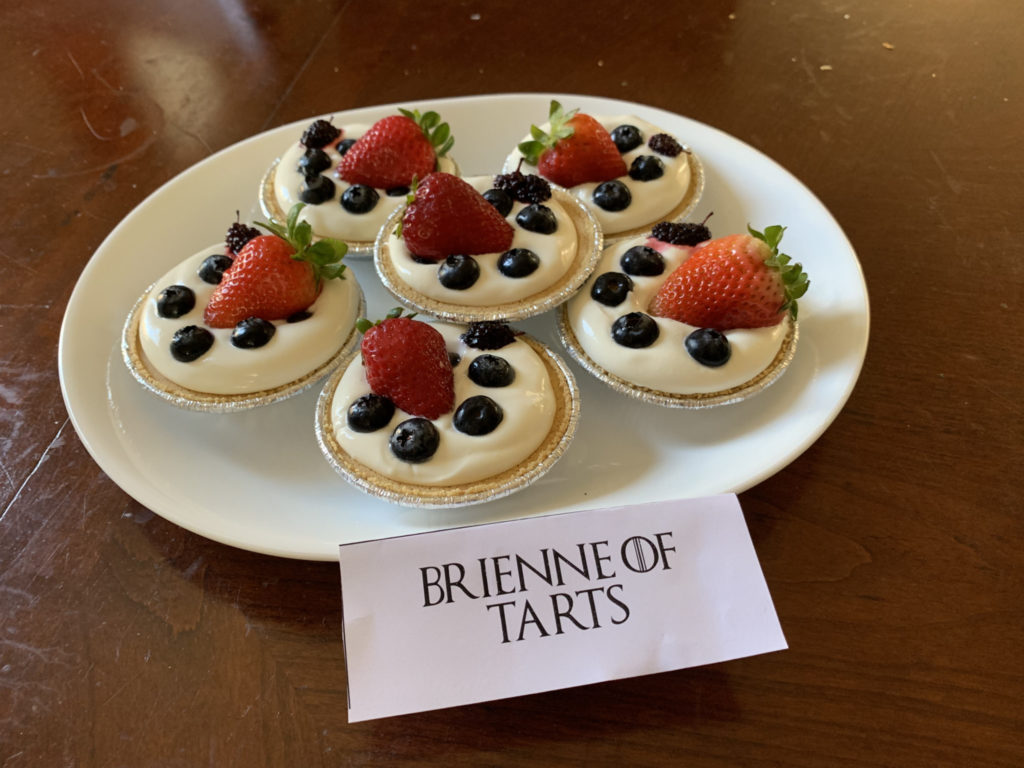 As one of the strongest yet underrated fighters in Westeros, Brienne of Tarth definitely deserved a dessert dedicated to her. 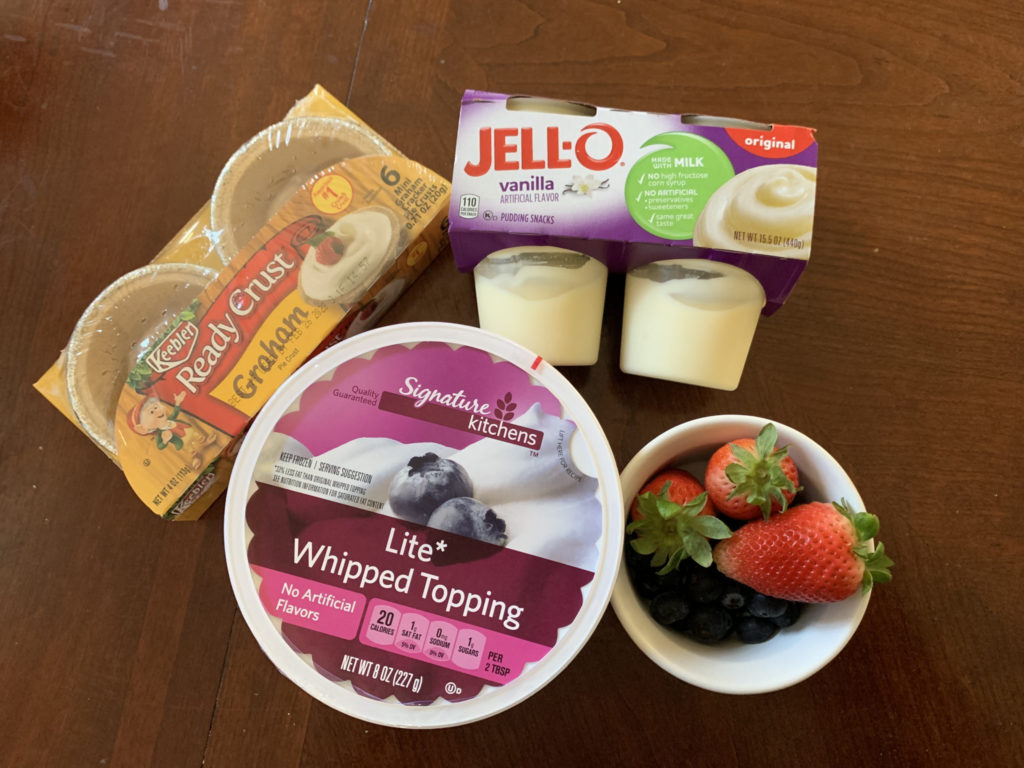 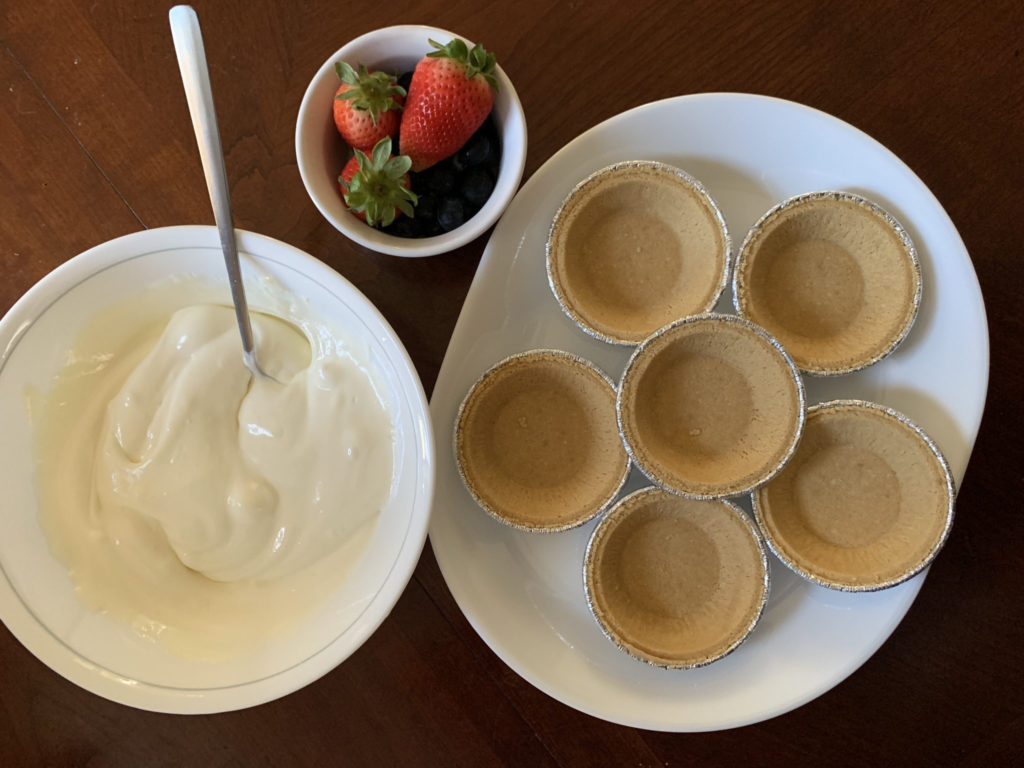 This dessert is extremely simple as all you need to do is empty 2 pudding cups into a large bowl and gently fold in the whipped topping. Then, fill each crust with the filling and top with your favorite fruits.This is sure to be a crowd-pleaser since the tartness of the fruit goes well with the sweet flavor of the filling! 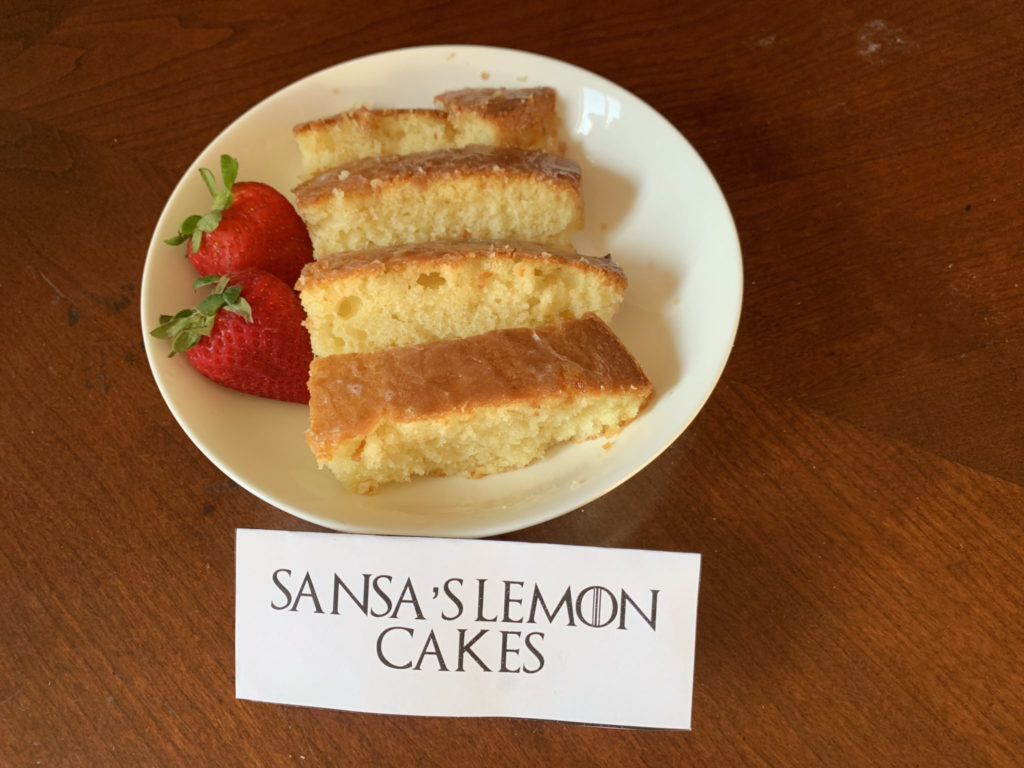 Sansa Stark’s journey throughout the series is probably one of my favorite instances of character development. She’s one of the strongest female figures in the show, and who can forget her favorite dessert, lemon cakes? 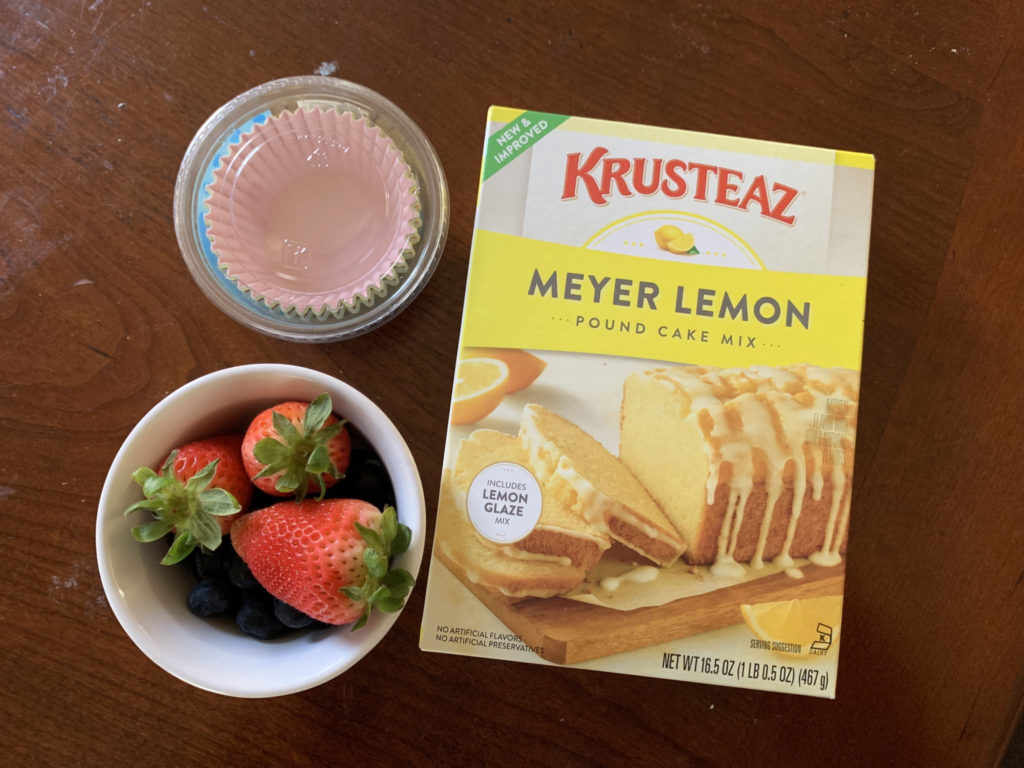 It’s too time consuming to recreate the lemon cakes with eight seasons’ worth of plot on your mind, so I just followed a box recipe for a lemon pound cake and paired it with some strawberries. The cake’s citrus aroma and sweet taste was delightful. It’s a shame that Sansa couldn’t have these all the time, as I can’t imagine how the Starks could grow lemons in Winterfell. 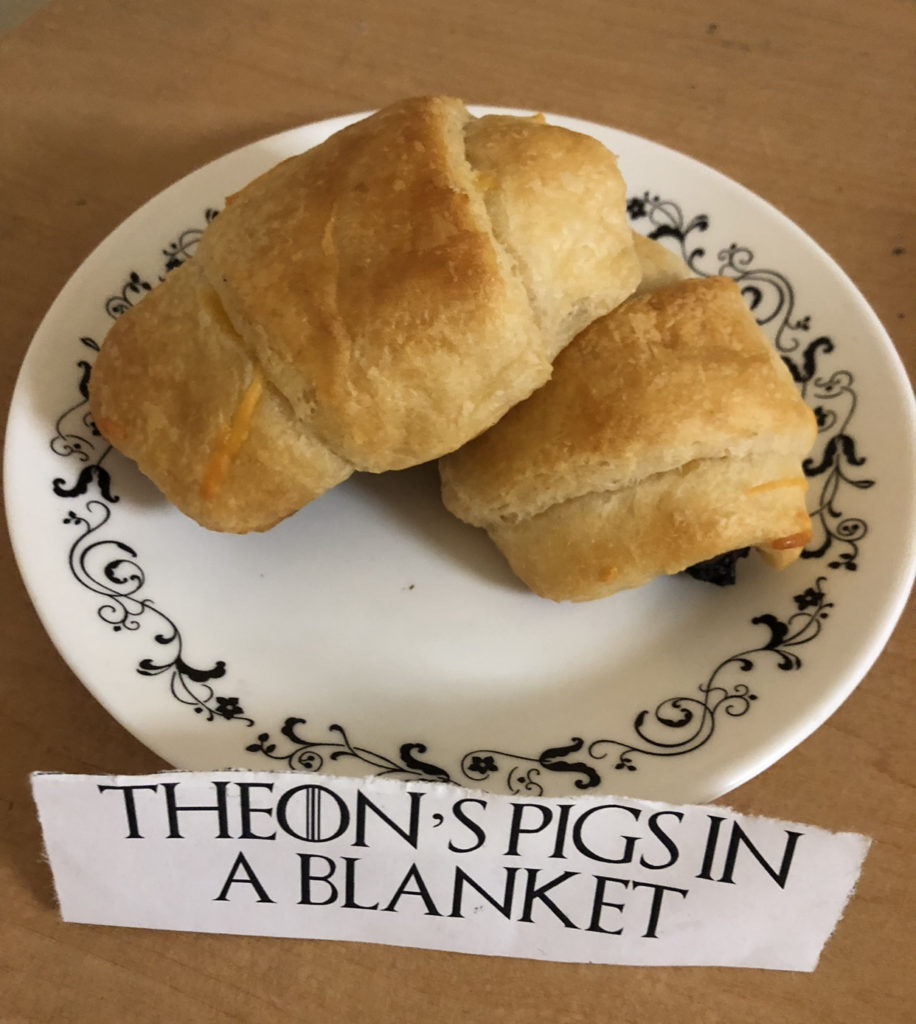 Theon’s Pigs in a Blanket

It wouldn’t be a proper viewing party without a nod to Theon, who died as both a Greyjoy and a Stark after a brutally dark journey. While he did make up for his past mistakes by helping Sansa to flee from Ramsay and dying at the hands of the Night King to defend Bran, I had to have at least a little fun with this one by giving a nod to the series’ most sadistic villain. Fans will not soon forget Ramsay Bolton’s murderous ways or his physical and psychological torture of Theon. Even so, you can’t make it through eight seasons of “Game of Thrones” without attempting to make light of the constant violence and bloodshed.

In order to make this homage to Ramsay’s castration and later mocking of Theon — who can forget how this bastard made him think the sausage he was eating was a more familiar body part? — you’ll need sausage links, crescent rolls and cheddar cheese. Cook the sausage links on medium-high heat according to the instructions on the package, making sure to turn often. Once cooled, separate the crescent dough into triangles and wrap it around the sausage link with a bit of cheddar cheese added in. Bake for 12-15 minutes in a 375° oven or until golden brown. Let cool before enjoying, and make eye contact with your guests while eating if you really want to mess with them. 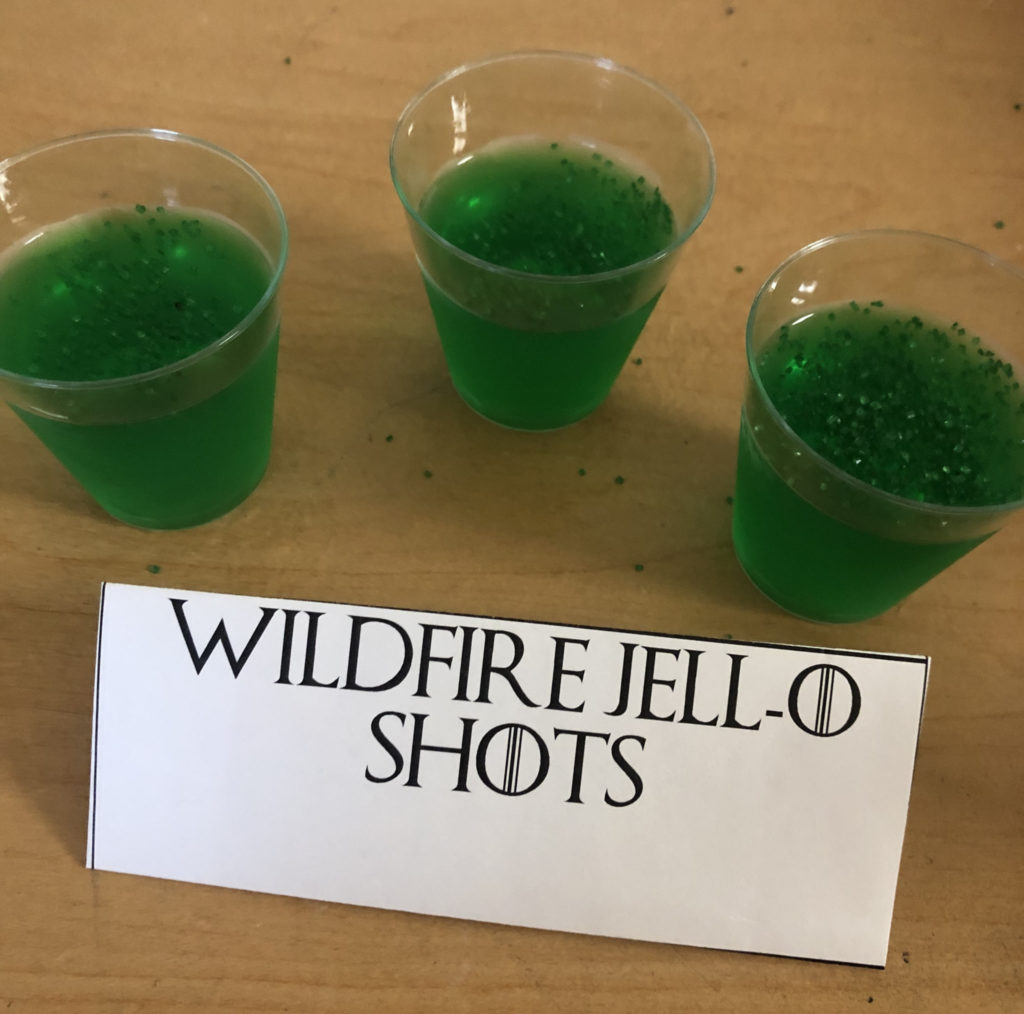 Wildfire has played an important role since before the events of the series unfolded. Though intending  to destroy the entirety of King’s Landing during Robert’s Rebellion, the Mad King’s plot was stopped before it was carried out and resulted in the events that named Jaime the Kingslayer. With the series ending and everything going up in literal flames during last week’s episode, we recreated this flammable liquid with another equally dangerous one — vodka!

Follow the directions on the Jell-O box, boiling one cup of water and adding it to a large mixing bowl with the Jell-O powder. Stir the mixture together until the Jell-O has completely dissolved before adding ½ cup of cold water and ½ cup of vodka to the bowl. Stir everything until fully mixed and pour into plastic shot glasses, filling the cups about three- fourths of the way. Chill the Jell-O shots for about 3 hours or until set. If you really want to be destructive, make a drinking game out of the final episode and down a shot every time the writers destroy another character’s series-long arc.