My sister told me to watch the newest season of You on Netflix. I politely declined.

For those unfamiliar with You, a male bookstore owner becomes dangerously obsessed with a young woman and turns into a violent, sinister stalker. I cannot speak much further than that on the merits of the series because, as I said, I was not interested.

What I would like to do now is not conduct any kind of review about You or the other predatory dark stuff being put forth by nearly every entertainment outlet right now. Instead I would like to make clear why I have decided not to watch them.

Now, I’m not the biggest fan of scary movies and horror out there. Once in a while, I’ll get my creep on with some friends, but more often than not the concept of voluntarily being terrified for multiple hours fails to resonate with me. Maybe I am just a baby. It can be quite easy to scare me, so fans of the truly spooky can take this article with a grain of salt. Even so, the industry of bone-chilling entertainment is not what I take issue with.

It is the fetishization of violent men — and even serial killers — that has started to get on my nerves. 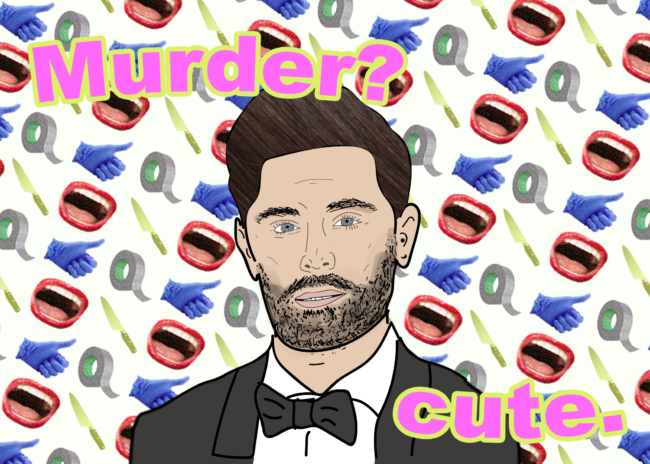 I couldn’t care less if “that hot guy from Gossip Girl” is in it or not. The fact is that I have a best friend who suffered psychological torture for months at the hands of a stalker. I cannot see the appeal in a stalker character, no matter how attractive he is made out to be.

For a while, this diatribe just felt like yet another one of my unpopular opinions that would be better kept to myself. Until I saw it being echoed across the media.

Just in case there are some readers out there who, for whatever reason, do not keep constant tabs on the movements of Zac Efron, that lovable face now wears the mask of Ted Bundy in the recently released Netflix film, Extremely Wicked, Shockingly Evil and Vile.

The movie received serious backlash for its previews alone because — other than casting a man sculpted by angels as the infamous murderer of nearly 30 women — the attempt to show Bundy from his girlfriend’s point of view turns his unspeakable crimes into the mischievous antics of a lovable scamp.

I held my tongue in high school when the girls were swooning over Tate, the psychotic murderer-rapist-ghost boy in American Horror Story: Murder House, but now I won’t.

Quite honestly, the fact that more people are not shocked and afraid of the tendency of the modern media to paint horrible, abusive, violent characters (especially men) as somehow still desirable because of their attractiveness confuses the hell out of me.

Has anyone besides me ever had the thought that encouraging young women to fetishize and admire male characters who hurt and even kill others, often young women just like themselves, might be detrimental?

Has anyone besides me ever had the thought that encouraging young women to fetishize and admire male characters who hurt and even kill others might be detrimental?

Not that I’ve been everywhere and read everything ever posted, but another voice on this issue has not crossed my path thus far, so I’m just going to say it: Women are already at such a high risk for abuse in this political climate  alone. Casting dreamy, eye-candy actors in roles predicated on harm and violence adds unnecessary fuel to the fire.

I am perfectly aware that all of this is fictional and that some audiences just love a good creep-out. Yet I still can’t help but feel that this kind of romanticization of violent men is getting out of hand.

Growing up, I learned not to talk to strangers, not to get in strange cars and to run and get help if someone started following me. But now, as a young woman in an increasingly terrifying world, I wish someone had taught me the signs of abuse. I wish I practiced spotting the people who wanted to hurt others mentally and physically from the time I could cross the street.

There’s a feeling of catharsis that comes from watching those dangerous, psycho killer films and series — trust me, I do it too. I binged How to Get Away with Murder like nobody’s business — and there’s nothing wrong with that. What scares me, though, is the growing trend of audience desire to identify with characters who commit horrible acts.

Differentiating physical attractiveness from a sociopathic addiction to violence is extremely important, if you ask me. And, not to be cynical, but in today’s climate girls and women need every tool in their arsenal just to get by safely.

I love Zac Efron as much as the next girl, but I refuse to love watching him impersonate Ted Bundy. If you watch Extremely Wicked, Shockingly Evil and Vile (which, let’s face it, I probably will too), I hope to high heaven that it scares the shit out of you. I, for one, will be scared if it doesn’t.

Jordan Curiel is totally a baby when it comes to scary things but still hopes you can take her seriously on this.