The UC Santa Barbara student-led Sunrise Movement SB held a town hall on April 23 at the Santa Barbara Earth Day Festival to advocate for the Green New Deal and answer questions from the public.

The Sunrise Movement, established in 2017, is a youth-led movement with a current priority of establishing a consensus among Democrats regarding the Green New Deal (GND). 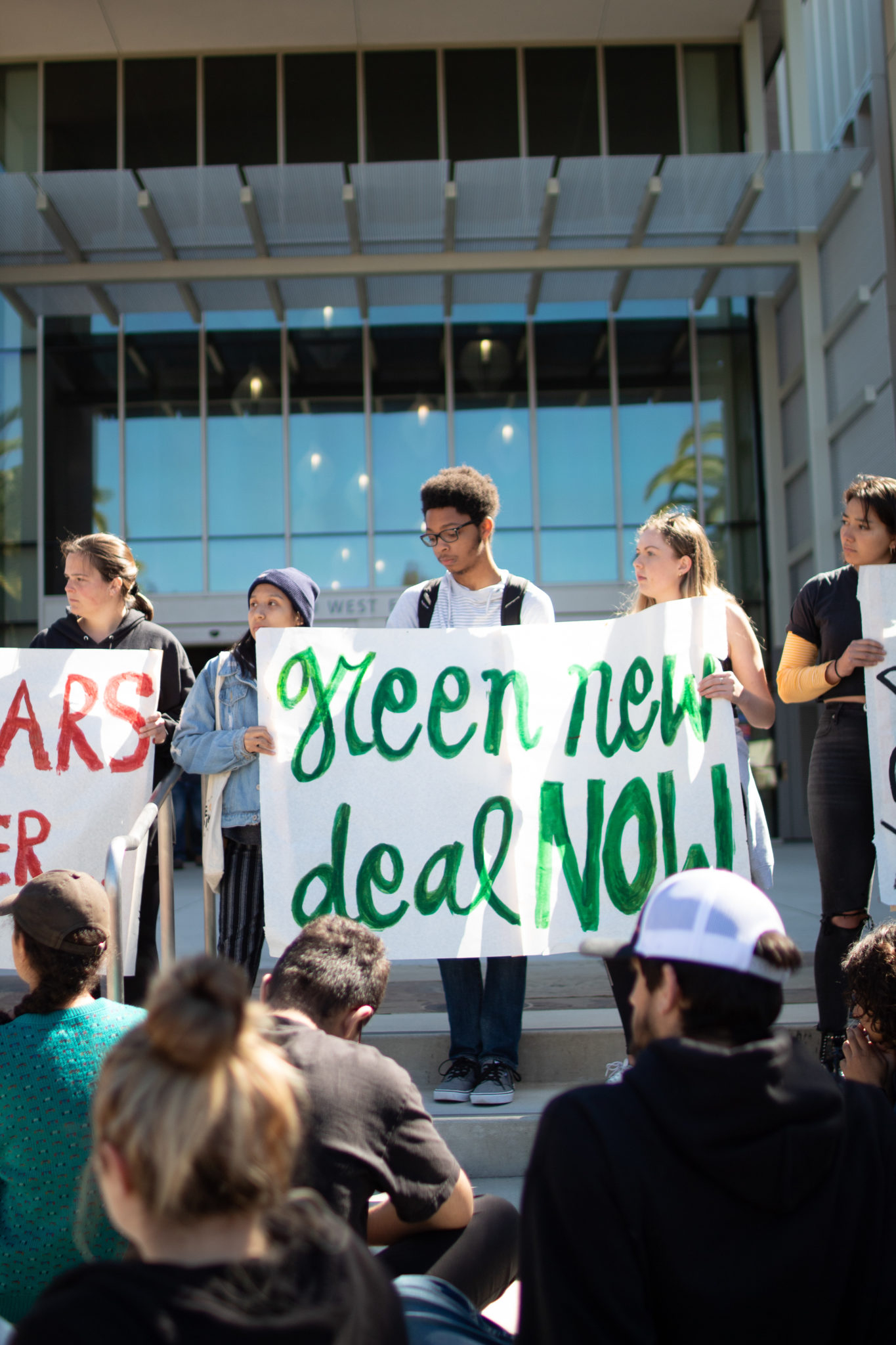 The movement held a protest on March 15 involving the Youth Climate Strike. Courtesy of Reena Nanavati

The GND intends to massively invest in clean energy and infrastructure, transforming the American economy and decarbonizing the energy sector, according to the proposed bill.  Alexandria Ocasio-Cortez, a representative for New York’s 14th congressional district, proposed the program in February 2019.

The three have since coordinated with organizations such as the American Federation of State, County and Municipal Employees (AFSCME) Local 3299 and the United States Youth Climate Strike, as well as elected officials such as U.S. Congressman Salud Carbajal and California State Senator Hannah-Beth Jackson.

The town hall opened with statements from County Supervisor Das Williams and Wendy Motta, a spokesperson for Carbajal.

A lead co-author of the Senate Bill 350 Clean Energy & Pollution Reduction Act of 2015, Williams commended California for revamping its energy sector even as the country has stagnated.

“[California is] massively decarbonizing our energy sector. We’re getting better at using solar and other alternatives. However, the urgency of the situation is real, because even as California and some other states have moved forward, the country has not,” Williams said.

“He was impressed by the aggressive agenda. He called Congresswoman Alexandria Ocasio-Cortez and told her that he would like to be an original co-sponsor of the measure,” Motta said.

They addressed questions regarding how common citizens could become involved in the movement, the subject of reparations, the specific policies of the GND and its intersectional nature.

Manski elaborated on how the different approaches to the GND come together.

“There’s the liberal version which is technocratic, and focuses on a technological shift, there’s the progressive version which in my mind is the one that Alexandria Ocasio-Cortez has done such a great job of articulating, which deals with the need to transition economically, and focuses on specific industries, and then there’s the green party one, which is systemic reform,” Manski said.

Manski emphasized the necessity of voting rights and election reform in order to democratize the U.S.

Kristian then highlighted the GND’s approach to mobilizing disenfranchised workers in middle America, similar to the original New Deal.

“Can you think of a better way to get working people on board than putting people to work doing the work that we need to do to … rebuild our environment?” Kristian said.

Berchenko spoke on the technological feasibility of the GND and how solutions already exist.

Of particular significance to Salinas O’Toole is the stance that the GND takes with regard to wilderness and open spaces.

“I grew up in DC and there we have Rock Creek Park which is polluted and disgusting and for most people that’s the only nature that they’ve ever been exposed to. It’s gotten to the point where, in our society, it’s a privilege to have access to wilderness and I think that’s intrinsically wrong,” Salinas O’Toole said.

“I believe that is at the core of not understanding what’s at stake and preventing the people’s movement.”

The panel went on to describe how one could become involved in activism and grassroots movements to avoid succumbing to despair and apathy.

“Part of that is find a group. Don’t sit at home scrolling through Facebook reading about walruses throwing themselves off of cliffs … it’s a never-ending stream of negativity and you’re just gonna spiral down a hole,” Kristian said.

Salinas O’Toole emphasized the necessity of having organizations that listen to youth and give them a voice.

“That was something that I was battling with a lot. I’d go to protests and I felt like I was super involved, but then there’d be this huge lack of response. Having platforms for young people to take hold of this issue that is affecting our generation more than any other generation is critical I think,” Salinas O’Toole said.

At the conclusion of the town hall, members in the audience were asked what they hoped would come out of the GND; people listed water use regulations, job guarantees, environmentally friendly investment opportunities and improvements in air quality.

In an interview with the Nexus, Berchenko said the two sides in the debate are not conflicts between urban and rural or liberals and conservatives, but rather the common person and corporate interests.

“In Santa Barbara county there are five major oil projects going on right now. They are rebuilding the Plains All American Pipeline which spilled in 2015, on the same route, right next to it,” Berchenko said.

“It’s the people that are actually working that are being affected and that are going to be harmed by environmental issues, versus the small number of corporations and executives that are polluting the world. We can trace 70% of all emissions, since the beginning of the Industrial Revolution, to 108 companies, 100 of which are still in operation. It’s always been the same people.”

However, Berchenko is hopeful about Sunrise Movement SB and the chance for change.

“Part of what’s exciting about Sunrise and what’s exciting about the opportunity that’s presented to us now is that a large number of very young people are getting involved in this for what’s potentially the first time. They were really galvanized by the 2016 election and by the political climate that we’re starting to see now,” Berchenko said.

“I’m excited about the history that it invokes and what it could be.”

The Green New Deal is quite possibly the worst idea ever conceived.

Really want to save the planet? Stop having so many kids. According to help dept data the highest birthrate group is …….. I can’t say it as you lefties would call me a racist.