I’m really tired of these so-called “nice guys.” I’m talking about the guys who open the door for you but then yell about “that fat ass.” I’m talking about the guys who hug you for too long, stare at the wrong places in inappropriate settings and don’t know the meaning of the word “no,” yet whose actions are deemed acceptable because they’re “nice.” Although many of us women experience similar events in our college or nightlife encounters, these actions are also present in the world around us — including in our politicians.

Recently, Joe Biden announced his 2020 presidential bid. However, even before this announcement, allegations of inappropriate behavior emerged from women across the country. Ranging from inappropriate touching to uncomfortable mannerisms, Biden has earned the name “Handsy Joe” and “Gropey Uncle” from people in both parties. In many pictures, Biden can be seen touching women on the shoulders, kissing young children and whispering in the ears of seriously confused people. Now, this might not be as explicit as “grab her by the pussy,” but behavior like this should not be accepted nor tolerated, especially from someone running for president of the United States, a position that calls for someone of a higher moral standard. 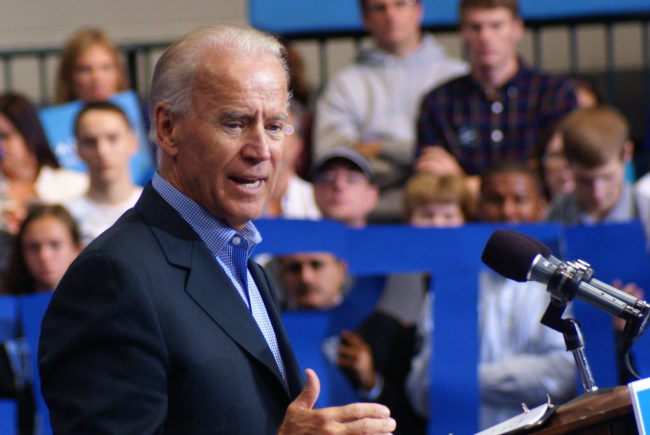 I do not write about Biden from an inherently hateful perspective. During Obama’s presidency, I thought Biden was just an adorable old man who had the cutest friendship with the former president, as seen in various selfies over the years. I never thought twice about Biden’s behavior, especially towards women. However, after naively riding the Hillary train in 2016 and living through three years of the Trump administration, I’ve realized that as voters and citizens, we need to start expecting more from our politicians. This might seem obvious, as the people we elect should reflect our own personal beliefs and values. Because this idea speaks loudly to what we Americans truly value, inappropriate behavior towards anybody should not be tolerated, ever, especially from someone in the highest possible position of power in our country.

Although the allegations against Trump are far more horrific than those against Biden, another major difference between the two is our perceptions of their actions. Across many circles, Trump is known for being a lifelong capitalist and irresponsible businessman; he is not considered a “nice guy,” which is obvious from the way left-wing news sources like MSNBC criticize him. As for me, I have never expected anything from Trump in regard to “niceness” because, well, I never really placed him on a pedestal. Joe Biden, on the other hand, is widely considered to be the frontrunner for the Democratic nomination in 2020. His actions, seen as something that reflects his age or a generational difference, are not treated in the same manner as Trump’s transgressions. Why? Because when it comes down to it, most citizens still see Joe Biden as a “nice guy.” And for these type of men, this behavior is completely acceptable.

Although Biden might come across as a nice old man who is BFFs with Obama, he fails to conduct himself in a way that is up to presidential standards.

This is evident in Biden’s handling of the Anita Hill case from his time as chairman of the Senate Judiciary Committee. In 1991, Professor Anita Hill alleged that Clarence Thomas sexually harassed her when he was her supervisor at the Department of Education and the Equal Employment Opportunity Commission. As he was a Supreme Court nominee, the case went to the Senate for a hearing. However, the controversy largely came to revolve around Biden’s mishandling of the hearings, which ranged from confusing questions to inappropriate comments from other senators. Since then, Biden has failed to apologize for not controlling the hearing and for allowing for the mistreatment of Hill because of the biased opinions of senators. Especially in the midst of the #MeToo movement, do we really want a president that fails to give women an opportunity to share their story?

What many of us fail to realize is that “nice guys” can be creeps too. Being nice to your grandma or your teachers does not give these guys the right to act inappropriately toward others — especially women. Being in a position of power does not give “nice guys” an excuse to touch a woman without her consent. We need to start asking ourselves what we truly want out of our elected officials. Although the characteristics Americans value may differ, many want politicians to practice what they preach. Although Biden might come across as a nice old man who is BFFs with Obama, he fails to conduct himself in a way that is up to presidential standards. For this reason, the public should be more critical of his behavior and the Democratic Party should not endorse him in the 2020 election.

No matter what party you lean towards, as citizens we should expect more of the candidates we choose. We should not vote for someone because they seem like the best of the worst, like many did with former Secretary Clinton in 2016 or vote for someone who is incapable of keeping his hands off of the women around him. As a Democrat, I expect my party to be as infuriated with Biden’s behavior as they are with Trump’s. Although their actions might be of different calibers, they still reflect their attitudes toward women. It is not about different generations or a difference in perception; it is about 2020 being the year that we students vote for someone who represents the qualities we look for in our friends, peers and within ourselves, because these nice guys? They’re really just creeps.

Grace Wiley hopes that in the 2020 election voters will not elect a creep into office — again.

Grace Wiley
Grace Wiley is a Global Studies and Spanish double major who is incredibly excited to be writing for the Opinion section of the Daily Nexus!

The idea that Anita Hill didn’t get a chance to “share her story” is laughable on its face. Just because they the hearings happened before the author was a glint in her father’s eye is no excuse to publish such ignorance in the information age. Biden mishandled some minor things, but he did not bar Hill from testifying or impose upon her standards unreasonable for the type of thing she was alleging. This “believe all women” stuff is a flowery way for opponents of due process to say their piece; its use is egregious especially with stories like Hill’s and… Read more »

Here’s a bit of food-for-thought. Joe Biden comes from a vastly different generation than we do – our grandparents’ generation. My grandparents are the same way, they are very warm and affectionate towards everyone. There are generational gaps that exist between ours and theirs, but ultimately, our generation is quite different. However, this generation also seems to be much more cold and cutthroat than previous ones. To shame and disparage Biden over his way of showing affection and decency is to go down a dark road. We have to recognize that yes, Joe Biden needs to respect boundaries and space.… Read more »