The Daily Nexus
Sports
Slumping Gauchos Travel to SLO for Rivalry Matchup
May 10, 2019 at 12:01 pm by Jake Ciccone 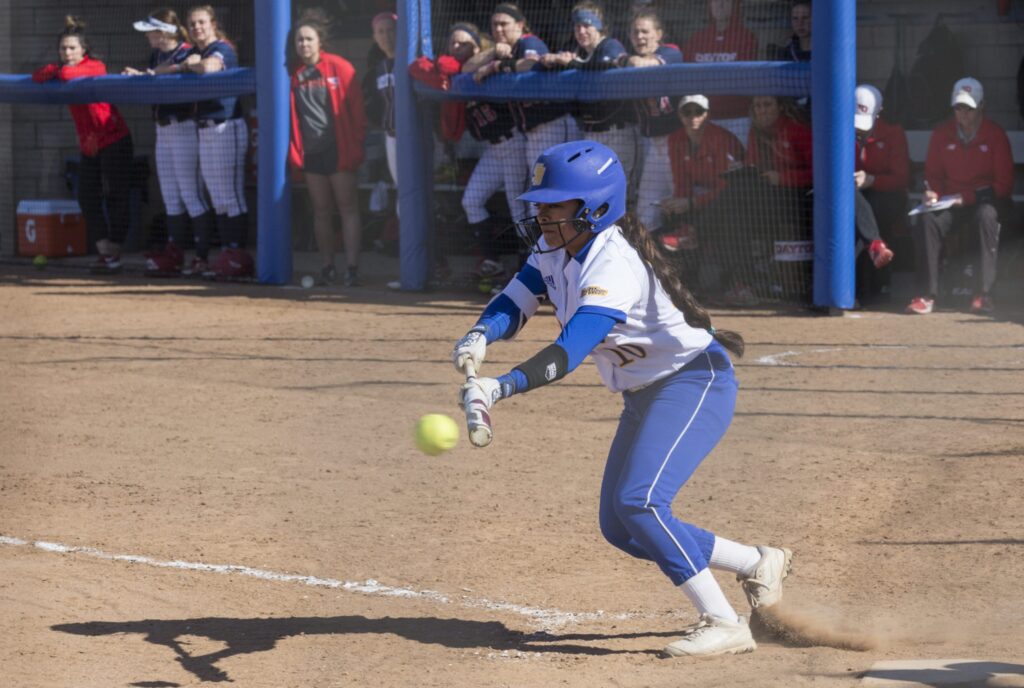 A fairly underwhelming season has left the 8-41 (2-16 in the Big West) UCSB softball team with nowhere to go but up. Coming off a sweep at the hands of UC Riverside in their final home series, the Gauchos will travel to SLO to face the Mustangs and put a stamp on another edition of the Blue-Green rivalry.

Similarly to UCSB, Cal Poly comes into the final three-game series of the season with not much to play for other than pride, as the Mustangs and Gauchos currently occupy the seventh and eighth positions in the conference standings. Cal Poly has dropped five consecutive games leading up to this weekend’s series, and UCSB has dropped its last eight, which means that this series provides a great opportunity for one of these teams to finish the season on a high note.

It is difficult to know what to expect from this series because both Cal Poly and UCSB rank in the bottom two in the Big West in terms of runs scored and earned run average, so it will be interesting to see if we get some low-scoring pitcher duels or high-scoring offensive showcases between these two squads.

One way the Gauchos could gain an advantage is if their star player, sophomore Sammy Fabian, can keep up her stellar hitting to supply the Gaucho offense with runs. Fabian hit a bit of a rough patch in the middle of conference play, but as the season went on, she found her rhythm again. Fabian led the Gauchos against UCR, going 5-11 in three games against the Highlanders. She has now recorded a hit in seven of the Gauchos’ last eight games and raised her batting average to .390 on the season.

In addition to Fabian, senior Melanie Menor has been very reliable throughout Big West play, as she is currently batting a team best .327 in conference while also leading the team with six RBI’s over that span. Menor is another Gaucho who has upped her play as of late, recording three multi-hit games out of her last five.

Pitching is one of the areas in which the Gauchos have remained consistent for most of the season. Their 4.50 overall E.R.A. as a staff for the entire season is similar to their 4.45 Big West E.R.A. However, both of these figures place last in the conference, which is a big reason why UCSB has found little success throughout the year. The good news is that Cal Poly’s pitching staff has given up the second-most runs in the Big West, so the Gauchos will not be outmatched against their final opponent of the season.

The Mustangs also have no hitters with an average above .209 on the season, with junior Hailey Martin’s .267 mark being the closest. Cal Poly does have four players hitting between .243 and .267, however, so there is a bit of depth that has to be accounted for by UCSB pitchers.

But the Cal Poly player that should worry UCSB the most is their ace starter, junior Steffi Best. Best has found a different gear in conference play, as her 3.70 E.R.A. ranks fourth in the Big West over that span. Her record is only 2-8 in Big West play, but she has thrown a complete game in nine of her 10 starts, so she definitely has the stamina to carry the Mustangs for an entire game.

The Gauchos will look to replicate the result of last year’s Blue-Green rivalry, during which they took two out of three games from the Mustangs in Santa Barbara. With no postseason implications at stake, these two rivals will be playing purely for bragging rights, which will hopefully bring out the best in both squads.

The first game of the series will be played on Friday at 3 p.m. as the first of a doubleheader at Bob Janssen Field on the campus of Cal Poly SLO.