The Daily Nexus
Student Gov
Bike Committee Opposition Does Not Change SRB Design Plans
May 9, 2019 at 12:03 am by Katherine Swartz

The Student Resource Building Governance Board voted on Friday to not add bicycle parking to the North Landscaping Design Project, against the wishes of the Bike Committee who has advocated for bike parking in the plan since it was introduced in 2018. 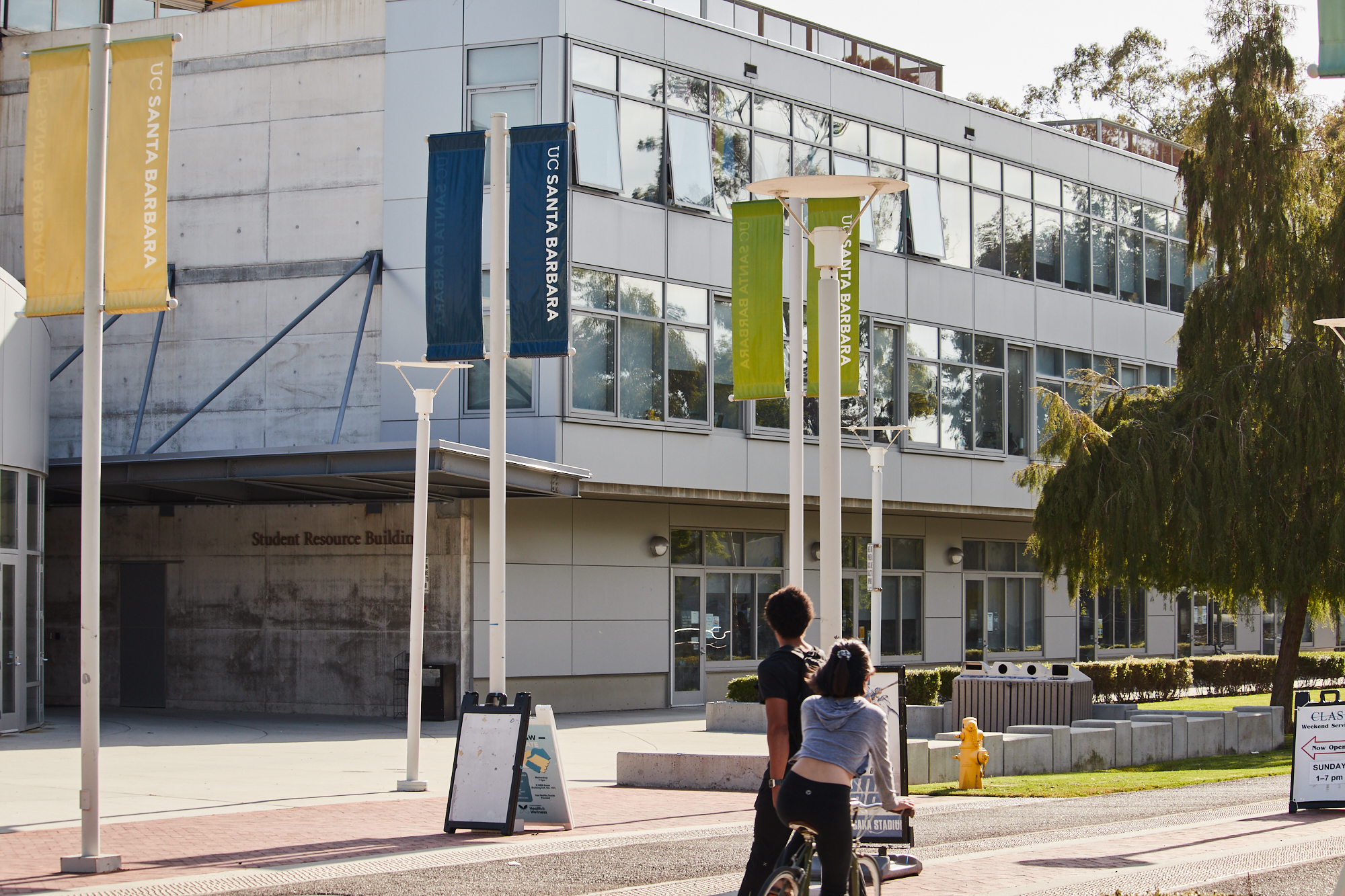 The Student Resource Building (SRB) Governance Board includes representatives from different offices located in the SRB to oversee operations. The majority of the board is composed of UC Santa Barbara students.

The decision follows last week’s Associated Students (A.S.) Senate meeting, during which the Senate unanimously passed a resolution in support of adding new bicycle parking back into the design’s plans after it was cut at the end of 2018.

“The project wants to see those spaces transformed into something that students can use for whatever purposes, be it community events or studying, to basically repurpose them so that they become more … heavily utilized,” Velasco said.

The governance board first conceptualized the North Landscaping Design Project in Winter Quarter 2018. After discovering that the initial plan for the project did not include any new bike parking, the A.S. Bike Committee began advocating for the addition of bike parking.

Annie Golay, chair of the A.S. bike committee, wrote a letter to the SRB Governance Board in Spring Quarter 2018, offering a compromise design that included 35 new bike spaces directly in front of the SRB. The governance board then agreed to the 35 new bike spaces in an updated design.

“While we would have liked to have gotten more, we felt like the 35 was a good compromise between having bike parking for students and having [bike parking] available in the safest way possible, in addition to meeting their needs for programming as well,” Golay said.

The original design plan included renovations of five major areas, which includes the lawn directly in front of the SRB, empty space in front of Parking Lot 22 and the bike path which runs between these two areas.

However, the SRB Governance Board was notified by the Campus Planning Committee within the UCSB Office of Budget and Planning at the end of 2018 that the scope of their design was not possible, according to Velasco.

“We found out that the school has future plans for pretty much 80% of the area we wanted to renovate, so now we’re only renovating a very small portion of land that’s right in front of the SRB,” Velasco said. 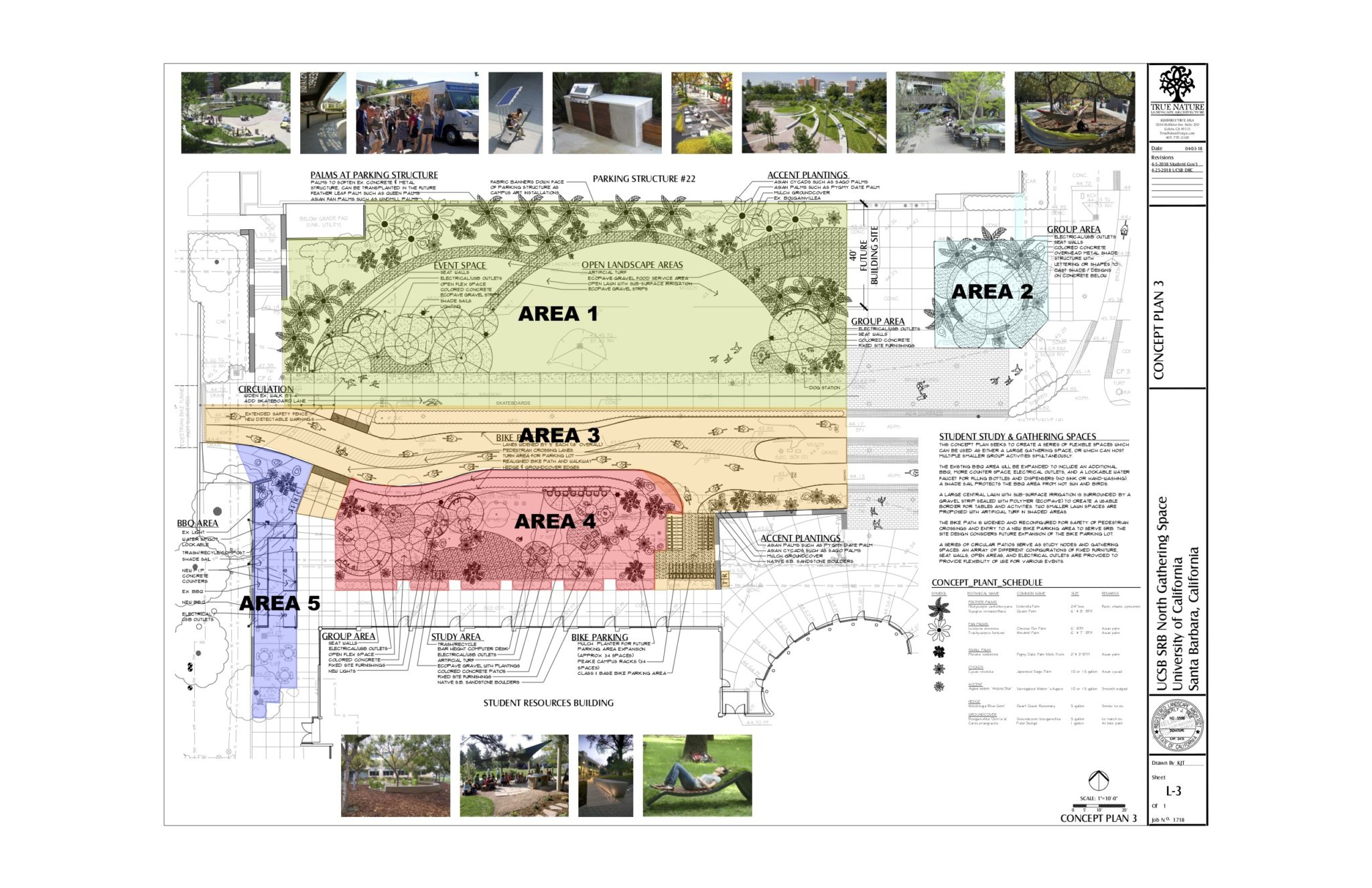 The SRB North Landscaping Design Project design from May 2018. Only Area 4 is part of the current design. Courtesy of Annie Golay and Ricardo Uribe

When the project was minimized, new bike parking was removed altogether.

“We knew we needed to act fast because we felt that bike parking is a huge problem on campus and our job as a committee is to make sure we have appropriate infrastructure and bike parking available for students, because bike parking is such a vital part of our campus,” Golay said.

The A.S. Bike Committee wrote a second letter to the SRB Governance Board on March 1, spoke to board members at multiple meetings and helped draft the A.S. Senate resolution that passed last week.

Ricardo Uribe serves as both a Letters and Science Senator as well as a board representative for the Resource Center for Sexual and Gender Diversity. He believes that the student support from the resolution did not change the outcome of current design plans.

“Obviously that resolution shows that there was some sort of need for this space … I think that the resolution didn’t have an effect that it attended to,” Uribe said.

At last Friday’s SRB Governance Board meeting, three different propositions for the design project were presented: either add bike parking, wait until other future projects planned by the university for the area were completed or move forward with the SRB Design plan without bike parking.

The board voted 11-2 to move forward without bike parking.

The two board members who voted in favor of bike parking are both affiliated with A.S.: Alexis Xa, the A.S. representative on the SRB Governance Board, and Uribe.

Golay, who spoke at Friday’s governance board meeting, believes the current amount of bicycle parking is insufficient and causes a safety threat to students going to the SRB.

“Because students have to pass all these bike lanes to get to the SRB, it is really dangerous, and that lot is already over-subscribed,” Golay said.

“We think the safest and best option is to include at least a few bike parking spaces at the SRB, because currently none exist, and we’re concerned about the safety and needs of students.”

The main priority of the SRB Governance Board, according to Velasco, was to begin work as soon as possible on the SRB North Landscape Design Project. If bike parking was added, a new redesign would be required, pushing the project back by another year.

On June 7, the SRB Governance Board will vote to approve the final cost of $560,000 for the project. If this measure passes, construction will begin in summer 2019.