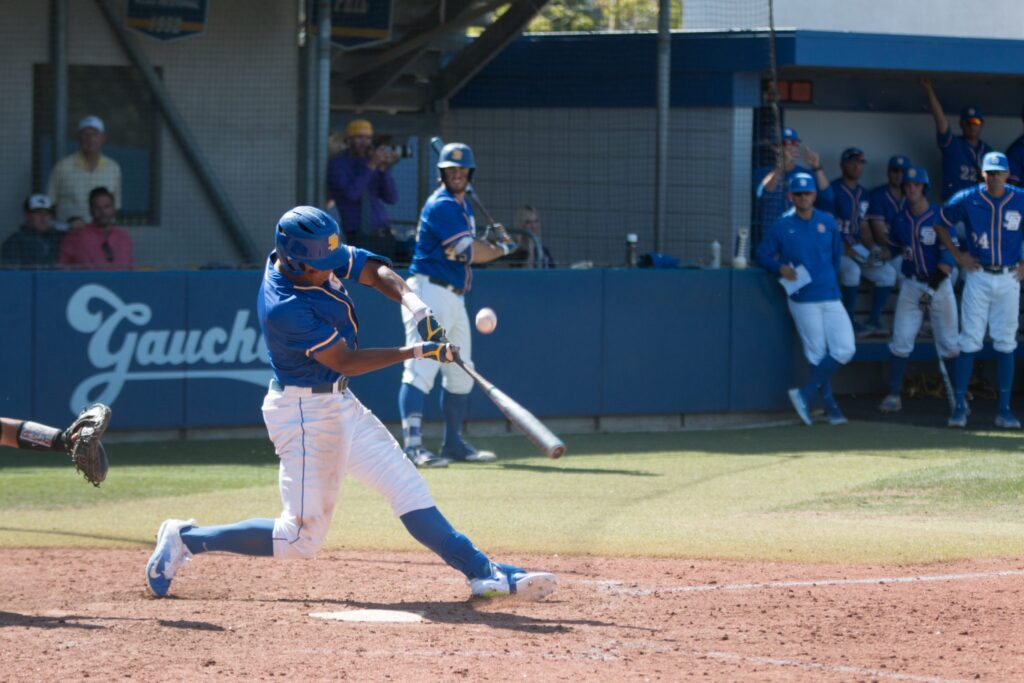 Junior right fielder Armani Smith belted his 10th home run of the season Tuesday, a three-run shot in the sixth inning, that pushed the No. 7 UCSB baseball team in front and saw them run away to a 6-3 midweek win over St. Mary’s.

“I knew with a runner on second and third I had to get the ball elevated and he led with a fastball up over the plate and I stuck my bat out and [the ball] happened to out,” Smith said.

The Gauchos are now 37-7 overall and have won six straight games. The team has also won 15 consecutive contests at Caesar Uyesaka Stadium, just two short of a tying the program record that was set back in 2016, the same year UCSB went to the College World Series for the first time.

As for the Gaels, they drop to 27-19 overall and end up splitting the two-game series with UCSB.

Smith’s home run was the hit the put the Gauchos in front, but overall the team was stellar from the plate again totaling 10. That marks the 23rd time this year UCSB has earned double-digit hits in a game owning a record of 20-3 in those contests.

Smith also bumped his hit streak to nine games which has also seen the junior total 10 RBI’s in that stretch.

Still, the first inning was a bit of trouble for the Gauchos and left-handed pitcher Jorge Arellano Jr. After getting the leadoff man to fly out, the redshirt freshman allowed two singles and walked the next two batters giving St. Mary’s a 1-0 lead with the bases juiced.

Arellano Jr. worked his way around the jam, striking out the next batter and forcing the last one to pop out to only go down 1-0 to start.

In the bottom of the second, sophomore Andrew Martinez tied the game at 1-1 with a solo shot to left center. He would finish the day going 2-4.

The tie game would not last long, however, as in the top of the third, junior Kevin Milam hit his seventh homer of the year to give SMC a one-run lead again. Milam has been on a tear for the Gaels lately as he has homered in two straight now and has gone 6-16 (.375) in his last five contests.

The sides would then trade scoreless innings until Smith’s big fly in the sixth which was made possible after catcher Eric Yang was hit by a pitch and Thomas Rowan lined a double earlier in the frame.

Smith went 2-4 in this contest legging out another triple this season pushing his total to eight on the year, just one off the single-season record.

“That last triple I hit, even if I was out I was going to go for it. You have to take chances and that record is in the back of my mind and it is something I want to break,” Smith said.

Ultimately, Smith’s home run really did prove to be the difference as St. Mary’s pulled within one in the eighth after an RBI single from sophomore outfielder Joe Vranesh but never managed to tie or take the lead again.

In fact, UCSB stretched its lead in the bottom half of the eighth out to 6-3 following a two-run single from junior Tevin Mitchell.

Junior right-handed pitcher Chris Lincoln tossed the final 1.1 innings of the game — impressively striking out all four batters he faced — to earn his 13th save of the year. The Moreno Valley, Calif. native is one save away from tying the save single-season program record.

Junior righty Connor Dand picked up the win improving to 3-0 this year after coming in relief for Arellano Jr and tossing 2.1 scoreless innings. He allowed just one hit and struck out two.

UCSB will begin a three-game series against LBSU at 3 p.m. Friday, May 10 at Caesar Uyesaka Stadium.