The Daily Nexus
Music
Freddie Gibbs Intoxicates Velvet Jones with Masterful Set
May 2, 2019 at 5:41 am by Konrad Neithercutt

The Gary, Ind., gangster rapper returned to Velvet Jones last Thursday completely in the pocket. In fact, he seemed like someone who could never in any way be shaken from the pocket, doing things like going a capella on his hardest verses while still making them sound like butter and challenging the crowd to keep up.

The world needs more rap shows like this — more rap shows that don’t stutter. That night, no one’s favorite lyrics were skipped, muffled, tripped over or mangled. The smoothness of Freddie Gibbs’s performance appeared to be unconscious, perhaps something to do with him having woken up just before taking the stage. After he came out singing “Now & Later Gators,” quite possibly the closest thing to a soul song in any gangster rapper’s discography, he explained, “I’m higher than a motherfucker, I just woke up.” He added, to doubtlessly anticipated whoops and cheers, “I don’t know what the fuck I smoked, you know what I’m saying, some California shit.”

That is not to say, though, that his performance was sedated. If you’ve ever heard a Freddie Gibbs song, you are familiar with the liquid intensity that permeates his music, warped to whatever flow he is masterfully steering at any — any — moment you might pick out. His music is more engaging than it is hypnotic. It pulls you in, not down.

There was no tension to speak of between man and crowd; they had some sort of unspoken agreement that prevented any of that. It was mutually understood that everyone was simply there to wild out to, as Freddie Gibbs put it, “some gangsta shit.” And that is exactly what they did.

It didn’t take long for Gibbs to get to cuts from Piñata, his iconic 2014 collaboration with Madlib. After “Still Livin’” and “Eastside Moonwalker” warmed the room all the way up — along with playful interludes involving his trademark check-in, “Make some noise in this motherfucker,” and call-and-response go-tos “Say fuck po-lice, fuck po-lice” and “I say E-S, you say G-N: E-S, G-N…” – Freddie Gibbs did “Thuggin’.” And he didn’t just do it. He did it a capella — the entire thing. A full three minutes of three relentless, bare-knuckle verses with no beat to back them up. And it murdered. The number of people rapping along throughout it was no small surprise. To say the least, Santa Barbara is not a hip hop city — many more UCSB students would rather listen to EDM on a knockoff Bose Mini speaker than pay more than five dollars for a rap concert ticket. But this crowd was different. I could only count one tank top-donning, bleach-blonde individual among them. The hip hop heads showed out for Freddie Gibbs.

And he had them rocking. For the rest of the night, the building was all in. Other Piñata tracks “Harold’s” and “Deeper” surely elevated the crowd’s hype for Bandana, the follow-up Madlib collaboration project set for release later this year. What followed was a filling setlist of banger after banger after banger, most of it coming off his 2018 commercial mixtape and latest non-single release, Freddie (as for his latest single releases, check out “Flat Tummy Tea” and “Bandana” if you haven’t already!)

The world’s best charismatic, cold-blooded rapper seemed to be having fun. In between an earth-shaking “Triple Threat” and a raw and reckless “2 Legit,” he started singing lines from the latter’s Mary J. Blige sample and joked, “Fuck this rap shit, I’m tired of it. I’ma do R&B.”

He could pull it off, too. The man seems to make no wrong moves as of late. With more music already on the way, 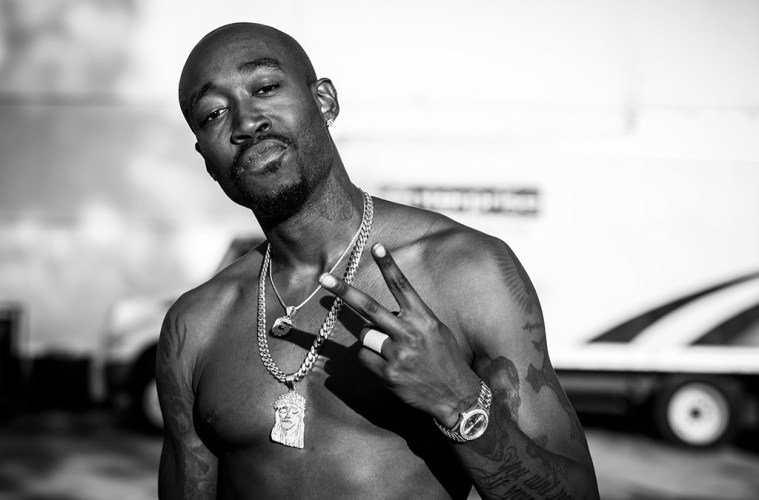 Courtesy of The Rap Fest