On Wednesday, the External Vice President for Statewide Affairs candidates spoke to students in the Hub at the 12 p.m. forum, describing their qualifications and speaking to why they are running.

The two candidates – third-year history of public policy major Alexandra Leal Silva and second-year sociology major Daevionne Beasley – both referenced their histories of lobbying for students needs, as well as their past histories within the External Vice President for Statewide Affairs (EVPSA) office. 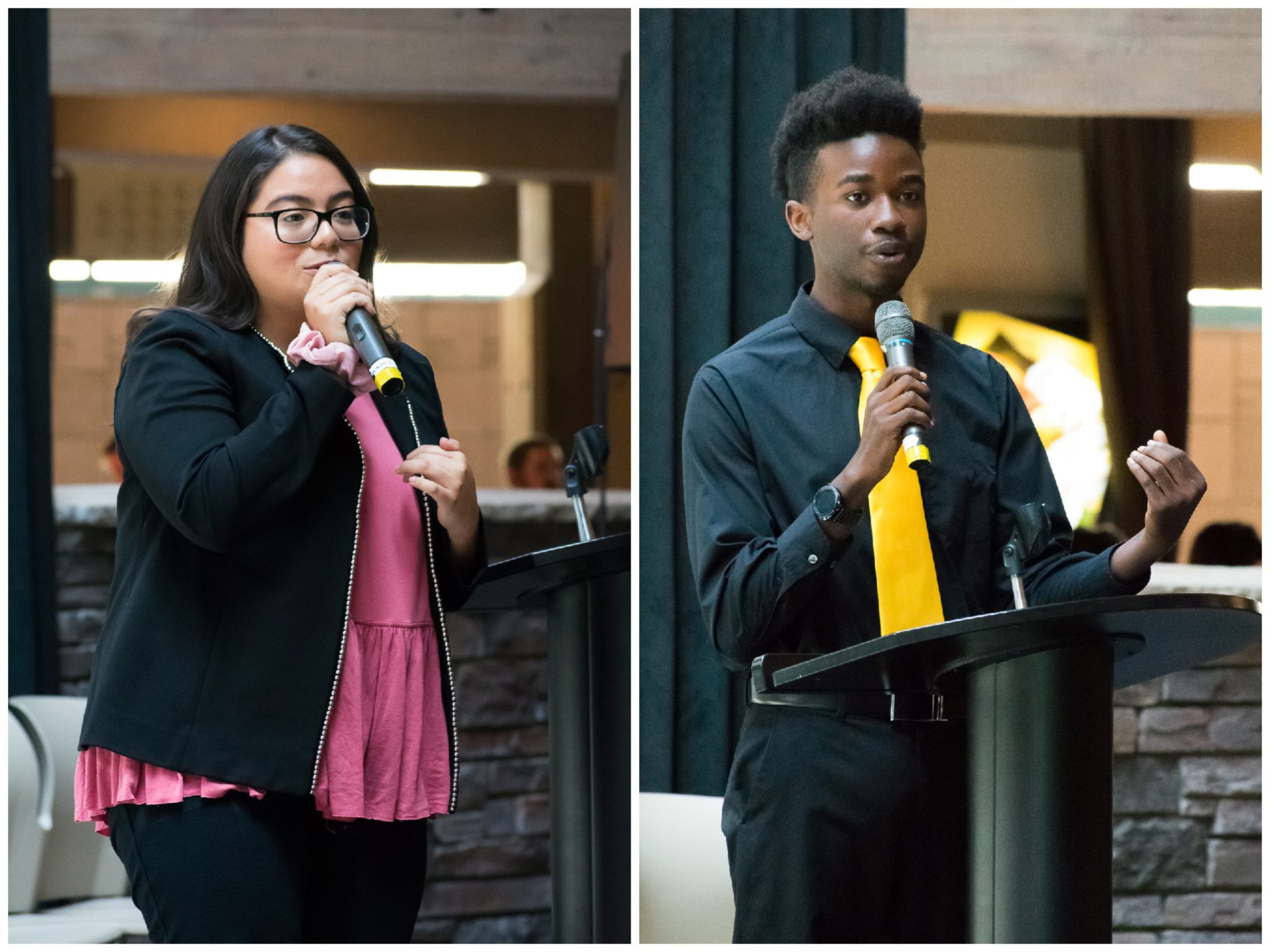 The questions asked by Elections Board and answered by the candidates can be found below:

Why did you decide to run?

Beasley said he ran because he wants there to be more of a leadership role in the United States Student Association (USSA) organization, particularly because UCSB students pay the most in student fees towards the organization. He also noted that the general student body “isn’t necessarily up to par” on what the organization does and where student fees go, so he wants to change that and make sure students voices are “head at a state-wide and national level.”

Leal Silva said she has been working within the EVPSA office since her first year at UCSB – first as an EVPSA fellow, then as a community organizing director, and then as the legislative director – and now feels that she now has enough experience to run.

Do you have any experience organizing UCSB students at the statewide level, such as lobby, or with UC wide-work? What have your experiences shown you about some of the issues facing students today?

Leal Silva said she has had a lot of experience lobbying for students, again referencing her past three years in the EVPSA office. She further noted that she is a member of Lobby Corps, and has been organizing student trips to the U.S. Senate, the legislator and Capitol Hill through this entire past year.

“They need to hear where they’re at because they are living in this bubble, this congressional bubble. I’m going to be able to pop that and say, ‘hey, we are your students. We are who elected you and you need to be able to listen to us and take our student concerns into value.’”

Beasley referenced his work on Senate Bill 3153, a bill to extend the Cal Grant into summer sessions, stating that he and other students would “drive up to Sacramento at ungodly hours to testify at these hearings and train different students on what they’re testifying on behalf of UC.”

“I’ve really seen the beauty and power that comes with organizing students. I absolutely love it and I appreciate every moment of getting to help students fight for the fight.”

Can you name some of the communities on the UCSB campus that you believe are the most marginalized? As the new EVPSA, how would you attempt to amplify these voices that you have mentioned and how do you ensure that students of all backgrounds are represented?

Beasley said Black students are the most marginalized community at UCSB, making up 4% of the campus. He said Black students don’t get the same institutional support that other groups may have, and said that either he or someone on his staff would be in attendance at Black Student Union (BSU) board meetings.

He said that while he cannot speak to the experiences of other marginalized students on campus, he would make sure to compose his office of people from different backgrounds as to increase representation.

“When it comes to legislation… on the floor right now, to reaffirm the standards for deadly force for police officers and UCPD and California as a whole, we really need Black students to advocate on behalf of themselves and on behalf of the community.”

Leal Silva said she wants to listen to all voices on campus, and would take those concerns to the “state, to the federal government, to the Regents because [everyone’s] experiences matter.”

“The EVPSA is a servant to its community. It’s time to take that to the next level and I’m ready to serve my students at any capacity.”

In the past year, have you had any direct involvement with the EVPSA office, and whether you have or not, what would you change about the office?

Leal Silva repeated that fact that she has been in the office these past three years, noting the hardships that came with not having an EVPSA this past year. She added that her work as a Resident Assistant and as a UCSB tour guide gives her a “unique perspective” and further knowledge as to how to serve students best.

Beasley also referenced the lack of an EVPSA during this past year, stating that “put students in a very hard position.” He added that the lack of someone in that position forced students into “non-institutional routes” to try and make change.

He said he worked with 2017-2018 EVPSA Kristin Hsu during his first year, going on lobby trips and advocating for extending the Cal Grant.

Beasley said it’s “absolutely incredible” that UCSB has one of the highest registered voters out of any campus in the nation. He said that while civic engagement is already very important to UCSB students, that would be expanded to work with more organizations on campus by tabling and registering people to vote.

“I know you might feel a little bit discouraged with the political climate right now, and it’s very easy to think that, ‘oh, national or any type of election doesn’t matter [because] our voices aren’t heard.’ But I’m here to say… that is not true. Each and every single voice counts.”

Leal Silva referenced the UC coordinator position within the office,  who “works tirelessly throughout the year to reinvigorate the [registration volunteer coalition program].” She added onto Beasley’s point by stating that she will expand that role, while also working to include the voices of students who don’t have the ability to vote.

How do you plan on getting students interested in attending EVPSA functions such as Regents meetings?

Leal Silva said that accessibility has been an issue not just within the EVPSA office, but within A.S. overall. She said she would work to be as “transparent as possible.” She also noted that the office should table toward the beginning of the year in order to gauge issues that students care about, and then set up a system that would alert them when the office is doing work on an issue they care about.

“The work that these students are doing is fueled by passion and grit and the will to serve, and we need to be able to highlight that and show students, ‘these are what your students are doing. This is why they care. This is how you can get involved.’”

Beasley said his work as a Resident Assistant allowed him to see that marketing is the key to making sure students attend events. He said he wouldn’t let students know about events through “a robotic way, like through email.”

Considering the budget restraints nationwide, what specific portion of the budget and Higher Education Act would you advocate for?

Beasley said specific numbers cannot be counted until it is known how much tax revenue California has.

“The nation as a whole needs to prioritize education, needs to put that at the forefront, because education builds the leaders for tomorrow… Education is a right and people need to be educated on the issues that they’re fighting for.”

Leal Silva referenced California Governor Gavin Newsoms’ budget that was released earlier this year. She noted that while his goal for the UC system to intake more students is “fabulous,” it is ultimately hard to accommodate more students because “we can barely accommodate the ones we have.”

What would be the very first issue you will tackle if you are elected as EVPSA?

Leal Silva said the first thing she would tackle is financial aid expansion. She added that she wants to bring back the pell grant and wants to look into expanding the middle class scholarship.

“Without financial aid, I wouldn’t even be standing up here. You want to talk about subsidized housing, food stamps? That is me. Still will probably be me for a while, but it’s because of financial aid that I’m able to attend this university.”

Beasley said he wants to make sure that marginalized students’ voices are “uplifted and heard.” He said that, if elected, he would “bring these people that are often put at the bottom of the social hierarchy and make sure they’re brought to the top.”

“We can’t have one person of color or one marginalized student there and expect them to advocate on behalf of everyone that’s not present. My first task in the office will be making sure that I have a diverse enough staff to be able to bring some of the issues [to me] that need to be talked about.”