The second day of UC Santa Barbara’s Associated Students candidate forums included the transfer senator candidates, with both Robert “Robby” Aceves, a third-year Chicana and Chicano studies major, and Kevin Sway, a third-year sociology major, making their cases to the audience in the Hub. 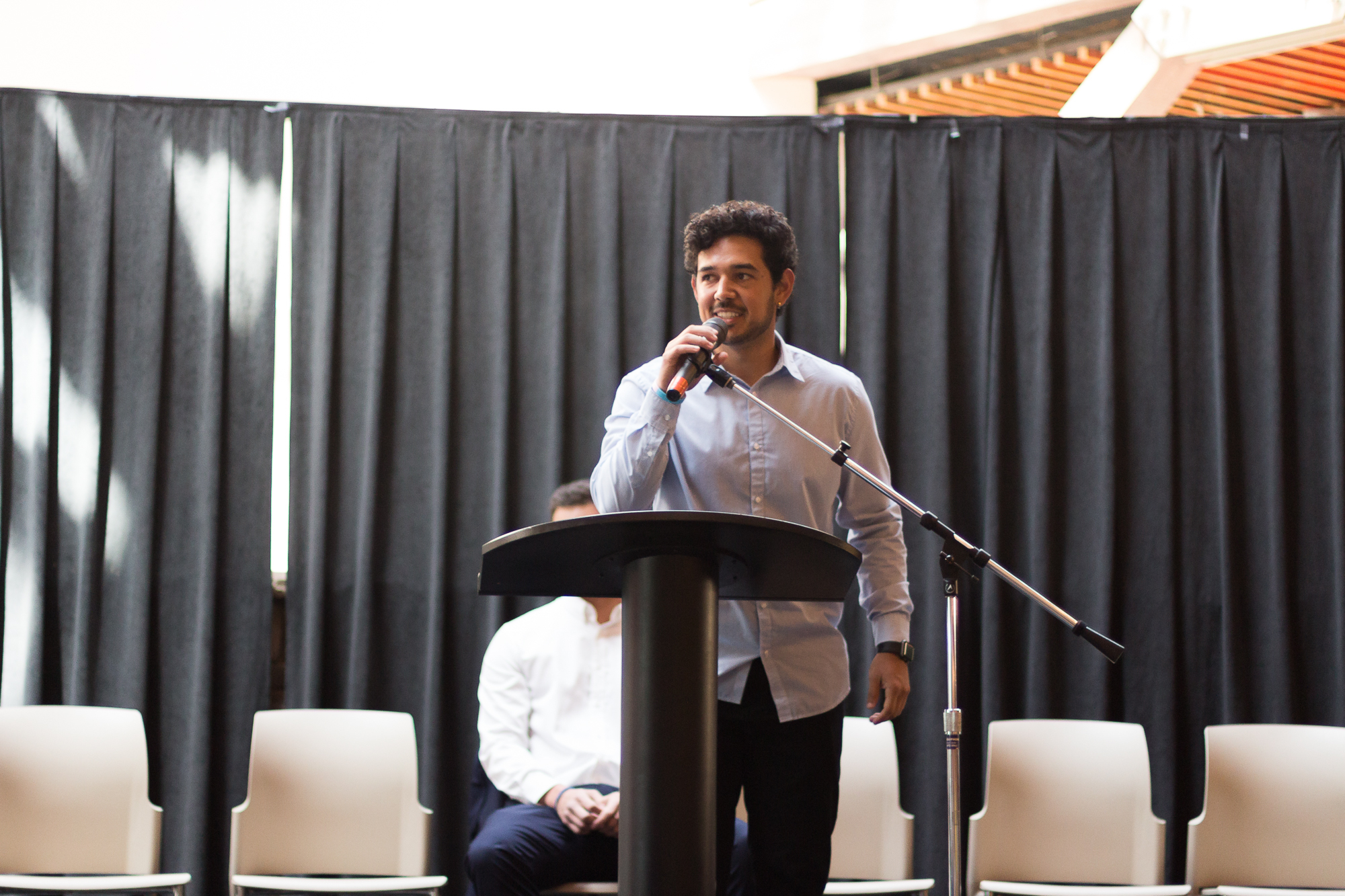 Both candidates spoke to their qualifications and experience. Andrea Verdugo / Daily Nexus

Below are the questions they were asked and a summary of their answers:

What do you believe is the greatest issue facing new transfer students?

Sway said transfer students have “a hard time acclimating into UCSB culture” and that he believes the greatest issue transfer students face has to do with registering on G.O.L.D. and keeping up with course load.

UCSB has a 91% transfer retention or graduation rate. That means that 91% of transfers either stay at UCSB or graduate after their first year. This also means that 9% of transfer students end up not attending UCSB anymore after their first year. What plans do you have to increase the transfer retention number so more transfer students end up staying at the university?

Sway repeated that retention rates have to do with “acclimating into the UCSB culture” and navigating through the course load at UCSB. He added that he hopes to establish a transfer student/alumni mentorship program.

According to the Associated Students (A.S.) Legal Code, the transfer senator must attend all Transfer Student Alliance organization meetings every quarter. Have you ever been to a meeting ran by the Transfer Student Alliance (TSA) or have you ever been to a meeting by a similar transfer-focused organization? If so, can you name one program run by this organization that you believed helped improve the transfer experience at UCSB?

Sway said he has been attending TSA meetings for the past quarter. He is also on the Transfer Graduation Committee.

Aceves said he was an active member of TSA during fall quarter, and that he hosted a pep rally before a UCSB soccer game for the organization. Aceves mentioned that being a part of the Educational Opportunity Program (EOP) as a transfer student has helped him access resources and build community, and he believes that EOP can do the same for other transfer students.

How will the two-party system of campaigning affect you when you take office? Do you believe you’ll be able to work effectively with the members of the other party or other independents?

Sway said the two-party system is filled with “a lot of drama,” and that he likes to distance himself from that drama. He added that “everyone here definitely very deeply cares about the UCSB community and their constituents” and he hopes to continue with that sentiment if elected.

Aceves believes working with another party will not affect the platform points he is trying to push for. Aceves emphasized he is fighting for the transfer community as a whole.

Many transfer senators have said that it has been intimidating coming from a junior college straight into a large university like UCSB, which has tons more people and more challenging upper-division classes. What would you do to change this culture shock and help transfers fit in better during their first quarter here?

Sway acknowledged the difficulty of jumping into upper-division courses right away as a transfer student and discussed the “negligence of orientation,” adding that the counseling opportunities were limited. Sway hopes to “revamp and reinvent” orientation and Gaucho FYI, a mandatory workshop that UCSB students have to take, to be more “transfer friendly.”

Aceves said providing transfer students with a sense of community as soon as they arrive at UCSB will help them acclimate.

UCSB offers several on-campus resources that many students don’t even know about, such as the Collaborate Print Labs that offer 200 free prints a quarter. Name any on-campus resource that you believe transfer students, as a whole, could learn about and perhaps take advantage of.

Sway believes the Transfer Student Center is a resource the transfer student community could take advantage of.

Being a student can be extremely stressful. Students have to juggle three or more classes with all of their extracurriculars. Do you believe that we should expand mental health resources on campus at C.A.P.S.? If you do, what is your plan?

Sway said he wants to see Counseling and Psychological Services (C.A.P.S.) expanded, and wants to implement a transfer-specific C.A.P.S program at UCSB.

Aceves said the TSA created “a small group” that is working with transfer students and C.A.P.S. and he wants to expand on that. He did not specify further.

92% of UCSB transfer students come from community colleges. Can you talk about your own transfer experience? What advice would you give to a student who’s about to go into their first year in junior college and wants to eventually transfer to UCSB?

Sway spoke to his experience coming from a rural community in Northern California, adding that his community college experience was difficult and isolating. His advice is to not stress too much about where you want to transfer and how you are going to do academically— instead, you should focus on “incorporating yourself into your new community and environment.”

Aceves said his experience has been amazing, and that he has been welcomed into many inclusive communities who want to help him succeed academically and socially. His biggest piece of advice to prospective students is that asking for help isn’t bad, because there are many people on campus who want to help.

What do you think about the class sign-up process on G.O.L.D.? In the past, students have recommended a shopping cart on G.O.L.D. where students can favorite classes that they want to take before their pass time. Do you believe that G.O.L.D. is currently a convenient way to choose your classes or could it be better?

Sway said that navigating G.O.L.D. as a transfer student is difficult and believes that G.O.L.D. should be “reorganized to be more streamlined and better oriented for new users.” He believes  the waitlist process should be reformed.

Aceves also said navigating G.O.L.D. is challenging, and he believes Gaucho Transfer Fridays and transfer orientations could be reformed to further help transfer students navigate G.O.L.D. He added that workshops could also be implemented.

Many transfer students say that they have trouble finding advisors to help guide them through the first quarter at college. Do you believe that increased advising services would improve the transfer experience?

Aceves believes in expanding advising, but he emphasized that in order to address the needs of the transfer community, advising cannot only be available on campus. He mentioned working with Resident Assistants to allow advisors to promote services to transfer students.

3,000 visitors come to UCSB’s Resource Center for Sexual and Gender Diversity each year. How do you plan to advocate for and uplift the voices of LGBTQ students? What will you do to contribute to making UCSB a space where LGBTQ students feel safe in their communities?

Sway said that while he is not a part of the “LGBQT community,” he is “more than willing and able to listen to any of their concerns” and “would love to advocate for them on their behalf.”

Aceves believes in being an ally to the LGBTQ community and in “allowing for spaces that are inclusive to everyone no matter how you choose to identify.”

Given that UCSB is ranked as the No. 5 public school and the biggest thing in our way from achieving a higher ranking is our “party school reputation,” how do you plan on curtailing our party school reputation and have us better recognized as a school focused on academics for prospective students in California and for out-of-state/international/transfer students?

Sway said one of the most enjoyable things for him has been “the amount of options every given day on what to do… not only is the school [recognized] as a party school, but we are ranked now [in the] top five in public universities and I believe that’s a great thing, because not only are the people able to party hard, but they’re also able to play hard too.”

Aceves said “a way to move away from this whole ‘UCSB is a party school’” is by “exposing ourselves to environments that are…challenging us academically, like attending conferences… I think that’s a big one, just being there and showing that our university is pushing and we are academically competitive and we’re pushing for new breakthroughs.”

What would your first line of action be if you are elected?

Sway hopes to advocate for community composting at UCSB by working with the Isla Vista Compost Collective, A.S. Recycling and existing community gardens.

Aceves, once again, emphasized that he wants to reform transfer orientations to highlight resources for transfer students.