The Daily Nexus
Student Gov
Recap: Sole IVP Candidate Speaks to Experience and Platform
April 19, 2019 at 10:02 am by Simren Verma

The second day of candidate forums for the Spring Quarter 2019 Associated Students elections took place on Tuesday afternoon, with the collegiate senator forum beginning the day and the Internal Vice President forum wrapping up the day.

Alli Adam, a third-year political science major, is the sole Internal Vice President (IVP) candidate and was, therefore, the only candidate to participate in the IVP candidate forum. 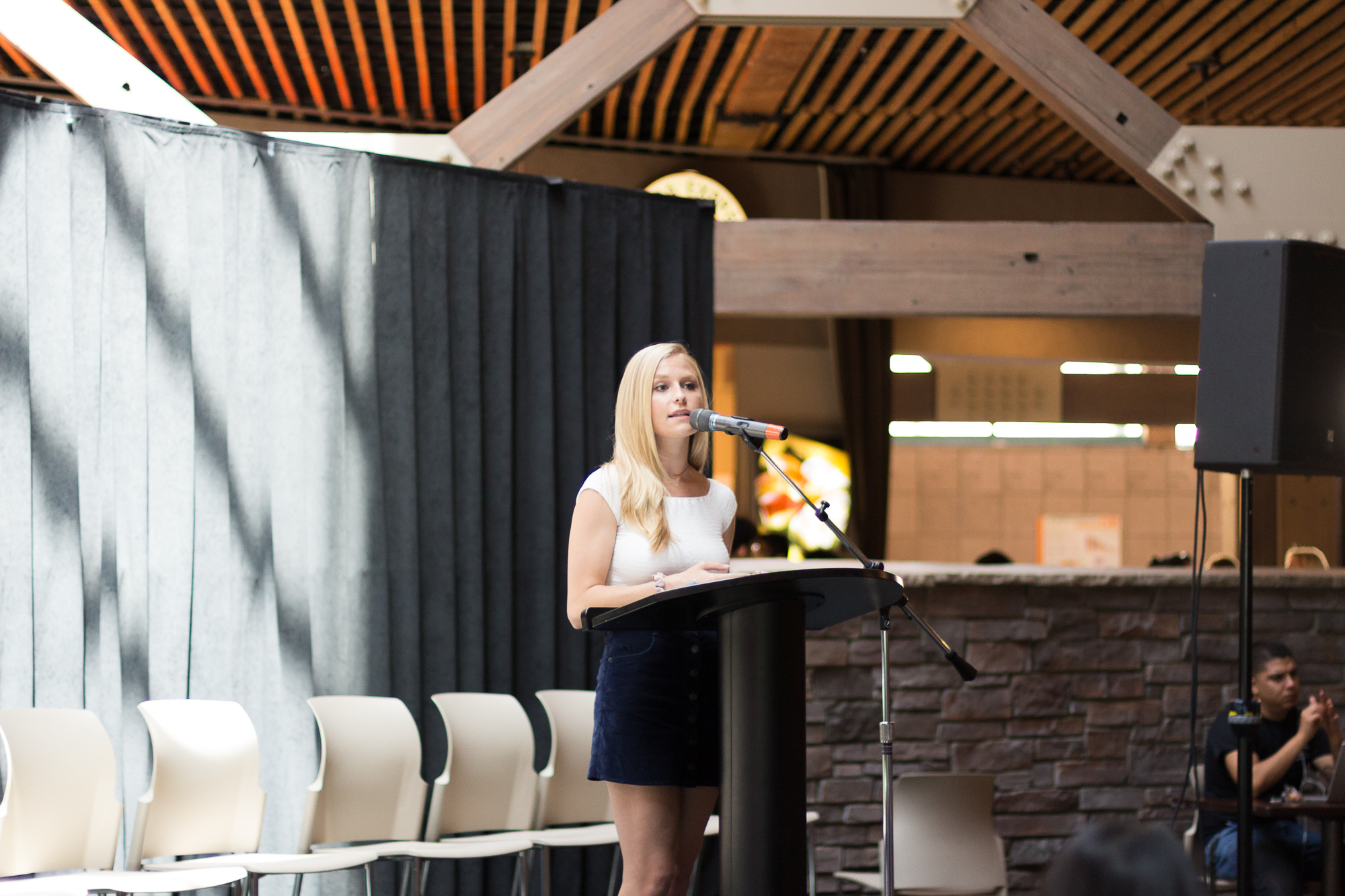 Adam is the sole candidate running for the position. Andrea Verdugo / Daily Nexus

The IVP presides over the Associated Students (A.S.) Senate and has the power to serve as a tie-breaking vote. The IVP is also responsible for providing the A.S. Senate with various trainings and facilitating the completion of A.S. Senate group projects.

The forum consisted of Adam answering A.S. Election Board’s questions for about 20 minutes.

During this time, Adam spoke to her qualifications to serve in the executive position, noting that she has been a College of Letters & Science Senator this past year. Adam added that she has attended all but “one or two” A.S. Senate meetings.

Adam emphasized that her main goal is to implement trainings as soon as senators are sworn into office so they know “what is expected of them.”

Adam also plans on having either herself or her first and second pro tempores hold one-on-one meetings with senators every quarter in order to check in on the projects they are working on.

Adam believes the public should play a large role during Senate meetings and referenced a resolution she authored earlier this school year which called for scheduling public forum at the beginning of all Senate meetings.

She said she authored the resolution “so members of our community are encouraged to come and speak to their representatives and don’t have to guess what time to come at.”

Adam also mentioned her experience as a senator liaison to Take Back the Night, which is an anti-sexual violence organization, and The Bottom Line.

“I think I have effectively worked with those groups and really made sure they know what the Senate can do for them,” Adam said. “I’ve helped them update legal code; I publicize their events.”

Adam identified the largest internal problem within A.S. as the everyday student not knowing what A.S does.

“In my time [in A.S.], [A.S.] has had this recurring problem that we only benefit and we only really interact with those who are already involved with A.S.,” Adams said. “We really need to do a much better job at getting awareness and our resources and our benefits to the students who aren’t already involved with us.”

Adam wants to work with other executive offices to create an A.S. mobile application that would consist of all of the A.S. resources incoming first-year students need. The students could download the app during orientation.

In terms of what has prepared Adam to chair Senate meetings, Adam referenced her public speaking skills, adding that she has participated in Mock Trial, debate and musical theater.

“I have no problem taking command of a room and really asserting control so that Senate is running more efficiently, that members of the public are respected and so that everyone in the room is taking space and making space and being heard when it is allowed.”

In response to how Adam would maintain civility while leading a Senate with members that come from two different political parties, Adam said she plans on being nonpartisan and neutral.

Adam then went on to discuss how she would conduct trainings differently than how they were conducted this past year.

“This past year, our trainings didn’t come until the middle of winter quarter, which not only stifled how productive we could be, but it’s also against legal code.”

Adam said she would make training a priority.

Adam went on to discuss the connections she has developed with UCSB administration, stating that she served on the Faculty Executive Committee and was an intern at the Mosher Alumni House.

Adam’s first line of action, if elected, would be to create a mission statement for the 70th Senate.

“I want [the mission statement] to be a physical banner that we hang in the Flying A room every Wednesday night, so there is a clear standard and clear purpose [so] that all senators know why we are here… so we start off on the right foot regardless of how elections go.”