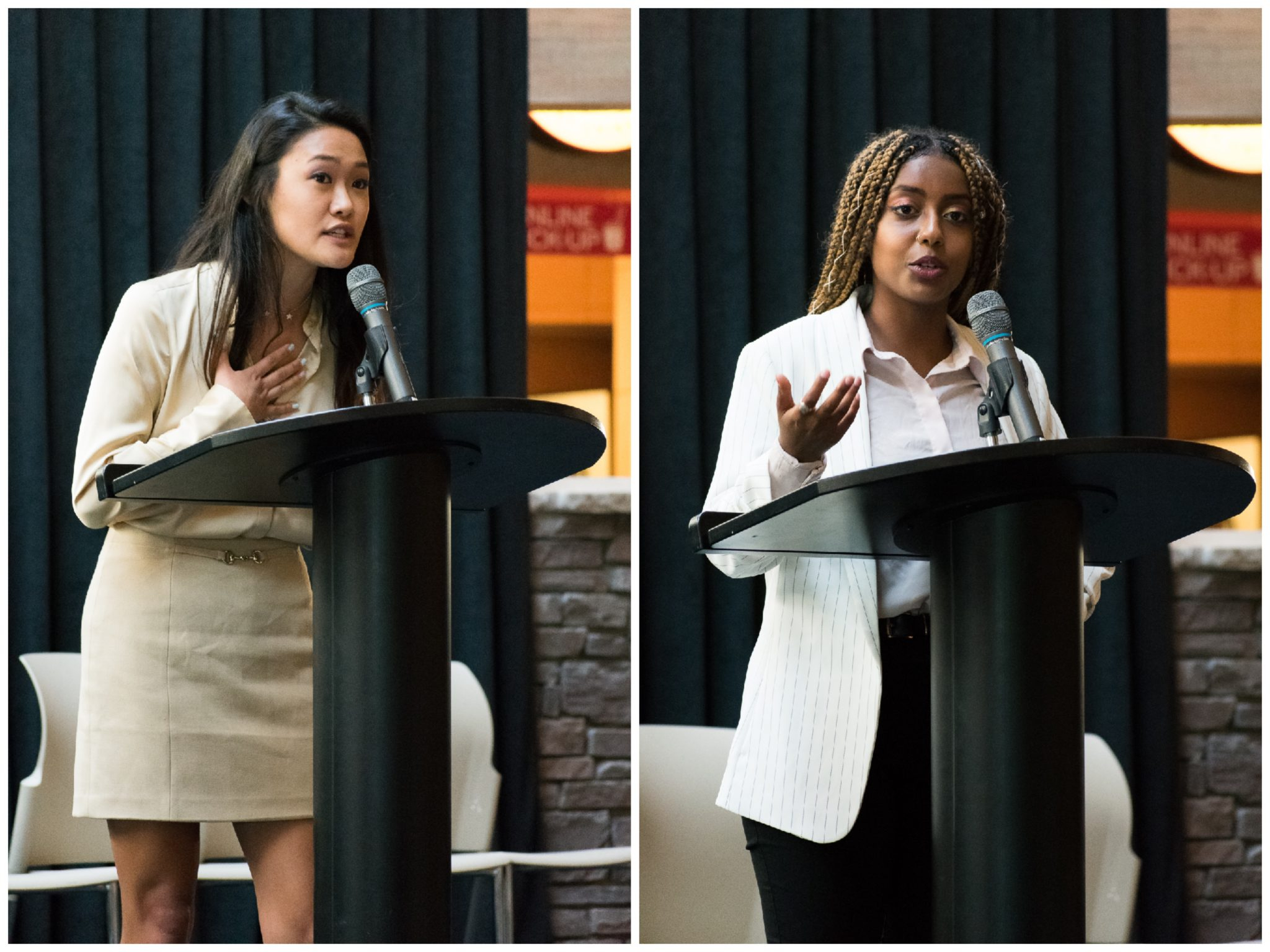 The two candidates spoke to students in the University Center’s Hub in a moderated 40-minute discussion where they answered a variety of questions from the Associated Students (A.S.) Elections Board about how they would lead A.S. in the 2019-20 school year.

Solomon and Sir advocated for many of the same issues, such as furthering transparency and extending outreach of A.S. activities to the student body. Still, they differ on the main projects they wish to create through the year, as well as their prior experience.

Solomon currently serves as an on-campus senator for A.S. as well as Finance and Business Chair. Prior to their election as a senator last year, Solomon worked for A.S. Student Initiated Recruitment and Retention Committee (SIRRC) and was an A.S. Fellow.

Sir emphasized her background outside of A.S. during the debate, such as her work alleviating food insecurity over the past year, her position as vice president of finance for the Panhellenic Council and her experiences as a summer orientation leader and desk attendant. Sir was also an off-campus senator during the 2017-18 school year.

During the forum, Sir noted that taking a break from A.S. involvement benefited her ability to serve the students and understand the failures of A.S.

“I realized that A.S. only benefits people in A.S. and their entities, and it doesn’t really help the average UCSB student at Isla Vista,” Sir said.

“What I want to do is more outreach and really help students who don’t know about the resources A.S. can do to help you be successful on campus.”

Each of the candidates spoke at length during the debate about the main projects they hope to develop if elected as A.S. President.

Solomon discussed three main projects for their term: a career development program through the A.S. website, instituting an A.S. alerts system and creating a financial aid advisory position through the A.S. office.

Solomon cited their past experience developing the Finance and Business website this year as a model of what can be achieved through an online career program. Solomon also emphasized the benefits of creating the financial aid advisory position.

“I think it’s so important to disperse information from a platform that is easily accessible. So I would create a position within A.S. who would know everything about financial aid and be able to talk to students during office hours about information they heard from the Office of Financial Aid,” Solomon said.

Their third goal, creating an A.S. alert system, would be a way to further communication between A.S. and the student body. Solomon described the project as an opt-in system, where students can sign up to receive notifications related to what A.S. is working on and other opportunities like conferences or grants that students can apply for.

Sir also emphasized increased technological use through her plan of a new A.S. app which would give information about events and resources provided by A.S.

“This is really important because I feel like A.S. this year had a really big lack of outreach. A lot of people don’t know about the resources of A.S. and people don’t even know what A.S. is or what Senate is. I think this A.S. app will really provide that and help get people involved and understand the resources they have on this campus,” Sir added.

In addition to the app, Sir hopes to create a meal vending machine for low-income and undocumented students, which would be located near the Pardall Center in Isla Vista. She also wants to allocate funding to give students free access to Headspace, an app focused on improving mental health through guided meditation.

Sir emphasized that the app and vending machine would not add additional student fees and hopes to decrease student fees as A.S. President.

Solomon noted that they would not increase student fees but doesn’t plan to lower student fees, emphasizing the importance of the fees for creating programs that benefit students.

“As the chair of Finance and Business, I was able to see all the programs that were able to be put on by the fact that we do pay student fees. I would like re-allocate and work within how much we do currently have to make sure more of it is going back to students themselves and not university departments, and make sure that the university is held more accountable in paying for things that students need,” Solomon said.

Just because you don’t know how AS serves students doesn’t mean they don’t, it means you’re ignorant.

If you’re going to try and be AS president, you should take a second to learn about some of the great things AS does for the community: planning for new lights in IV, taking students to Sac to get more funding for UC, VOTER REG, dog trainings, the IV Tenants Union, UCIV, the legal resource center. etc. etc. ETC.. These projects bettered our community while Alison Sir took a “gap year.”

Anonymous
Reply to  A concerned gaucho

Anonymous
Reply to  A concerned gaucho

If that’s truly what you gathered from those comments, you must lack basic reading comprehension skills but go off

Does anyone care that Zion literal lied to students about her ability to serve them. Didn’t fund Greek life. And ran out of money so now orgs can’t get funding? Ohh also that she’s complete partisan??

AS is supposed to run out of money?? Like the whole point is that orgs are supposed to come and request money for their events. If there’s left over money then enough outreach wasn’t done?? Also like FB did fund Greek life. It’s all on their website. Also Zion did the most work out of anyone on senate this year. Soooo idk what info you’re getting but it’s wrong. Good try tho.

But they ran out week 3 of spring, not even halfway through which would make way more sense since there’s lots of events still coming up, also pretty much every event in the last two weeks was no where nearly funded, they only got the absolute bare minimum, that’s the difference

Zion’s pronouns are they/them, in case you couldn’t comprehend that from the article..

If you’re going to be AS president you should really learn how to be non partisan. Calling an entire organization “Colonizers United” won’t help to create any cohesive work in AS spaces to actually get things done. It only feeds into the toxic AS culture that so many people are put off by to begging with. Additionally it invalidates every person of color in the organization who identities with direct history to colonization. Who are you to invalidate someone’s history, culture, and identity by using a blanket statement like that. Second, y’all obviously lack reader comprehension because no where in… Read more »

“I realized that A.S. only benefits people in A.S. and their entities, and it doesn’t really help the average UCSB student at Isla Vista,” Sir said.

Greek life is a cancer on our campus