While numerous aspects — including age and a combination of genetic, lifestyle and environmental factors — influence the risk of developing Alzheimer’s disease, only a very small percentage of cases are caused solely by genetic inheritance.

The largest known family in the world with hereditary early-onset Alzheimer’s disease resides in the state of Antioquia, Colombia. The members of this family have been studied extensively for over 25 years, with efforts led by professor and co-director of UCSB’s Neuroscience Research Institute Kenneth Kosik and Professor Francisco Lopera, director of the Neuroscience Group of Antioquia of the University of Antioquia’s School of Medicine.

This population comprises around 6,000 individuals that descended from a couple of Spaniards who settled in the 1600s in a village 100 miles north of Medellín, surrounded by the Andes mountains. Around one third of the family members carry a deleterious genetic mutation and will develop Alzheimer’s disease by age 65.

The Colombian family carries a specific mutation in the gene that encodes Presenilin 1, or PSEN1, one of the three major genes associated with genetic Alzheimer’s disease. In this family the amino acid on the position 280 changed from glutamic acid to alanine (Glu280Ala).

“Presenilin 1 is a part of the gamma secretase complex, which cuts amyloid precursor protein into fragments that your own body is able to get rid of. When you have mutations in this gene, this complex doesn’t work properly, and favors the cleavage of amyloid precursor protein into amyloid beta, which forms aggregates that are called plaques and is one of the classical brain changes seen in Alzheimer’s disease patients,” Juliana Acosta-Uribe, a graduate student researcher in the Kosik group who previously studied at the University of Antioquia’s School of Medicine, said.

Testing for this specific mutation, or variant, in PSEN1 allowed the researchers to find numerous branches of the extended family.

Recently, a second family from the northern part of Antioquia emerged. The researchers initially thought it was part of the larger Colombian family with the Glu280Ala mutation, as this 130-person group exhibited the same autosomal dominant inheritance pattern for Alzheimer’s disease and presented with similar symptoms.

“The only thing that this smaller family may have that’s different [from the larger Glu280Ala family] is slightly later onset of Alzheimer’s. They get dementia in their 50s versus the larger family, which gets it slightly before their 50s,” Acosta-Uribe said.

However, the smaller family tested negative for the precise Glu280Ala PSEN1 mutation. This prompted the researchers to sequence the entire PSEN1 gene in one of the affected patients, revealing a genetic variation in which the amino acid in position 416 that is normally an isoleucine was replaced by a threonine (Ile416Thr).

The lab members performed a segregation analysis to confirm that members of the smaller family who were affected with Alzheimer’s disease carried that variant and that unaffected, older family members were not.

“We concluded that, indeed, this variant was segregating with the illness. If you put the segregation test with the previous knowledge of how mutations in PSEN1 are causative of Alzheimer’s disease, you can conclude that this mutation, or this variant, is pathogenic,” Acosta-Uribe said.

A second Colombian family with a novel mutation on the same gene for inherited Alzheimer’s disease had been discovered.

The remarkable finding is documented in a new paper appearing in the journal Alzheimer’s & Dementia. 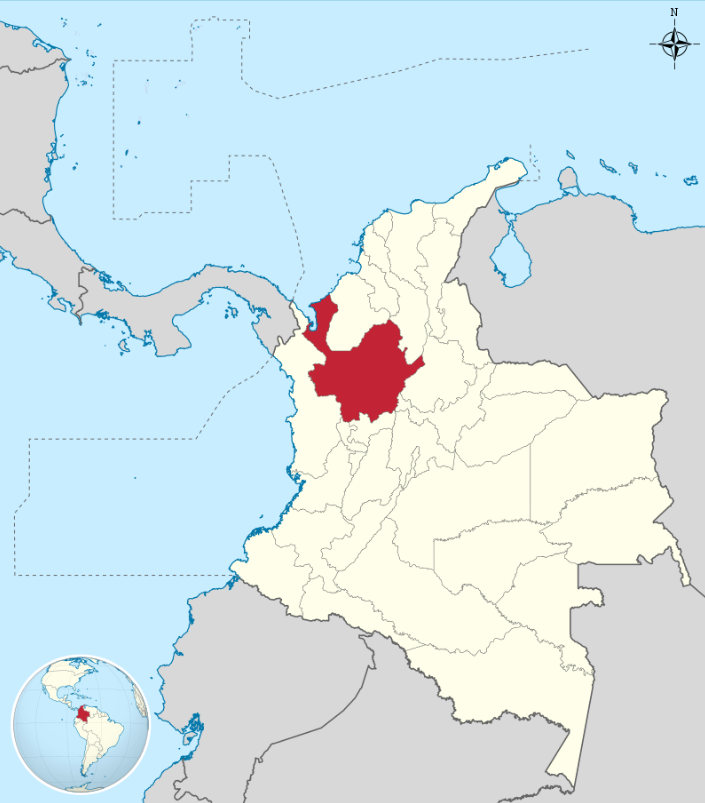 UCSB researchers report a second large family with a genetic variant for Alzheimer’s Disease also living in the state of Antioquia, Colombia. They traced the genetic mutation back to African ancestors. / Courtesy of Wikimedia Commons

While the two families are neighbors today, identity-by-descent analysis revealed that the two families’ genetic variations originated on different continents. The larger family’s PSEN1 Glu280Ala mutation came from a Spanish ancestor, believed to be from when European settlers came to America in the 16th century. The researchers traced the other, smaller family’s genetic mutation back to African ancestors, which correlated with the historic registries of African slaves in the region.

Colombia’s rich history supports this conclusion: Beginning in the early 16th century, Spanish conquistadors arrived in the New World and brought over West Africans as enslaved laborers. Both groups mingled with the native populations, resulting in mixed demographics, which are still reflected in present-day Colombian demographics.

“When you look at the genomes of Latin-American people, you can find genetic signature of different ancestries in different haplotype blocks, which are the segments, or ‘chunks’ of your DNA that you inherited together from your mother or from your father,” Acosta-Uribe explained.

“[For the smaller family], we looked at the ancestry surrounding that part of the mutation. We saw that there were other variants close to our variant of interest that were only reported in African populations … So that is how we concluded that the mutation had to have happened in the context of an African haplotype.”

Working with the larger family for over two decades now, the Kosik lab has done intensive follow-up for Alzheimer’s disease patients through the entire process of growing up, getting early onset Alzheimer’s disease and dying from the disease. The researchers have registered over 1,500 carriers of the mutation so far.

Studying Alzheimer’s disease in these families has helped to improve understanding of the preclinical stages of Alzheimer’s disease, before the patients begin experiencing memory issues. It permits close observation and study of the changes occurring as an affected person’s healthy state transforms to a state of dementia, including how neurons begin to degrade, how amyloid plaques builds up and how the brain responds to this plaque accumulation.

Work with these families also allows for preventative clinical trials and may help to develop preventative drugs.

“In the future, people who know they have relatives affected by this form of genetic Alzheimer’s could get specific testing and genetic counseling to decide if they want to have babies or if they want to do any sort of in vitro method,” Acosta-Uribe stated.