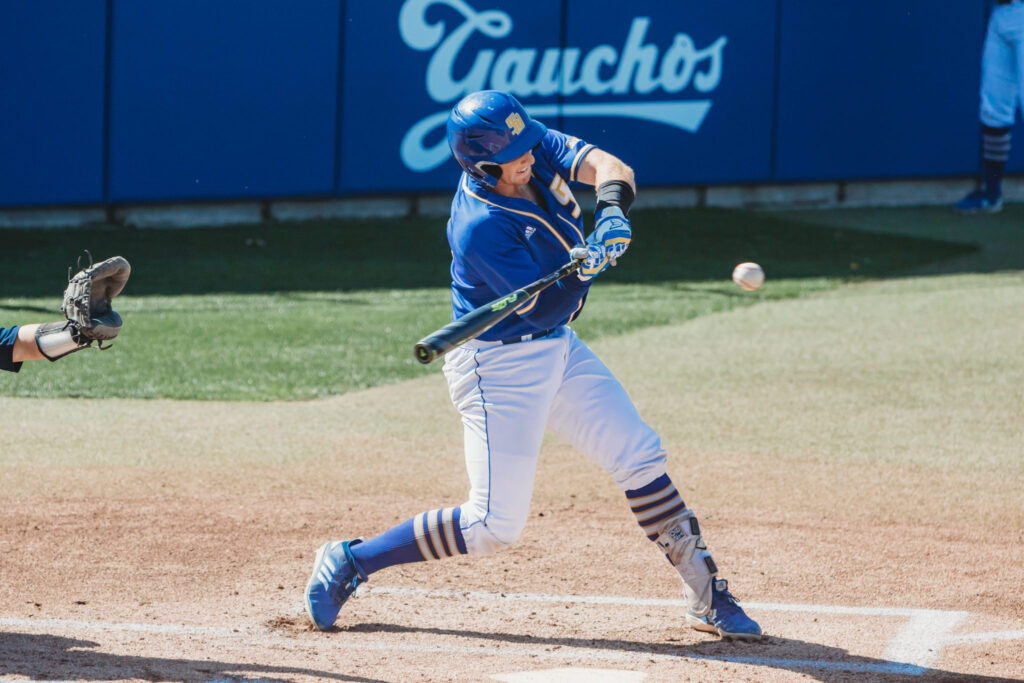 Senior designated hitter/utility Thomas Rowan belted two no-doubt round-trippers on Friday, one in the third and one in the eighth inning, to help lift the No. 14 ranked UCSB baseball team past No. 16 UC Irvine, 4-1.

The win gives Santa Barbara its seventh consecutive and pushes them to 25-5 overall on the year, 3-1 in Big West play. The victory also snapped Irvine’s five-game conference win streak dropping them to 5-2 in the Big West and 21-7 overall.

On the mound, the Gauchos were solid all evening surrendering just four hits to the Anteaters, a team that came in averaging eight hits per game.

Junior left-handed pitcher Ben Brecht (7-0), in particular, turned in another great performance on the bump tossing a season-high 7.2 innings, striking out eight batters, en route to his seventh win of the year.

Still, the game did not start out so strong for the southpaw. Brecht would walk the opening batter of the game then hit the next one giving Irvine runners on first and second.

With runners on the corners and no outs, Brecht responded by getting the next Irvine batter, Adrian Damla, to hit into a double play, then struck out Mike Peadbody to end the first allowing just one run despite the shaky start.

With two outs in the first, junior center fielder Tommy Jew kept the bottom half of the first frame alive by rocketing a ball to right field to leg out his fifth triple of the year. He would come around to score following an RBI single from Rowan tying the match at 1-1.

After that Lewis RBI single, Brecht really settled in retiring the next 11 batters not allowing another hit until the fifth inning. By then, UCSB held a 2-1 advantage thanks to a home run to left center from Rowan in the third inning, the only hit of that inning.

Even with allowing a hit in the fifth plus a walk, Brecht kept working his way out of every jam. In the top of the eighth, up 2-1, with two outs, UCSB’s defense faltered. It faltered in a way very reminiscent to the Gauchos losses at St. Mary’s and Cal State Fullerton.

First, sophomore third baseman Jason Willow could not field a ball hit down the line to him, then junior short stop McClain O’Connor misplayed a ball. This set up Irvine with the tying run on second and the go-ahead on first.

Following the two errors, Brecht would be relieved by freshman Michael McGreevy. Brecht finished the day allowing just three hits and walked two batters. His eight strikeouts give him 69 on the year, pushing him back in front of having the league’s most K’s.

McGreevy inherited the two runners, and did not let them go anywhere forcing a ground out, ending the top half of the frame.

Up 2-1, UCSB needed a few more insurance runs just to keep themselves in a favorable position heading into the ninth. The Gauchos got those runs thanks to a solo home run from Rowan to kick off the inning.

After the round tripper, junior outfielder Armani Smith ripped a ball to left center to leg out his team-high sixth triple of the year. A double from Andrew Martinez would bring home Smith and give UCSB a 4-1 lead.

In the ninth, McGreevy gave up one hit, but nothing else en route to his fifth save of the year and securing Santa Barbara’s game one, 4-1 win.

All-in-all, UCSB played a good game, delivering nine hits on the day and handing junior Andre Pallante his third loss of the year.

Today’s win also marks another positive for UCSB: it continues to highlight that this team is for real. Though a better way to do that would be to seal up a series victory.

Santa Barbara will face UC Irvine in game two of the series beginning at 2 p.m. on Saturday, April 13 at Caesar Uyesaka Stadium.