The UCSB baseball team has arguably been the most dominant team in the Big West to this point. With a 24-5 overall mark to this point and the No. 6 highest rating percentage index (RPI, a quantity used to rank sports teams based upon a team’s wins and losses and its strength of schedule) in the country, Santa Barbara has set itself up for its best season since its College World Series run in 2016.

It also helps that UCSB proved itself a little bit in its opening Big West series, taking two of three at Fullerton to be second in the conference standings with a 2-1 mark.

However, there are still people that doubt the Gauchos and roll with the team that is cruising into town this weekend, UC Irvine. And it makes sense because if UCSB is the most dominant team to this point, UCI is not far behind. 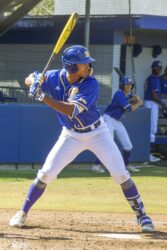 The Anteaters currently boast a 21-6 overall record and have had a great 5-1 start to conference play after taking two of three at Hawai‘i and sweeping through Long Beach State. In fact, after starting the year 8-4, Irvine has won 13 of its last 15 ball games with its last loss coming to No. 1 UCLA, 9-3.

UC Irvine also has one of the most impressive players in the conference, junior third baseman Brandon Lewis. Lewis is leading the Anteaters and Big West in many major offensive categories with his 11 home runs, 37 RBIs, 13 doubles and a slugging percentage of .773. That slugging percentage is also 11th in the entire NCAA.

Just recently, the Porter Ranch, Calif. native was named to the USA Baseball Golden Spikes Award Midseason Watch List, a prestigious award given to the top amateur baseball player in the country. Lewis is the lone Big West member on the 40-player list.

One of his teammates that was considered, however, was junior right-handed pitcher Andre Pallante. The San Clemente, Calif. native is having an outstanding year currently sporting a 2.83 ERA with 44 punchouts.

Pallante is slated as the starter for Friday’s game as he has been all year, but it would be fair to say he has not faced a lineup quite like UCSB’s.

The Gauchos have some of the top hitters in the league with junior catcher Eric Yang being only one of two players to have above a .400 batting average and players like Armani Smith and Tommy Jew, each having eight home runs apiece, tied for second most in the conference.

UCSB is also fast on the base paths as Tevin Mitchell and Jew are first and second in the Big West with 15 and 14 stolen bases this season, respectively.

Santa Barbara also has some tough cats on the mound. Friday starter Ben Brecht has been great this season with a 3.00 ERA and 61 strikeouts, the second most in the conference.

Even better, Brecht has accumulated a 6-0 record in his eight starts, proving he has done a good job of giving his relievers some room to breathe. Brecht averages about six innings per start, but in his last start, the southpaw tossed 7.1 innings.

Sophomore Jack Dashwood has also been a good weekend start for the Gauchos as he sports a 2.27 ERA in 39.2 innings of work. That ERA ranks in the top five of the conference.

Junior righty Chris Lincoln is the first man out of the pen for the Gauchos in usual tough spots and he has been good this season. Despite his 4.29 ERA not being the most impressive, Lincoln has usually delivered for UCSB as proven by his seven saves this season.

Overall, this series will be a great one. By no means does it determine a conference winner, but conference victories are always a hot commodity. And with the race for the Big West just starting out, no team can afford to lose ground.

UCSB will host UC Irvine for game one of the three-game series at 3 p.m. on Friday, April 12 at Caesar Uyesaka Stadium. Game two will commence at 2 p.m. on Saturday while game three will start at 1 p.m. on Sunday at the same location.

A version of this article appeared in the April 11, 2019 print edition of the Daily Nexus.