The Daily Nexus
Sign of the Times
Letter from the Editor | A Call for Civility During Divestment
April 10, 2019 at 8:00 am by Hannah Jackson and Harper Lambert

It’s spring quarter, and you know what that means! No, not Deltopia — the other “D.” It’s Divestment Season.

If you are not familiar with the history of the Boycott, Divest and Sanctions (BDS) movement, here’s a quick recap: Since 2001, student governments of the University of California have attempted to pass legislation imploring the University of California to divest from companies “that provide military support to the occupation of Palestinian territories.” These include General Electric, Boeing, Lockheed Martin, United Technologies Corporation and Valero Energy Corporation, among others. According to the 2019 UCSB A.S. proposed divestment resolution, the UC Regents invested a total of $127 million in these companies during the 2018 fiscal year.

The stated goal of these proposals is to cease the provision of monetary aid to corporations that allegedly participate in or profit from human rights abuses in occupied Palestinian territories.

UC Santa Barbara is the only undergraduate campus in the UC system that has not ratified a divestment resolution, the most recent one having been enacted by UCLA in 2014. Although all eight UCs voted in favor of divestment, none have actually divested funds. In other words, the passage of the resolution merely signifies the student body’s stance on divestment —  but, in reality, only the UC Regents have the authority to enforce it.

This will mark the sixth time in seven years that the UCSB Associated Students senate will put the resolution to a vote. In years past, this has become an increasingly contentious issue, sparking campus-wide debate. Like clockwork, the resolution reappears each spring, in conjunction with the emergence of short-shorts and the mustard plant bloom. 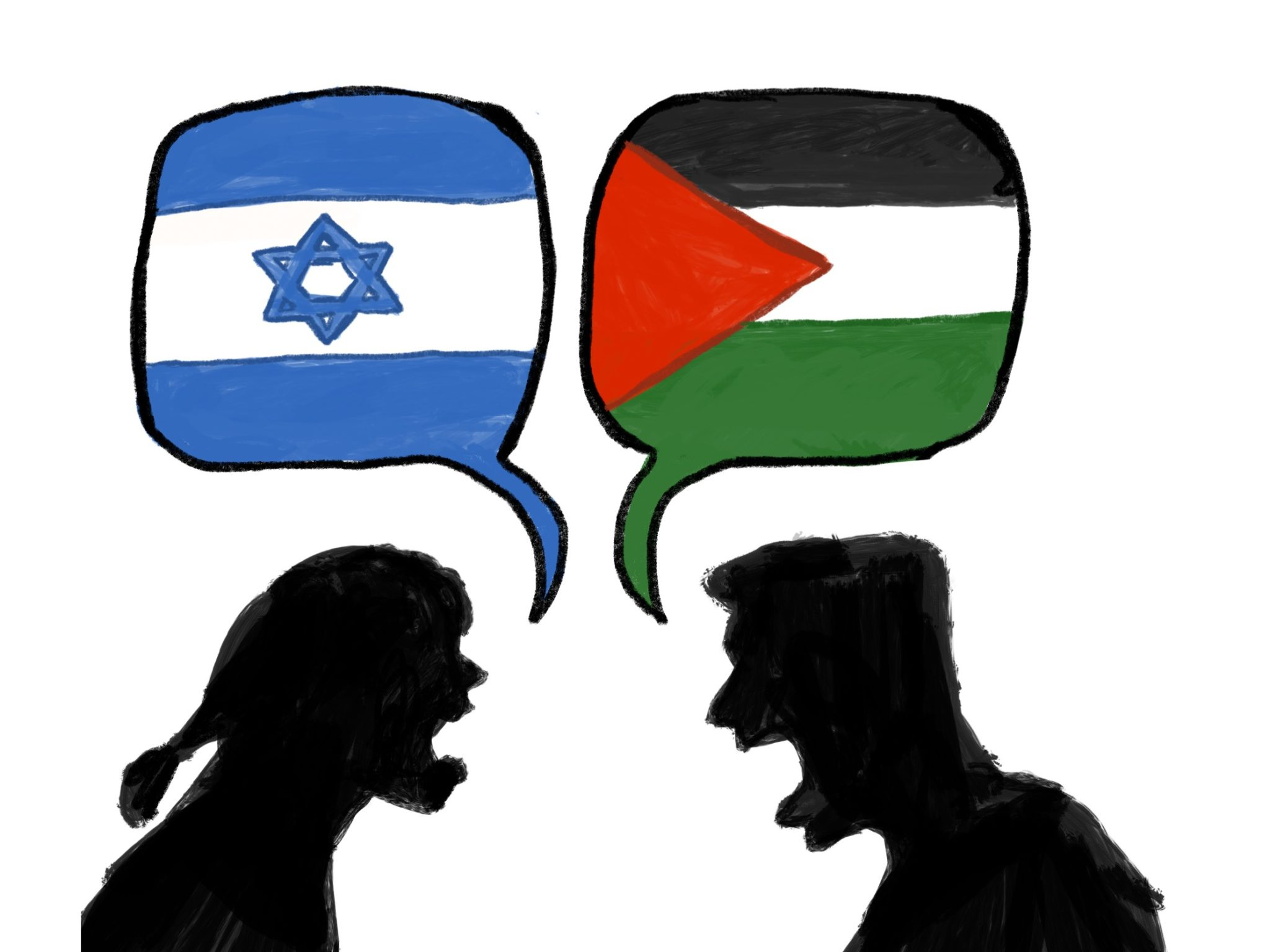 Yet the infamous meeting has far greater implications than the trials and tribulations of student government. It is a time of heightened discomfort and confusion for Jewish students whose views do not align with Zionist-leaning campus organizations and/or the BDS movement.

Dissenting opinions allow us to foster open conversation and see things from different angles. However, when the annual issue of divestment arises, there is a noticeable increase in microaggressions, expressions of hate speech and anti-Semitic sentiments.

As an ethnicity, culture and religion, Judaism is incredibly nuanced, encompassing a wide range of spiritual and political affiliations. Many students who identify as such do not feel represented by the few Jewish student organizations on campus and thus lack community support during times of peak anti-Semitism.

We are not here to tell you what stance to take on the Israeli-Palestinian conflict. But, considering the recent spike in anti-Semitism on a global, domestic and local scale, it is imperative to remember that supporting the BDS movement does not excuse hate speech in any form.

Anti-Semitism is on the rise in the United States and across college campuses. Swastikas have been popping up at some of the country’s most prestigious universities. Hate speech has been scrawled across the offices of Jewish professors. Even in our own backyard, a flyer peppered the mailboxes of Del Playa homes, espousing horrific words of anti-Semitism.

One of the most valuable aspects of coming to university is gaining access to perspectives that are different from one’s own. Dissenting opinions allow us to foster open conversation and see things from different angles. However, when the annual issue of divestment arises, there is a noticeable increase in microaggressions, expressions of hate speech and anti-Semitic sentiments.

A few general suggestions for this divestment season: Do not employ harmful stereotypes. Do not ask people if they’re Jewish “because they have the schnoz.” Do not imply that Jewish students do not rightfully earn their spots in universities and that they paid their way in or played the minority card. Do not assume that Jewish-Americans support the Trump administration just because it is pro-Israel. And do not ask your Jewish friends to speak on behalf of the Jewish community at large regarding the complicated and convoluted mess that is the Israeli-Palestinian conflict.

Just because we’re Jewish doesn’t mean we have the answer. If we did, we would have dropped out of school and received our Nobel Peace Prizes ages ago.

As we are all aware, the internet is a petri dish for hate speech directed toward marginalized communities. As opinion editors at a campus newspaper, we are privy to the bigotry of those emboldened by anonymity to send hateful messages from the safety of their mothers’ basements. Nowhere is this more apparent than in the comment sections of articles about the conflict and B.D.S. The horrific hate speech festering in the comment section of this very website targets both Arab and Jewish groups:

“Brush up on your Arabic and go to the land of the Palestinians. Kids are taught to remove all Jews from the earth.”

“Removing Jews from the world is taught to all Palestinian children. A hateful group.”

“The issue of jewish over representation [sic] at universities (UCSB included) needs to be addressed.”

We also cannot ignore the hate speech directed toward Palestinian and Arab students — as well as their allies — who are routinely threatened and insulted for exercising their right to free speech. Because while the vote to divest is currently symbolic within the UC system, the dangers faced by students, professors and dissenters alike are disturbingly real.

So when BDS comes up in conversation, as it inevitably will this week, think carefully about the language you use regarding Jews and Palestinians.

The organization Canary Mission collects and broadcasts the information of anti-Israel individuals on North American college campuses. Students involved in Students for Justice in Palestine (SJP) and/or pro-Palestinian political activism are deemed “terrorists” and subjected to a total breach of privacy. Information posted on the website includes, but is not limited to photographs, voting records, links to social media and academic history. An overwhelming majority of the individuals profiled are of Arab descent — an unequivocal mark of racism.

These are not the Jewish values of tolerance and acceptance that we grew up learning. Know that they do not speak for us, or for most members of the Jewish community who advocate for peaceful coexistence and human rights. We are disgusted by the racial profiling so overtly practiced by this group, and any other self-proclaimed Jew should agree.

So when BDS comes up in conversation, as it inevitably will this week, think carefully about the language you use regarding Jews and Palestinians. No matter where you stand on the Israeli-Palestinian conflict, don’t allow hate speech to taint your opinions.

Harper Lambert and Hannah Jackson are two Jewish women who do not condone hate speech of any kind.

please stop shedding any light on canary mission. no one on this campus supports their mission, and they misrepresent the majority of pro-israel students on this campus who wish for peaceful dialogue, not intimidation and fear-mongering. by publicizing their work, you are only furthering their platform and allowing them for more exposure— advancing their twisted goals. their effect has been proven tiny, but will only widen the more spotlight they receive.

My overly religious born-again Christian cousin was blown up in a cafe in Israel, some years ago. The Palestinian who did it was just following what he was taught in school, to kill all Jews. So, yeah, I may be a bit biased.

A good article, good to generalize to: no hate speech about anyone. There are crazies in every belief group… Timothy McVie in the US, a Christian crazy who blew up the federal building in Oklahoma City… crazies on both sides of the Northern Ireland issue… genetically identical but sundered into Protestant/British and Catholic/Irish… crazies who slaughtered the Twa and the Tutsi in Rwanda… crazies in Cambodia in the 1970’s who slaughtered artists and people who were just too old. Enough. If you feel the need to slam someone because they are in a group that had a crazy in it,… Read more »

Why does the nexus censor comments?

Calling what Israel does apartheid is not hate speech. It is fact.

Why did this author feel like they needed to bring up trump?

This article is uninformed and poorly written. As always, the Nexus fails at even decent reporting. Better luck next time?

As someone who’s written of the Nexus’ reporting, why even bother reading/commenting? Seems like a waste of your time, asshole..

“An overwhelming majority of the individuals profiled are of Arab descent — an unequivocal mark of racism.” Not really. The BDS movement catalogs and enumerates academics, activists, normal business-folk, organizations, etc…many of which are Jewish, and that doesn’t seem to outrage anyone. It isn’t anyone’s fault that the Arab world is quite antisemitic and unfortunately many immigrants coming to the US import the hateful propaganda they were raised in. Now we’re all supposed to be tolerant of this intolerance and just accept it uncritically. Fuck that man. I’m sick and tired of walking to class and dealing with this assholes… Read more »