The Daily Nexus
Opinion
The College Status-Quo: Is It Always the Right Choice?
March 21, 2019 at 7:37 am by Sophia Rollins

University. When I think back to the first time I ever heard that word, I was very young, maybe around six years old. Perhaps I was even still naive enough to tell myself I was going to audition for the Disney Channel and get my big break. My mother was finishing her Master’s program as I was just beginning to learn how to read, so the importance of college constantly loomed above me, serving as a road map for my future. Never realizing how apparent the role of education in my life was in all 18 years of my life, I applied to a four-year university without hesitation, as most of my peers and friends did during the fall of last year. I have only recently began to consider why. 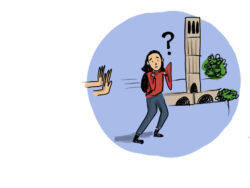 College, or education at all, is never a given, so why did I treat it as one? “It was mostly something that I had to do,” first-year political science major Alexandra Perez said. It can be especially hard to differentiate between wanting to attend a university and wanting to be a successful part of society. For the majority of students, the two are permanently linked, meaning in order to be successful and functional in today’s age, we need a degree or two under our belt. When I was handed my diploma, I remember distinctly that my grandparents hugged me with proud tears accumulating in their eyes. Yes, college was a “bigger deal” so to speak around 50 year ago, but I was surprised, as graduating high school always seemed like the beginning of the trail head, not the peak of the hike.

This mindset, I’ve determined, is partially due to the fact that I am my mother’s daughter, but more crucially because I am educationally privileged and have been all my life. This entitlement drives me to assume that college is everyone’s next step, when in fact, college attendance rates have been decreasing since 2011. Many students from my high school chose to take a gap year to experience the world, or work for a few years before paying a university’s tuition. Jumping directly into college may seem like the most time-costly option, but it definitely isn’t the norm.

To many students, like myself, the word “college” seems more like a direction than an option. Even without parental and societal pressures, many students such as myself choose to attend a four-year university because we assume it’s the only way to make something large of ourselves. Perez had a similar parent relationship, claiming, “Not that my parents forced me to apply. They would support me in anything I did. It’s more of just a societal thing.”

My privilege that has brought me to a four-year university often makes me lose motivation. Because I’ve been awaiting college my whole life, it can be difficult to find a very clear and unique justification for attending. What am I, myself, working toward?

To many students, like myself, the word “college” seems more like a direction than an option. Even without parental and societal pressures, many students such as myself choose to attend a four-year university because we assume it’s the only way to make something large of ourselves.

For privileged students, college is the next step, no second thought needed. I wondered if this could result in an identity crisis upon arrival, as these students may not know what they’re working toward either. Does this imply that students that haven’t always seen a university in their near future find more driving ambition? Damian Zermeño, a first-year first generation student elaborated on his reasoning for wanting to attend UCSB: “ I wanted to get my mother, my sisters and I out of that poor lifestyle. The main reason for me was not to escape poverty but to get out of the hole, and I think college is one of the only opportunities.” The hole, in Zermeño’s words, derives from tradition, and is a common fear for many first generation students. Zermeño told me this is a vicious cycle, and the last thing his parents expected from him was to jump straight into a four-year university out of high school. “My mom had doubts about me. She didn’t think I would finish high school because I was that kid, surprisingly. When I decided to come here she was surprised. Being a first gen, I constantly have to make it up as I go, but I did it for myself,” he said.

As I started asking the people around me for justification of their college verdict, I dug into what has largely impacted my own. The history of my college choices and my privilege boils down to one aspect of my young adult life. So, I asked the woman herself, my mother, for her reasoning for choosing the university route. My mother didn’t have the typical college encounter we all expect to have. She transferred schools, dropped out and had two kids all before finding her way to her “X marks the spot” or her master’s degree in Public Health. “I wanted to learn and expand my mind, find my calling and then have the power of a degree behind me. I was curious enough to be open, but knew my strengths and my interests,” she said.

My eyes are constantly opened with differing perspectives since moving to California for college. Although I have an idea of what I want to pursue, I find myself questioning, why college now? Or, why did making this decision feel so instinctual to me? If you ever find yourself losing your way, just remember that everyone has a different motive fueling their experience, and discovering reasoning for college, I find, may inspire you. My mother reminded me at the end of our conversation of a prophecy about where keeping an open mind will lead you. I like to keep it in mind often. As RuPaul says: “Be open to the stage direction of life. It will guide you to what you were meant to do.”

Sophia Rollins is still finding her reason for college attendance, and in the meantime, is curious about everyone else’s.

Sophia Rollins
Sophia Rollins is an Opinion staff writer from rainy Seattle, Washington. When not complaining about the general chemistry series, she enjoys retail therapy and a good book.