The Daily Nexus
Music
Your New Best “Twen”: Noontime Jamming Beneath Storke
March 13, 2019 at 11:28 am by Hannah George

It seems that Santa Barbara finally got its first taste of spring this past Thursday, and what better way to celebrate a sliver of sunshine with a jam session beneath Storke Tower? Boston’s underground indie-pop group “Twen” added a lucky stop to their tour right here at UCSB’s campus. Following A.S. Program Board’s semi-weekly Noon Storke Shows, the alternative bunch invaded the courtyard, rocking raw, melodious beats and enticing a crowd whose energy swept through campus.

With humble beginnings on the East Coast, Twen released their first album, Twen Live, in March 2017, which is comprised of five vintage-feeling tracks. The band consists of lead singers Jane Fitzsimmons and Ian Jones, along with Cory Best on bass and Jeff Crenshaw on drums. Performing at South by Southwest this coming week, the band is definitely on the rise out of their Boston basement.

In the quaint stage nestled between Storke Tower and its steps, Twen assembled their garage band setup. A few cymbal clanks and a strum of a guitar enticed a small crowd that swarmed a table filled with KIND Bars and Yerba Mates. But the free, health-conscious snacks weren’t the only reason for their arrival; loud and proud, the band launched into a groovy song that had everyone’s heads swaying. 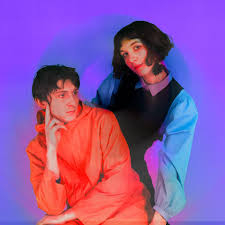 Fitzsimmons and Jones were sure to bring the ’80s feel to their wardrobe, too, with mom jeans and bottlecap shades that fit their music to a tee. The third performance in the set, “Damsel,” which is about “figuring things out,” was a total crowd pleaser, roping in more wanderers to the Storke steps. As they reached the last guitar strum, Jones apologized for the exhaustion as they had just driven up from San Diego earlier that morning. They made quite the trek — from Boston to San Diego to Santa Barbara — for us Gauchos. This fatigue was hardly noticed as they continued on with their energetic set.

Did I mention the crowd yet? It was almost unbelievable: The age groups spanned from professors to an actual toddler, and everyone absolutely loved it. One woman’s baby in a stroller was actually fist pumping throughout the set.

A few music-admiring Gauchos gave their input on the show.

“I hadn’t heard of them before, but I’ll check them out after. They really brought a unique sound to Santa Barbara” said Hannah Ford-Monroe, a second-year film and art double major.

In the past, the concerts around town brought mostly “surf rock, so this was a nice change of pace,” she continued.

As the supply of Yerba Mattes depleted, the show continued with the same intensity as its start. Besides a brief moment for the band to discuss the “polar vortex” SoCal has been in and the lengthiness of their tour, Twen only had high spirits that echoed throughout the crowd. Jones was sure to remind us that our “glory days in college are numbered,” so we might as well enjoy every moment. And many did that day as they embraced Twen’s music in all its live, sun-filled glory.

While the euphoric set was limited to one midday hour, modern technology allows us to jam to Twen at all times. Available on Apple Music and Spotify, as well as their own website, you can listen in the morning and the evening, too.