The Daily Nexus
Opinion
The Best Education That Money Can Buy Isn’t Really the Best
March 13, 2019 at 10:52 pm by Katherine Swartz

On Tuesday, March 12, I watched the thinly veiled facade of the college admissions process come tumbling down as federal prosecutors charged 50 people with various crimes of buying students spots in top schools across the country.

At the center of the scandal is William Singer, who pleaded guilty to racketeering conspiracy, money laundering, tax conspiracy and obstruction of justice. As the head of Edge College & Career Network, also known as the Key, Singer charged the uber-wealthy anywhere from $200,000 to $6.5 million to get their children into universities where they were not qualified for acceptance.

Singer enabled cheating on the ACT and SAT through the use of personal proctors. He also manipulated students’ applications to give the appearance of extraordinary athleticism worthy of top college recruitment.

I can’t give all the credit to Singer. This ruse couldn’t have been possible without the bribery of college sports coaches and recruiters from Georgetown, Stanford, University of San Diego, USC, UT Austin, Wake Forest, Yale and the University of California’s very own UCLA. At least one coach from each of these schools was indicted for accepting bribes from Singer to reserve a spot for Singer’s clients’ children on a sports team that they did not play for. 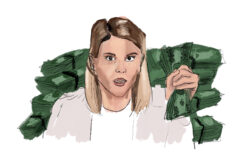 This is the largest college admissions scandal the Department of Justice has ever processed.

“We’re not talking about donating a building so that a school is more likely to take your son or daughter, we’re talking about deception and fraud,” Andrew Lelling, the United States attorney for the district of Massachusetts, said at a news conference on the 12th.

For Lelling, there’s a fundamental difference between a generous donation to a university to get your child a spot and this latest college admissions scandal.

There is a thin and blurry line that separates the illegal from legal, and what binds them together is privilege. Beyond hefty donations, wealth becomes more subtly embedded in the process through costly private school tuition, tutoring and test preparation classes, campus visits and coaches who help write personal essays, all of which help applicants increase their odds of admission.

You’d think most students shouldn’t have to worry about college selectivity, since only four percent of undergraduates attend school with acceptance rates lower than 25 percent, but the rapid rise of exclusivity affects students at all college levels.

The UC system, while more equitable than many private colleges, is still broken by selective admissions. As top colleges become harder to get into and top students are rejected, more apply to universities ranked lower on the scale. Students who have qualified for these schools a few years ago are now rejected and forced into a lower tier, which drives students to even lower schools, and so on and so forth.

Before this scandal becomes news of the past, I think it’s important to stop and ask a simple question: Why?

Why did wealthy parents spend hundreds of thousands, even millions of dollars, facing criminal charges and jeopardizing their careers, all for acceptance to a certain school? Why as a society do we value prestige in college choice to the extent that people are willing to commit crimes to get ahead?

What Singer’s clients failed to recognize is that an Ivy League education is not the key to success.

The Gallup-Purdue Index report of 2014 conducted a study of more than 30,000 college graduates across the U.S. In the executive summary of their study, they concluded that “where graduates went to college — public or private, small or large, very selective or not selective — hardly matters at all to their current well-being and their work lives in comparison to their experiences in college.”

It is not where you went to college but, rather, what you did there that makes a difference in overall well-being and future success. But if you had asked me about this a year ago, I would have openly dismissed this reasoning.

Yes, you read that number right.

For the record, I do not recommend my strategy. I’m a low-income student and qualified for application fee waivers, so I applied to selective private schools I knew I wouldn’t get into, because I had nothing to lose economically in the process.

I was afraid of rejection. I had stellar grades and test scores, a wide range of extracurriculars and awards, yet I knew that wasn’t enough to gain admission to what I considered a “top” university.

To me it came down to status — just as I think it does for those parents who knowingly broke the law to get their children a spot. I know I’m not alone in this thinking either.

Social media fueled my flawed logic of needing to “win” a spot at a top university. While waiting for acceptance letters, I became so excited at the thought of posting a photo to Instagram announcing my future school and getting to add it to my bio.

Yet every time I saw another student make that similar post, I got upset. Why hadn’t I been accepted, while they had? When would I get that shining moment to be recognized?

But it was more than social media that fed the fallacy of status in school selection.

My sophomore year history teacher told my class in the first week of school that we as students were in “competition” with one another for spots at selective universities.

I had to prove to other students who had looked down on me in school that I could be better than what they thought of me. It wasn’t enough for me to succeed, I had to “beat” them by winning a coveted spot at a school while they were rejected. In the end, many of those students got accepted to schools I dreamed of attending.

I had to prove to other students who had looked down on me in school that I could be better than what they thought of me. It wasn’t enough for me to succeed, I had to “beat” them by winning a coveted spot at a school while they were rejected.

I write this not because I feel sorry for myself. I am not complaining I didn’t get into a “better” school, because that logic is flawed in its entirety.

I used to feel so small, so ordinary at my high school, and if I had attended a selective private school or even UCLA or Berkeley, I would have felt the same.

UCSB has allowed me to expand my interests while still pursuing a competitive academic path. I am now in an environment of students who support each other’s successes, rather than engage in constant competition to be the best.

What makes a school “better” than another is not an acceptance rate or a ranking.

Success of a student is not determined by the selectivity of the university they attend, but what students achieve while there. I think it’s better to stand out at a less selective university than to struggle at a highly exclusive one.

There is so much I wish I could tell myself a year ago. I wish I could have prepared for the feelings of isolation and loneliness I experienced after all of those rejections. This is something that’s not discussed often in the national conversation of college admissions — yet it defined how I felt about myself for so long. Those rejections changed me as a person, but I wouldn’t go back and change a thing, because they led me to UCSB, a school I didn’t imagine attending but now cannot imagine my life without.

I allowed myself to get swallowed into the lie that more selective meant more successful. But this week and this latest admissions scandal showed me more than ever how random and biased the college admissions process really is.

Good piece – there are plenty of successful people in the business world who went to JC’s then Cal State schools. The president of my company is a multi-millionaire and went to Cal State Fullerton.

Great article. I also think the issue of jewish over representation at universities (UCSB included) needs to be addressed. Only 2% of the US is jewish, yet 13% of UCSB students are jewish. That means they are over represented by 650% !!

What needs to be addressed is how egregiously misinformed and problematic your comment is :)))) Approximately 76% of UC students are from California, and California’s Jewish population is larger than the entire Jewish population of Jerusalem. Therefore, “overrepresentation” = not a thing (p.s. Affirmative Action on religious grounds has NEVER existed). Secondly, according to a Pew research poll, 94% of American Jews identify as white, so if anything, there’s an issue with the overrepresentation of white students and underrepresentation of minority students. Thirdly, your comment has serious anti-Semitic implications especially considering the context of this article. If “Jewish overrepresentation” is… Read more »

” issue of jewish over representation at universities (UCSB included) needs to be addressed. Only 2% of the US is jewish, yet 13% of UCSB students are jewish. That means they are over represented by 650% !!” I give up. What is the issue? That the Jews over-value education and perform better on the criteria for selection at UC? That the 650% (now that is a truly meaningful stat, NOT) are somehow scamming the admissions system via their endless access to cash (they do, after all, own Hollywood, the Banks and quite possibly the world). That we need to weed… Read more »

On a side note, I cant help but notice how similar your arguments are to that of white nationalists and neo-nazis alike. When confronted with a glaring social injustice that favors a specific ethnic group you respond by saying “Who cares. Jews are richer, smarter and better educated”

First, thanks for sidestepping the substantive issues raised (re-read [or have an educated friend help] the intial question.

Second, your initial proposition (?: more like stream of consciousness let lose by finger movements) )is incoherent (a non sequitur, perhaps?).

Your second claim is in violation of blatant irony.

Is thinking your second language? That would explain a lot.

Please tell me you are not now or ever a student at UCSB. If so, how seriously we have failed our mission.