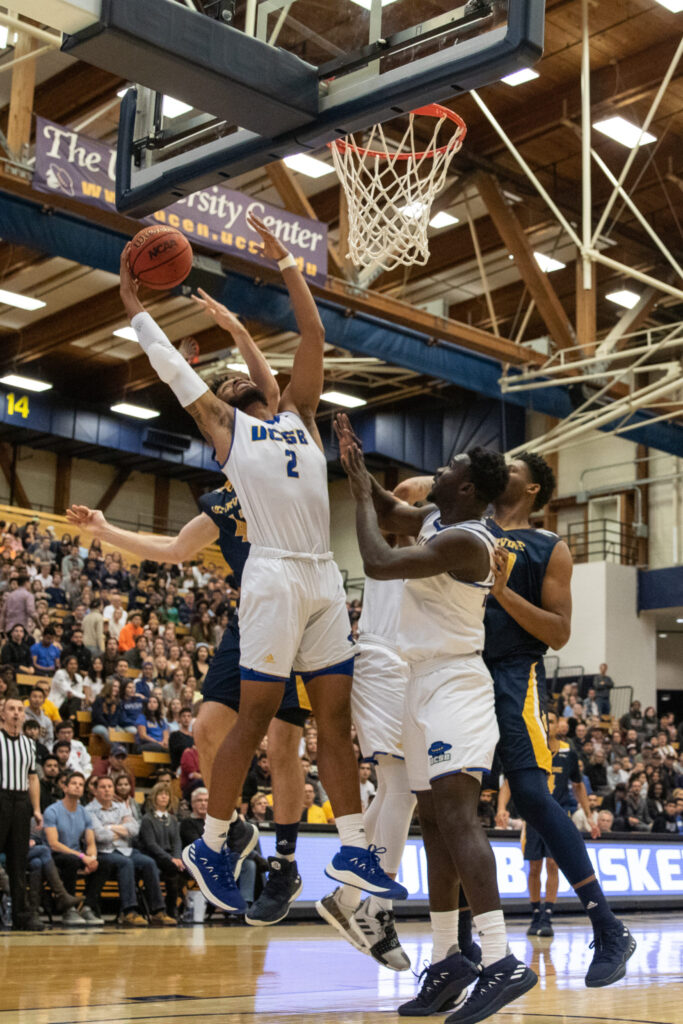 The men’s basketball postseason is now in full effect, as UCSB clinches a second seed bracket in this year’s Big West Tournament. The team will travel to the Honda Center in Anaheim, Calif., where they will look to take on the CSUN Matadors, whom they visited only seven days before.

The Gauchos will be entering the postseason in fine form considering last week’s results away from home.

For the team’s final two matchups of the regular season, UCSB traveled to Northridge and Cal Poly last week for a pair of away games. In turn, the on-fire Gauchos posted back-to-back road wins, during which a clutch three-pointer bested the Matadors by a score of 76-74 and another triumphant Blue-Green rivalry performance featured the good guys defeating the Mustangs by a 92-82 result.

Following these results, and the previous conference home win that occurred in early February, UCSB has successfully done the double over CSUN. Although the Matadors finished as the Big West’s seventh seed, they have managed close affairs each time they’ve shared a court with UCSB. Regardless, the Gauchos will look to carry their current momentum en route to a desired hat trick of victories.

As it stands, the Gauchos can conclude that their regular season was, for the most part, a success. UCSB currently boasts an overall record of 21-9, an exact win percentage of .700. In terms of conference play, the Gauchos’ 10-6 record proved challenging yet equally rewarding, as the team managed a favorable second seed finish in the conference.

As for Thursday’s opponent, CSUN can’t boast similarly favorable results, in regard to its regular season campaign. The Matadors finished with an overall record of 13-19, equaling a win percentage of .406, and a conference record of 7-9 that seeds them as seventh in the Big West.

Entering this postseason matchup, the Matadors will have to dig deep, especially since they’ll be coming off of last week’s back-to-back losses against UCSB and first-seed UC Irvine. Their recent results, however, reflect their dip in form since February, in which they’ve managed only four wins in their last 10 games.

Historically, the Gauchos lead the all-time series against the Matadors by a record of 39-19. This will be the 59th time that UCSB has ever played CSUN, and there will be no love lost between the two sides since the Gauchos also managed a clean sweep over the Matadors in last season’s campaign.

Players to watch, for the Gauchos, include junior guard Max Heidegger and freshman forward Amadou Sow. Heidegger seemingly loves to play in these matchups considering he’s averaged a whopping 24.5 points and six rebounds when playing against CSUN. Meanwhile, Sow will want to capitalize on his spectacular rookie season by continuing to put on a great show through the postseason. Against CSUN, Sow has twice managed double-digit performances, showing his versatility as a player who can both protect the rim and score at will.

“Whenever you lose an all-league first-teamer, it was very difficult to figure out where we were going to score from,” UCSB Head Coach Joe Pasternack responded when asked about the impact of Heidegger’s injury-related absence during the earlier parts of the season. “Sow is as consistent of a freshman that I’ve ever coached,” Pasternack added, “[he] honors the process every day.”

On the Matadors’ end, only one player managed better scoring numbers than Heidegger through these two bouts: freshman forward Lamine Diane. Averaging a game-leading 31 points against the Gauchos, Diane also tallied 13 rebounds last time out. CSUN’s sophomore guard Terrell Gomez also appears to be at the helm of Matador production, as Gomez has notched two double-digit performances against UCSB. The Gauchos should now be familiar with this high-octane tandem, and limiting what these two can do with the ball should be a priority.

“CSUN is the only team with two players on first team all-conference,” Pasternack said before calling Matadors’ Mark Gottfried a “terrific” head coach.

Tipoff time is set for 12 p.m. this Thursday, March 14, as UCSB is set to face off against CSUN in the Big West Tournament Quarterfinals.