The “Hella Black Podcast” centers on Black issues and works to uplift Black organizers and educators addressing these issues, Simons and Parham said in their introduction. 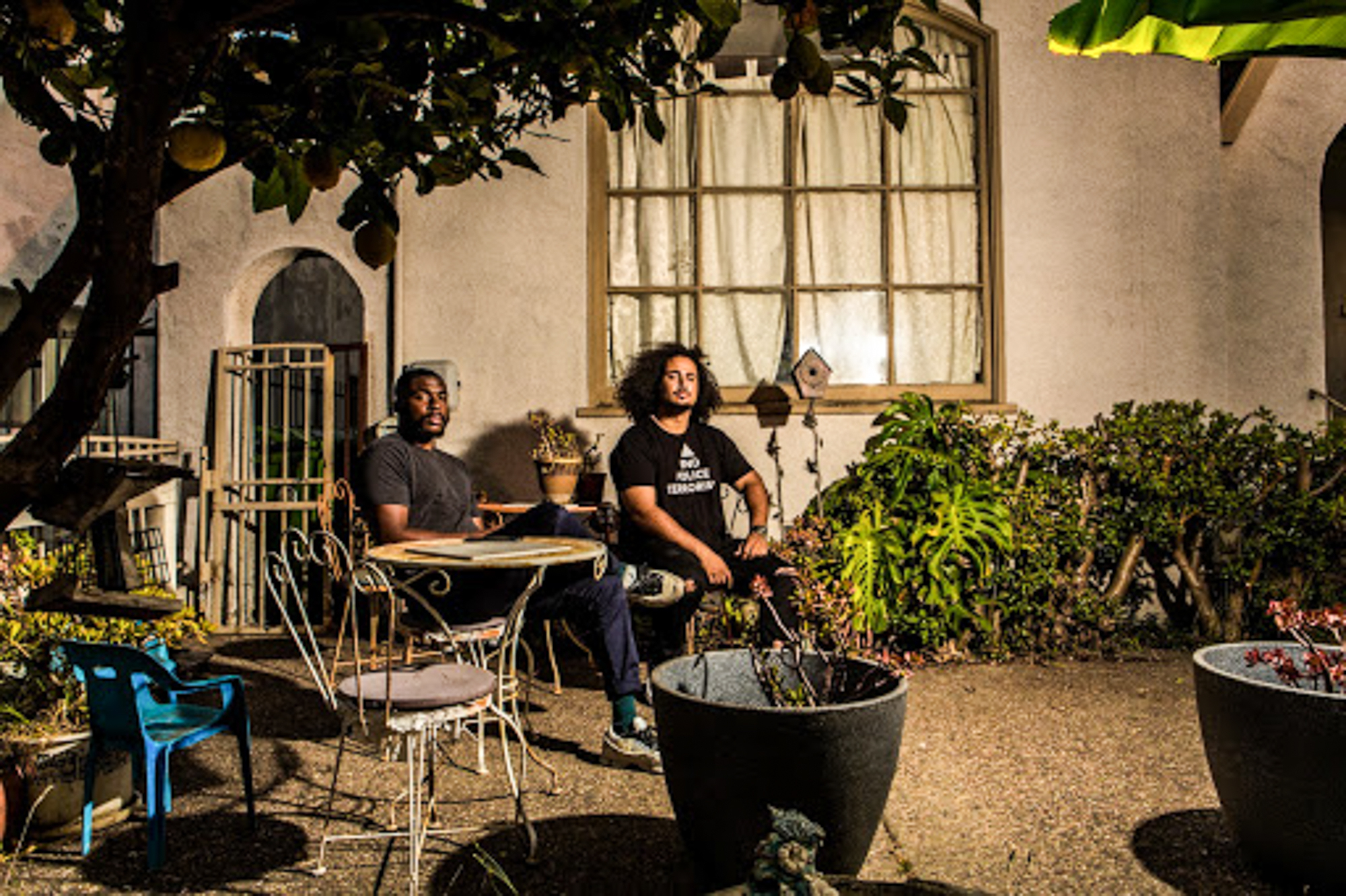 The pair spoke at UCSB on March 1. Courtesy of Blake Simons and Delency Parham

“While it may be March 1, Black History Month has no end, it’s all year long. I’m excited and honored to announce that tonight we can continue and uphold that legacy with some of the most radical organizers I know,” Gessesse said.

Gessesse urged students in attendance to support the hosts through Patreon, the content creator crowdfunding service, as few publicly funded resources exist for this kind of political education, she said.

“Without the funds we really can’t be free and educate our people, which is something I really admire about their labor,” she said.

Parham, in his opening remarks, addressed the audience on his and Simons’ intention to establish a safe and inclusive space for the duration of their show.

“Definitely want to start by acknowledging this room is a safe space for all Black folks, we’re not free until all of us are free. If you’re not with that shit, y’all know where the exits are.”

Parham said he decided to start the podcast after graduating with a degree in journalism and spending a week with his mentor in New York, who was already a podcaster. He recalled being repulsed that the superficial commentary and focus on trivial issues by white men received obscenely high compensation, he said.

“All I seen was hella white men talking about shit that didn’t matter. It’s disgusting when you see how much white folks get paid for their bad ideas,” Parham said.

Parham and Simons called attention to their organization, the People’s Breakfast Oakland, stating that merely talking about Black issues was inadequate when people are not addressing material needs.

“It’s important that we engage in these communities that we claim to serve … what are you doing besides just talking about shit?” Parham said.

A tradition for the podcast, Parham and Simons began the night with their segment called “Black Joy,” where the co-hosts highlight a recent positive experience in their lives in-between episodes.

“One of the reasons why we start the podcast [this way] is to center joy and having joy in the movement is important. Black joy, not that white shit, that hella Black joy,” Simons said.

Simons then addressed the contradiction of being an individual Black student charting their own educational path, particularly in a predominantly white institution, with the reality that the mass struggle of Black people is why they are allowed to attend, he said.

This was a recurring theme throughout the live show; Simons and Parham said that as educated, radical organizers, they believe in the importance of Black students putting into practice the knowledge they gain in higher education in order to benefit their communities.

“What can you do as a Black student to advance the next generations of people, because there will [always] be another 18-year-old or 17-year-old. How can you make this campus more inclusive to them?”

Simons brought up his time as a BSU organizer at UC Berkeley, and Parham discussed his reporting of the BSU’s fight for institutional change at the university to benefit Black students. These actions led to the creation of the Fannie Lou Hamer Black Resource Center at UC Berkeley.

Parham encouraged students to remain resolute and aware of the importance of their activism and its precedent in the Black struggle, claiming “don’t let these crackers sway you, period, point blank.”

“What can you do as a Black student to advance the next generations of people, because there will [always] be another 18-year-old or 17-year-old. How can you make this campus more inclusive to them?”

The pair commented on the developing situation and statement from the UCSB’s BSU Demands Team, who have been fighting for a black resource and development center over the past 50 years. UCSB recently addressed and agreed to meet several of the BSU’s demands.

Simons advised Black students to fight for their people on and off-campus as well, thinking about those who cannot afford to attend college. Simons reiterated his and Parham’s stance on Black students using their education to advance the cause of their people.

“If you can’t explain these theories that you’re learning to your cousin or to your grandma, what good is that theory? What good is talking if you ain’t taking action?” Simons said.

The hosts then offered their thoughts on the forthcoming election campaigns for President of the United States, particularly on Kamala Harris. The duo made clear their denunciation of her politics, skeptical of other current black leadership and critical of purely elections-based politics.

“A lot of us as Black people can’t seem to recognize anti-Blackness and white supremacy outside of whiteness,” Parham said.

Parham added, before pressing further into the subject, that a rejection of any commentary about Kamala Harris that is grounded in misogynoir, which is sexism or misogyny targeting Black women specifically.

Parham and Simons had harsh words for Barack Obama as well, believing that he furthered an oppressive system that subjugates people that look like him.

“[It’s] strategic, I always tell people ‘Obama was the best chess move for white supremacy,’ because you can put a Black face on it and it’s still going to do its job,” Simons said.

The two weaved together past and contemporary history, using the words of Black leaders like Martin Luther King Jr. and Malcolm X to highlight their thoughts regarding integration and the dichotomy of the ballot or the bullet.

Simons concluded with some words about the power of history, and its necessity in understanding the trajectory of revolutionary struggle and the questions which arise from this process.

“We come from a perspective, a revolutionary perspective, right? When we think about these systems we have to understand the history, it ain’t just an individual,” he said.

Simon said that Black people must ultimately ask, “What does it mean to be a revolutionary?”

Typical racists. Give me free stuff and blame everything on the Jews.

Get off your high horse. It is a Black group and therefore cannot be racist.

Just what we need at UCSB, more antisemitism.

These goyim need to learn to respect gods chosen people. Anti-semitism or any form of white nationalism can never be accepted. Much love from Israel.

Stop the thinly veiled antisemitism. Everyone knows you are not Jewish; just a hater.