The Daily Nexus attended the Associated Collegiate Press Conference in La Jolla on March 1-2, where staffers received seven awards for content produced over the last year. 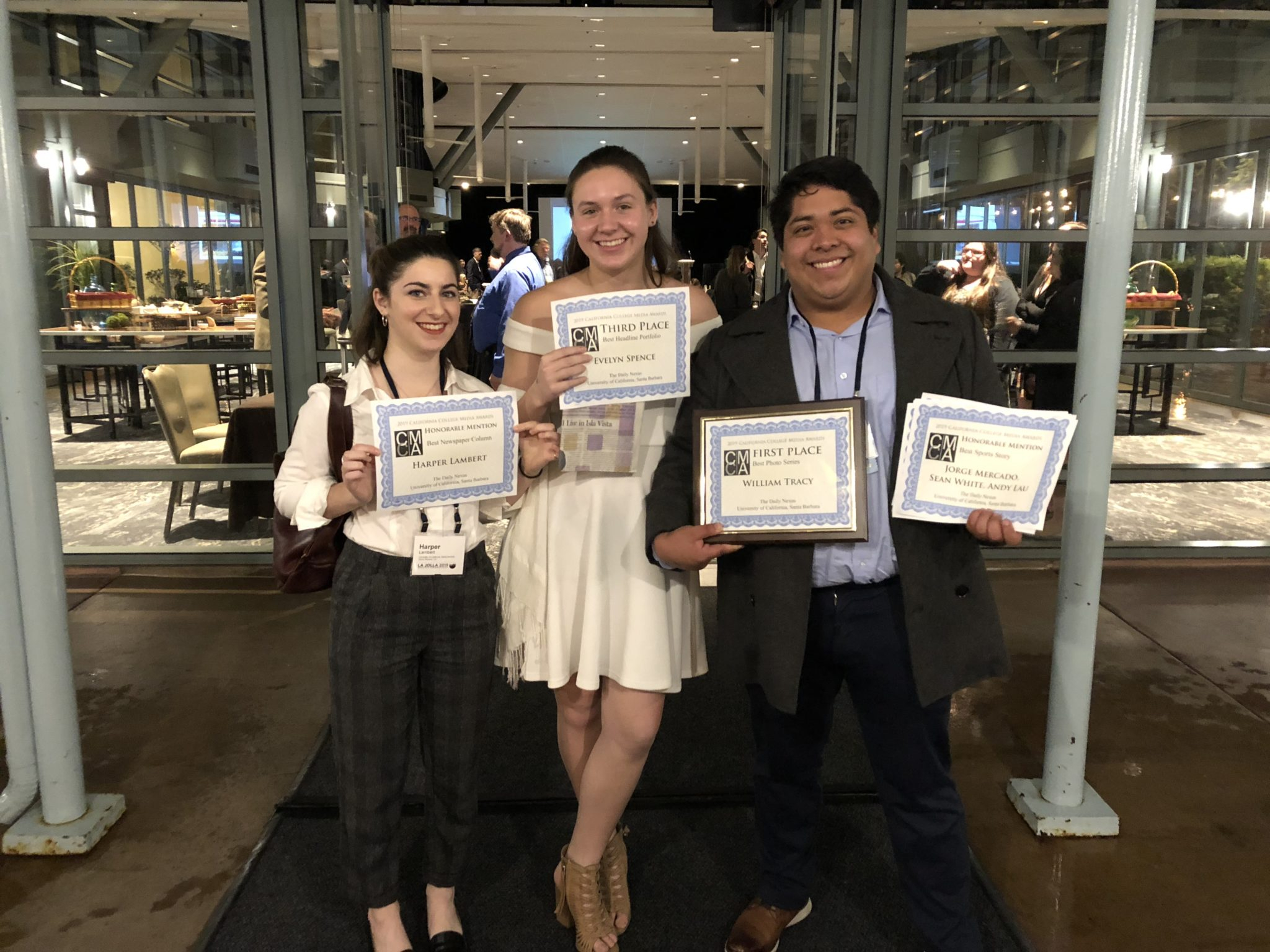 Editor-in-chief Jorge Mercado also spoke at a panel called “Leaving It Better Than You Found It,” where he and other editors-in-chief talked about what it was like to lead a newsroom whose staff changes from year-to-year.

Nexus alum Phi Do, who founded the data section the Labyrinth, was one of the speakers at the conference as well. Do gave a presentation on what it was like to start a data section at the Nexus and gave tips to other student newspapers interested in starting their own data sections.

Looking to start a data section at your student paper? I had the pleasure of giving a talk at @acpress this weekend about how the @dailynexus did just that – and how you can too!

Slides from the talk here: https://t.co/ZlLSs6ixVN

If you have any qs, feel free to hmu anytime. pic.twitter.com/gPrpQ7NQtX

Do now works at the Los Angeles Times data desk.

All of the California College Media Association awards the Nexus received are listed below.

The Associated Collegiate Press (ACP) Conference is an event the Nexus attends yearly. This year, the Nexus was able to send 13 staffers to the conference to learn more about investigative reporting, innovative page design, fostering conversations through the opinion section and more.

Here’s what some staffers had to say about the conference:

As editor-in-chief of the Nexus, my goal is to always find new and creative ways to not just diversify content but to also keep our staff happy so they could perform at their best. I went to two workshops taught by older people in this industry which focused on keeping morale high in newsrooms, and it was very informative. To me, people do their best work when they are happy and motivated to do said work, especially in college. So being able to learn new ways to keep everyone engaged was a great experience and something I hope to pass down to the future generations of this paper.

Additionally, having the opportunity to speak in a panel with EIC’s from other universities and be in a space where we could discuss the hurdles we have faced was special. A lot of times, being an EIC is making a lot of judgment calls, and so when you have the opportunity to reflect on them and talk them over with other people in your position it feels wonderful to be heard on that same level.

Lastly, having the opportunity to meet people in this industry that have broken through was a once-in-a-lifetime opportunity. I was lucky enough to speak to a former editor-in-chief of the Washington Post one-on-one and he gave great insight into this field and what it is like going forward. Ultimately, the ACP conference made me excited to see not only what I am going to do in this field but what the rest of my wonderful staff will eventually embark on.

A lot of what I’ve learned about working in news has been on-the-job experience at the Nexus. So when we get opportunities to attend workshops and hear from people who have been working in the field for years, it helps us learn more about the best practices in reporting, interviewing and innovating in the newsroom. At the ACP conference, I was able to learn from several journalists at the San Diego Union-Tribune, both about investigative reporting and what it’s like to lead a newsroom when the business model is changing.

The best thing about the conference to me, however, was being able to talk to other student journalists, especially those at other UC campuses, about their experiences working at their student papers. UCSB doesn’t have a journalism major, and the journalism certificate program is still very new, so there isn’t really a place for us to learn from others as we work to improve our paper. Having that space to talk about our shared experiences as well as what we’re all doing differently was eye-opening, and I definitely came away with a ton of ideas I want to try out to make the Nexus a better paper for the community we cover.

Being able to attend the ACP conference for the first time was a really exciting opportunity (especially as someone who was out of town last year and had terrible FOMO). Being a non-news section, it is very easy to feel like the overlooked, illegitimate cousin of news, and to be honest this conference felt no different. However, that was to be expected and I went in with an open mind because of that. Belonging to a section that is not often prioritized and walking into a conference catered mostly to news writers, I was pleasantly surprised to find a variety of workshops and talks geared toward my interests.

One particular workshop I found useful and interesting dealt with the ins and outs of arts and entertainment reporting. While one can never be fully prepared for an interview — especially with an artist or a musician — there are ways to make these tasks less daunting. The speaker not only gave us helpful tips like how to get an artist to open up (especially one that’s used to hearing the same five questions on an endless loop), he also gave us insight I would’ve never expected, like to always use the bathroom if you’re interviewing in somebody’s home, because you never know what you’ll find there (apparently Michael Bublé keeps his gold records in there).

However, being an opinion editor, this is where I believe I found the most use of the workshops. Matthew T. Hall from the San Diego Union-Tribune spoke on the importance of opinion writing as well as its interaction on social media.

The most gratifying part of the conference, though, was being able to see alumni in action. Knowing that even without a journalism program that it’s still possible to attain a viable and successful career gives me hope for my own future as well as the future of Nexus writers.