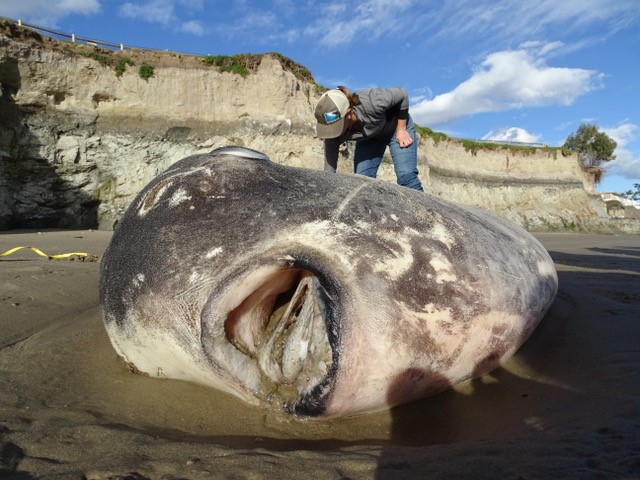 Jessica Nielson examines the seven-foot hoodwinker oceanfish that washed up on a beach in Santa Barbara. / Courtesy of Thomas Turner

The hoodwinker sunfish (Mola tecta) was found at UC Santa Barbara’s Coal Oil Point Reserve when it washed in with the tide.

The fish’s identification was confirmed by Marianne Nyegaard, the world’s leading expert on the hoodwinker and discoverer of this species in 2017.

UC Santa Barbara staff aided in the hoodwinker’s identification. Jessica Nielson, a conservation specialist at Coal Oil Point Reserve, was alerted by an intern that the stranded fish had appeared at Sands Beach.

The general assumption was that it was likely an ocean sunfish (Mola mola), the only sunfish species that frequents the Santa Barbara Channel.

When Nielson posted the news on the reserve’s Facebook page, Thomas Turner, an associate professor in UCSB’s Evolution, Ecology, and Marine Biology Department, decided to check out the sunfish up close. With his family, Turner went down to the beach. He took pictures of the unusual-looking fish and uploaded them to iNaturalist, a citizen science site which relies on crowdsourcing to identify submissions.

Across the world, Ralph Foster, an ichthyologist at the South Australian Museum, saw Turner’s photos in iNaturalist.

“I was extremely surprised to find that the observation came from California and not New Zealand or Australia where previous records have originated,” Foster wrote in an email.

Foster immediately contacted his collaborator, Nyegaard of Murdoch University in Australia, to inform her of the sighting.

“Ralph and I often discuss sunfish ID on the iNaturalist platform, but this one was absolutely extraordinary because Ralph asked if I thought it could be a hoodwinker – in California!! I was so absolutely totally sceptical, as I have many times before been excited by a ‘hoodwinker’ sighting in the Northern Hemisphere, which then turned out to be just a Mola mola or Mola alexandrini photographed from a tricky angle,” Nyegaard said via email. 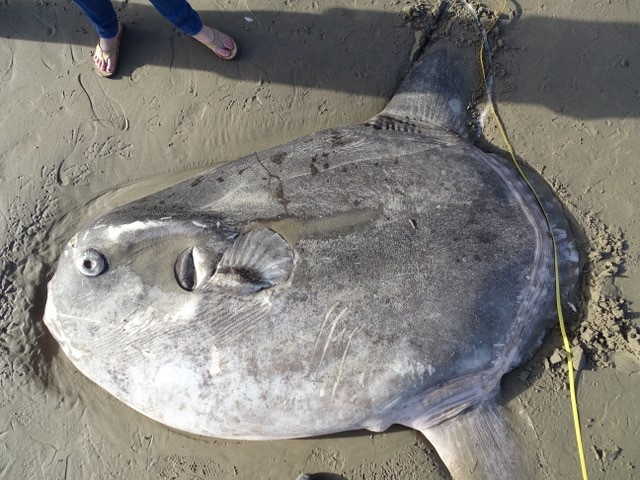 Nielson and Turner measure the clavus of the hoodwinker. / Courtesy of Thomas Turner

While the body form of the Californian sunfish looked much like that of Mola tecta, the images didn’t clearly show the diagnostic features they needed to positively identify it as a hoodwinker.

“I was therefore extremely reluctant [to identify it as a hoodwinker] and kept thinking I was being hoodwinked by this cheeky Californian fish,” Nyegaard continued. “There are three species of Mola, and they can all look deceivingly similar in that they all resemble outer-space alien fish modelled over a supersized pancake with wings.”

The sure way to tell the different Mola species apart is to check the back flap, or clavus, where a normal fish’s tail is, Nyegaard explained. The hoodwinker has a distinct clavus, with a strip of smooth skin dividing the clavus into an upper and lower part. Additionally, the Mola tecta has a low number of bony structures called ossicles on the clavus, different scale structures and a slimmer size.

“As Marianne commented, the fish seemed determined not to give up its ID!” Foster said. “It was Tom Turner and Jessica Nielsen of UCSB who came to the rescue. Marianne arranged for them to revisit the specimen and examine and photograph the relevant features. But this relied on them being able to relocate it after the tide receded.”

Turner went back to the beach at night to try to find the sunfish, only to realize it had floated away on the tide. “At this point, I’m thinking ‘oh, man, we probably had this amazing discovery and we’re never going to know for sure [what it is],’” he said.

The following day at low tide, he and Nielson started at Campus Point and Coal Oil Point, respectively, and converged. Sure enough, they found the missing fish, now at an Isla Vista beach. They took tissue samples and better-quality pictures of the mystery sunfish, which then allowed Nyegaard and Foster to definitively confirm it as a hoodwinker sunfish.

“The wait to hear if they were successful was nerve-wracking but when the photos finally came through and the ID was beyond doubt, frustration turned to elation,” Foster said.

“I was sitting on the edge of my chair that day here in New Zealand trying to be calm, but when their email with photos landed in my inbox I nearly fell off my chair. It was so unbelievably exciting and incredible! The photos were super clear and unambiguous, showing the textbook Mola tecta scales and clavus ‘back-fold,’” Nyegaard said. 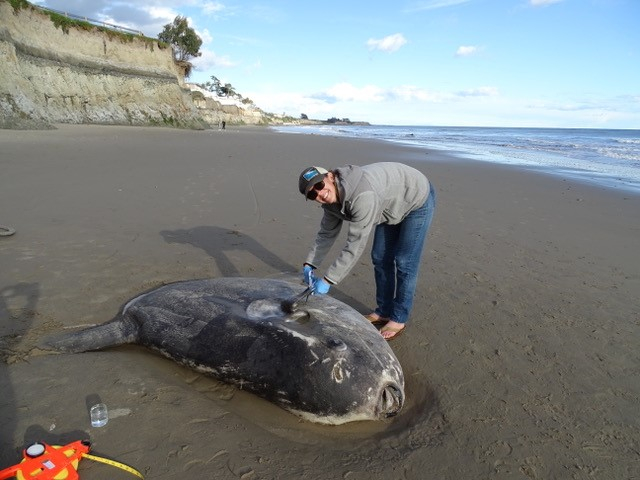 Now that the fish was confirmed as a hoodwinker, the next question was how did it cross the equator and end up here?

The researchers speculate about whether this was simply a lost individual but aren’t sure whether this happens regularly or was a one-time event.

“We’ve had to revise our ideas about where the hoodwinker may occur, however,” Foster said.

Nyegaard’s research indicates a temperate distribution in the Southern Hemisphere for this species. But with the Mola tecta having been formally described just in 2017, its distribution is not yet fully understood.

For now, Nyegaard will be using the tissue samples to compare the Californian hoodwinker to New Zealand hoodwinkers. With any luck, they may reveal the species’ population structures, including where and when it spawns, and if gene flow exists across the regions where it is known to occur regularly (Southeast Australia, New Zealand, South Africa, Chile and Peru).

Nyegaard, Foster and Turner all said they’ll be keeping a keen eye on iNaturalist after this thrilling encounter.

“The whole episode is testament to the power of citizen science and what the ‘connectedness’ of the world allows you to do,” Foster said. “To be able to rapidly arrange for a re-examination of diagnostic characters on the specimen, from halfway round the world, and have them reported back in real time is fantastic. Without this ability the fish would likely have passed unrecognised.”

For Turner, it was “a fun, natural history discovery. It’s been fascinating to see just how much interest there is in the story. It just goes to show you that people love biology, and I would encourage [people] to get on iNaturalist.”

Nyegaard said, “It was really quite surreal – exactly 24 hours after being alerted to the existence of this fish, we had a solid ID from an impromptu collaboration between California, Australia and New Zealand. All thanks to iNaturalist and people’s passion for the natural world and zest for adventure!”