On Wednesday, the Associated Students Senate unanimously passed a resolution calling for the UC Santa Barbara administration to disarm its campus police of all “lethal and military-grade hardware,” as stated in the resolution. 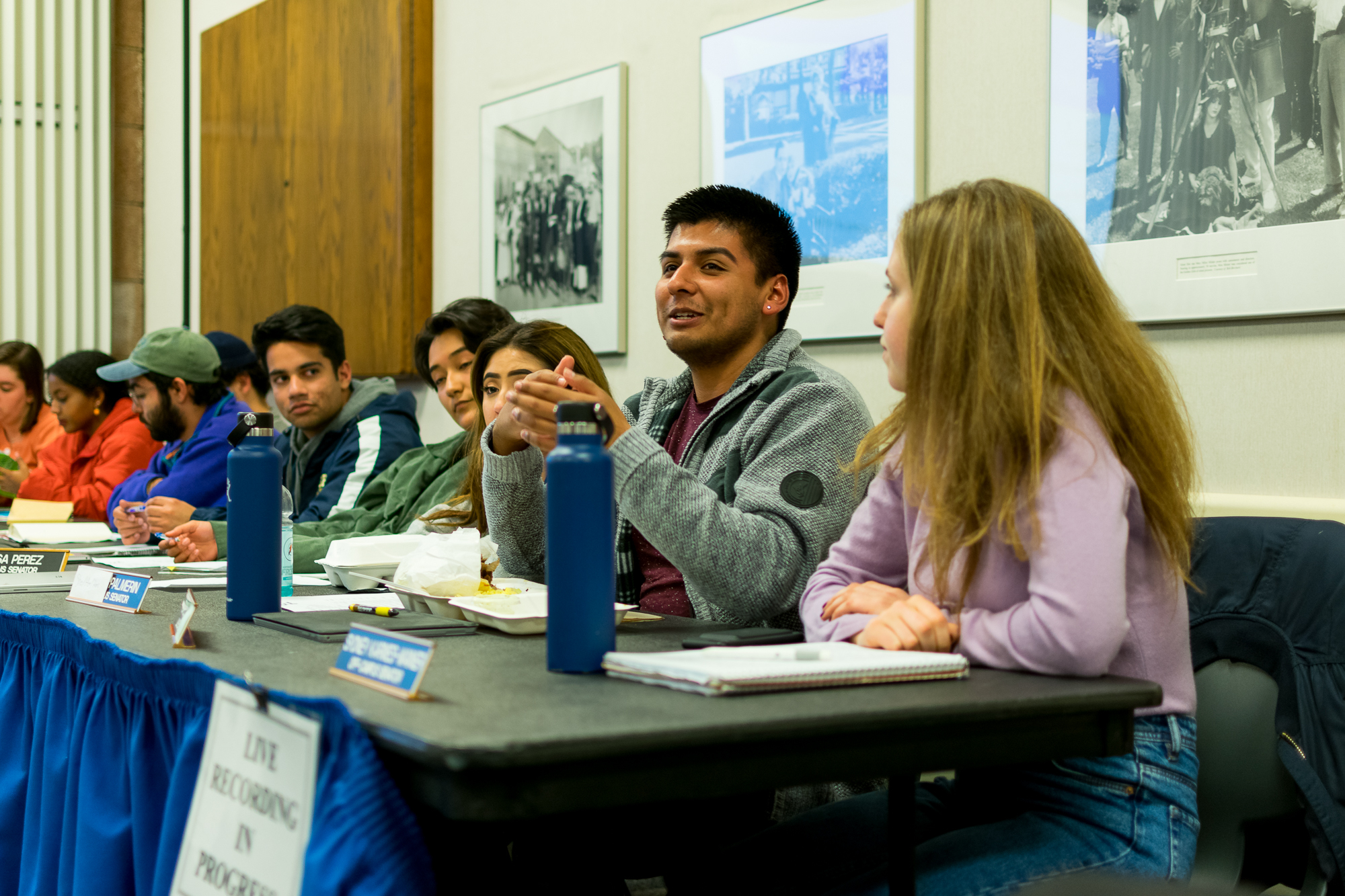 The resolution was authored by Senators Uribe and Palmerin. Ida Kazerani / Daily Nexus

The resolution also tasks the Associated Students (A.S.) President, Brooke Kopel, with authoring a letter to the Chancellor which will include “the dangers presented by an increasingly militarized police force” and “the dangers police have posed to the student body in the past.”

“Having the UC be armed is something that should not be happening, especially the UCPD,” Uribe said during Wednesday night’s Senate meeting.

Uribe cited Deltopia and Halloween as instances of “over-policing.”

“It should never get to the point where a trained officer has to use their weapon in any sort of capacity to a student… There are a lot of non-lethal ways that a police officer can make sure that a situation doesn’t escalate,” he said.

“It shouldn’t have to be the work of untrained civilians to de-escalate the situation.”

Ivana Cruz, the resolution’s student sponsor, stated that Wednesday was the 49th anniversary of the beginning of the Isla Vista Riot in 1970.

“It’s rarely talked about. The night of the Bank of America burning, a student was walking home from a liquor store and he was violently arrested because the police mistook his handle for a Molotov cocktail,” Cruz said.

“In the months following, apartments were raided by police and students were brutalized indiscriminately,” Cruz said. “This history has been especially brutal to the unnamed queer students and students of color who had already been targeted and profiled by law enforcement before even entering Isla Vista.”

“It’s bad for student mental health, and it’s definitely going to affect the way that our ability to function as students works.”

The resolution also calls for A.S. to develop student services “which are not dependent on police intervention.”

Fortunately all criminal activity on campus is committed exclusively by students!

The Yakima Kid
Reply to  Anonymous

I guess they missed Mr. Spree Killer a few years back. Too busy looking for Klansmen hiding in the campus police headquarters. I suspect it wouldn’t help to point out that there is very good reason to attribute the rise in “hate crimes” to an increase in hoaxes. Like the attacks on the Covington Kids who really did nothing wrong, unless you are so stupid as to think a MAGA hat is some variant of a KKK hood. My own particular fascination is in watching the gyrations being made by media, politicians, and activists to justify Mr. Smollett’s faux hate… Read more »

You spelled ‘fucking’ wrong, but idiots correctly & yeah, what they are.

The guy who killed 30-some people at Virginia Tech. Wasn’t he a student?

Most certainly, Asian as well, but it only counts if you’re white. By the way, Idiot Rodger was 1/2 white.

As a staff member i dont want to be on campus if the police are not armed. Unlike most students on campus i was here for Elliot Rodger, Halloween riots and many other serious events. Complaints of over policing are just ridiculous from people whose riots and desire for fun with no consequences leads to serious harm for many. How many hospital transports were there(how much garbage/human wast was left on the beach)the first floatopia when the police presence was minimal. The students have short memories and shorter attention spans. This idea is beyond stupid and puts the community at… Read more »

I agree! Retirement time for me.

They’re not saying abolish the police. They’re saying de-militarize campus police because students are not criminals and if you view them as such frankly you shouldn’t be a staff member at a university.

They are asking for the police to”disarm its campus police of all “lethal and military-grade hardware,” you do not have abolish something to make it useless. Police should have guns
The students in general are not criminals but there are student criminals and people who come to campus to do bad things.

Do we need to list the universities that have had on campus shootings? Should the campus police offer to just hear the shooters grievances while he continues to blast away? How naive are you Mr. Concerned. And, by the way, some students are criminals.

Really? Now, explain to me why disarming the police is so bad when we have really nasty incidents on campus in the recent past. Mr. Rodgers Neighborhood was not fun. The reality is the reference clear back to the 1970s shows the absolute paucity of any evidence of the campus police being militarized or behaving inappropriately in the last forty some years. Most of those supporting this ill thought demand weren’t even *born then.*

Couple of questions, fist, what makes you think the police think students are criminals…and second, how do you know some are not? From what I gather from the progressives on campus, there is a inherent “rape mentality” on campus…which means there are rapists all over the place…so with that, then yes there are obviously students that are criminals…just saying

I dont want my student to be a gaucho if the police are not armed. You will all be hiding under your desks if something happens meanwhile expecting law enforcement to protect you with what – words? How many students died when Rodger (a student) went on his shooting spree?

You’re dealing here w/ oversensitive crybabies who have been coddled & sheltered from the real world.

Apparently, A.S. is completely out of touch with reality. Time to disband this stupid group.

You mean Isla Vista Party *** – look at who wrote it

they have already been stripped of their brain…

OH MY GOSH DARN IT ALL. 2014?, Years of Halloween?, Flotopia?, Deltopia? RIOTS? Hell the UCSB/ B of A riot Pictures that adorn the NORTH HALL breeze way? and the staff member in late 2009 who caused the various admin buildings to be locked down after he was fired? Some day when you are sitting in IV with your double latte skimmed milk double shot with no whip and shots (not your latte through your freaking nose) ring out – bullets flying by your head, you will wish the police had at least a pellet gun. GROW UP and understand… Read more »

Let’s face it, you’re dealing w/ entitled dumbasses & they’re a product of dumbass parents. A bunch of little hypocritical cowards, that’s what you have here.

What a fuckin’ bunch of crybabies!

Let’s just disarm the police from a school that has a history including a school shooting and a car rampage, because certainly there won’t be any more school shootings across the nation of the United States! /s

Yeah it’s very reactionary and lacks foresight. I’m sure their intentions were good, but it ignores the history of the school and potential crimes. How lucky they are to feel more unsafe with armed police than fear what would happen if an incident occurred and police weren’t armed. The school is heavily policed for a reason.

I know those hypocrites post their “never forget: Isla Vista 2014” facebook pictures that they use as their profile picture for 24 hours, yet when it comes to having a chance to stop mass shootings, they chose to disarm the police. What’s next, arming professors? Smh

I dont think this has really taken into consideration what the campus police are. They are not private security, but are in fact peace officers whose authority extends to any place in the state, much like highway patrol or the marshals service. California Penal codes §830.2(b) and §32000(b)(4) empower them as law enforcment and will likely make any action like this difficult and unlikely to succeed.

Wow… I didn’t think AS would reach a level of stupidity such as this. But wait…. is IVP? Makes sense…

So when there’s a mass shooter, expect more people to die. Entitled leftist morons that support this are part of the problem. You have parents that coddle you, spoil you, and make you think you run the damn world. No wonder Trump won, because so many people are tired of your ”woke” (which isn’t even a fucking word) politically correct bullshit.

Shhhhh, no one cares what the crazy AS senate thinks.

Hey Cruz. I was there in 70 and still there in 72 , when they tried to burn it down again. I was very scared of the rioters. They were totally nuts. Thank God for the police.

I bet all of y’all who trust the pigs are white.

Pigs? Your concern for your fellow humans is noted.

Although many in the comments believe this is an ill-fated decision, I believe that the students will be safer without the presence of guns on campus. Just as they would be without the presence of guns anywhere in the US. The argument that there are inherent dangers and you need someone with a gun to protect you does not apply in America as it would in Israel, for example.

Sure, and we can leave our houses and cars unlocked as well, because all people are loving, compassionate and caring. We live in a utopia!!

As someone who has lived in both the US and Israel, and been involved in public safety in both countries, you’re wrong. The actual risk of being directly impacted as a victim of a terrorist attack in Israel is quite low. At the same time, violent crime in Israel is much lower than the US. You are around twice as likely to the the victim of a violent crime such as murder or rape in the United States compared to Israel. One could argue that some combination of a different culture, a more homogeneous society, and an armed population may… Read more »

Really? Unfortunately, the contemporary college student is generally unaware of history unless it is related to grievances. I suggest that the A.S. Senate read about the nice student who decided to kill and injure others a few years back. A little google search should not be beyond the abilities of even the most cloistered SJW.

Another note. I thought there had been rapes on campus. I don’t think having unarmed police walk up to a knife wielding or otherwise armed rapist and sing Kumbaya is going to turn out well. Perhaps the women who voted for this should agree not to report rape because such complaints tend to cause the adults in charge to arm the police. The same for anyone who is robbed – we need to understand that robbing is part of being “woke” and understanding the evils of capitalism and private property.

I guess there is nothing between militarized police and police being armed. Do the police need tanks and rocket launchers; no they do not. Do they need a reliable sidearm with the capability to stop a bad person doing bad things; yes they do.

This is solution to a problem that does not exist, unless I missed a rash of police shootings at UCSB?