The Daily Nexus
Sports
Gauchos Back in Town, Host Hawai’i and Cal State Fullerton in Conference Doubleheader
February 21, 2019 at 1:23 pm by Richard Benites 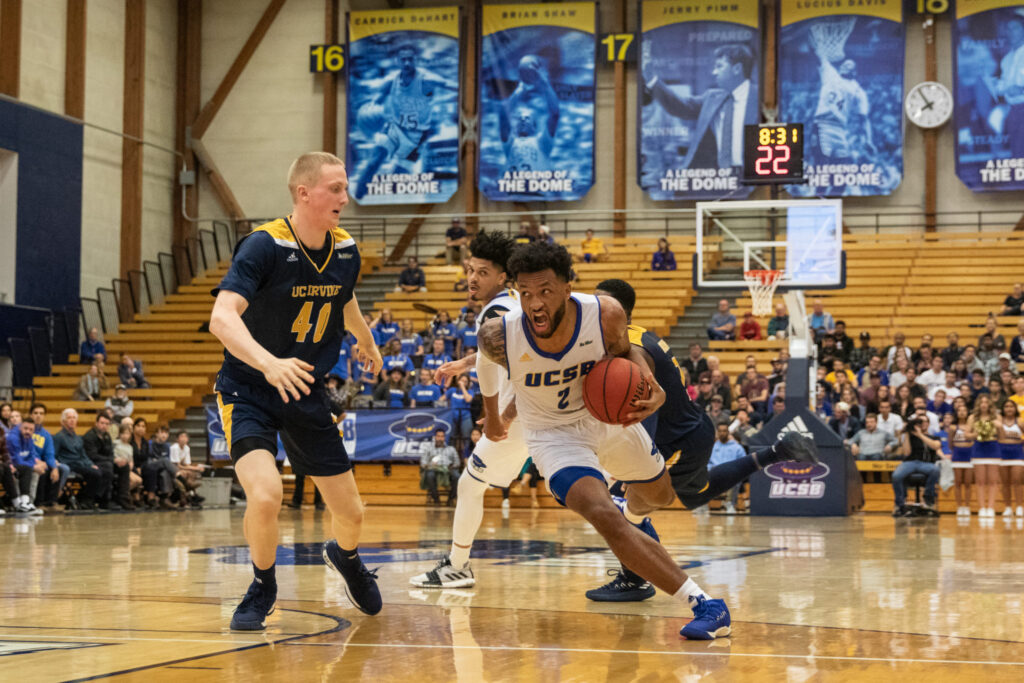 Men’s basketball returns to Santa Barbara this week, as the Gauchos prepare to host their last Big West doubleheader of the regular season. Following this week of play, only three more conference fixtures remain before postseason basketball commences.

After last week’s forgettable results on the road, in which UCSB fell 71-57 to UC Riverside and 83-70 to UC Irvine, the Gauchos will want to get back to their winning ways as soon as possible. This will be the second time this season that UCSB has faced both of these upcoming sides, with its earlier encounter against Hawai’i resulting in a 75-54 road win and an 81-60 road loss versus Cal State Fullerton.

Prior to UCSB’s current three-game losing streak, the Gauchos had gone all season without back-to-back losses. With the advantage of hosting these next two matchups, the team will have a unique opportunity to turn the tide back in its favor and finish out conference play strong.

On the season, UCSB currently stands at an overall record of 17-8, and a pair of wins this week would be enough to bring the win percentage back above the .700 mark.

The Gauchos’ conference record of 6-5 has them as a middle-of-the-table team at the moment, in terms of Big West league standings. Although the team’s away record of 5-6 isn’t all that exciting, its 10-2 home record should inspire the possibility of getting back on track this week.

If all goes well, the Gauchos can carry that momentum into next week, when they’ll host Long Beach State for the final home game of the regular season.

Thursday’s opponent will feature a Hawai’i side that has been on a roll as of late. The Rainbow Warriors stand at an overall record of 16-9 on the season but have won five of their last seven matches, with the Gauchos taking responsibility for one of those losses.

They’ll be coming off back-to-back wins, with their most recent resulting in an 87-64 victory over UC Riverside.

Historically, the UCSB versus Hawai’i all-time series has been thoroughly level, with an even 11-11 record in the 22 times these two sides have faced each other.

As for Cal State Fullerton, the Titans have seemingly found their form.

Although their overall record of 12-13 on the season doesn’t speak volumes, their 8-3 conference record does. Currently on a three-game win streak, Cal State Fullerton will be coming off a 78-71 road win over CSUN last time out. However, the Titans’ away record of 4-9 may favor the Gauchos’ dominance when defending the Thunderdome.

These two sides are historically familiar with each other, as the Gauchos only hold a slight all-time series lead of 47-40 in the 87 total matchups experienced.

Players to watch this week for the Gauchos include the backcourt tandem of sophomore guard Devearl Ramsey and junior guard Max Heidegger.

In the game against UC Irvine last time out, both players reached double-digit scoring. Heidegger led all Gaucho scorers with 17 points to his name, to go along with his stat line of three assists and two steals. Meanwhile, Ramsey appeared to be all over the court with his team-leading six rebounds on the night, along with a stat line of 11 points, three assists and two steals of his own.

As for Hawai’i, sophomore guard Drew Buggs and senior forward Jack Purchase appear to be the offensive catalysts for their side.

Buggs is a top-five scorer for the Rainbow Warriors, but he is best known for his playmaking skills considering he leads Hawai’i in total assists, by a wide margin, with 144 to his name — over a third of the team’s combined assists output.

Purchase, on the other hand, leads his team in total scoring with 295 points on the season, while coming in second in most rebounds for his side with a total of 150.

It’s the senior-guard show for the Titans, as Kyle Allman Jr. and Khalil Ahmad are the ones to watch for Cal State Fullerton. With only four points separating the two, Allman Jr. leads the Titans in total scoring with 444 as Ahmad follows closely with 440. Both players also find themselves in the top four of their team’s assists and rebounds category, and UCSB should expect their presence all over the court come game time.

All the action starts this Thursday, Feb. 21 , as the Gauchos host Hawai’i at 8 p.m., then Cal State Fullerton comes to town on Saturday, Feb. 23, with tip-off set for 7 p.m. Both bouts are set to take place at the Thunderdome.