The Daily Nexus
Science & Tech
Chasing the Ever ‘Moving Target’ of Ocean Restoration
February 21, 2019 at 11:52 am by Cristian Loza 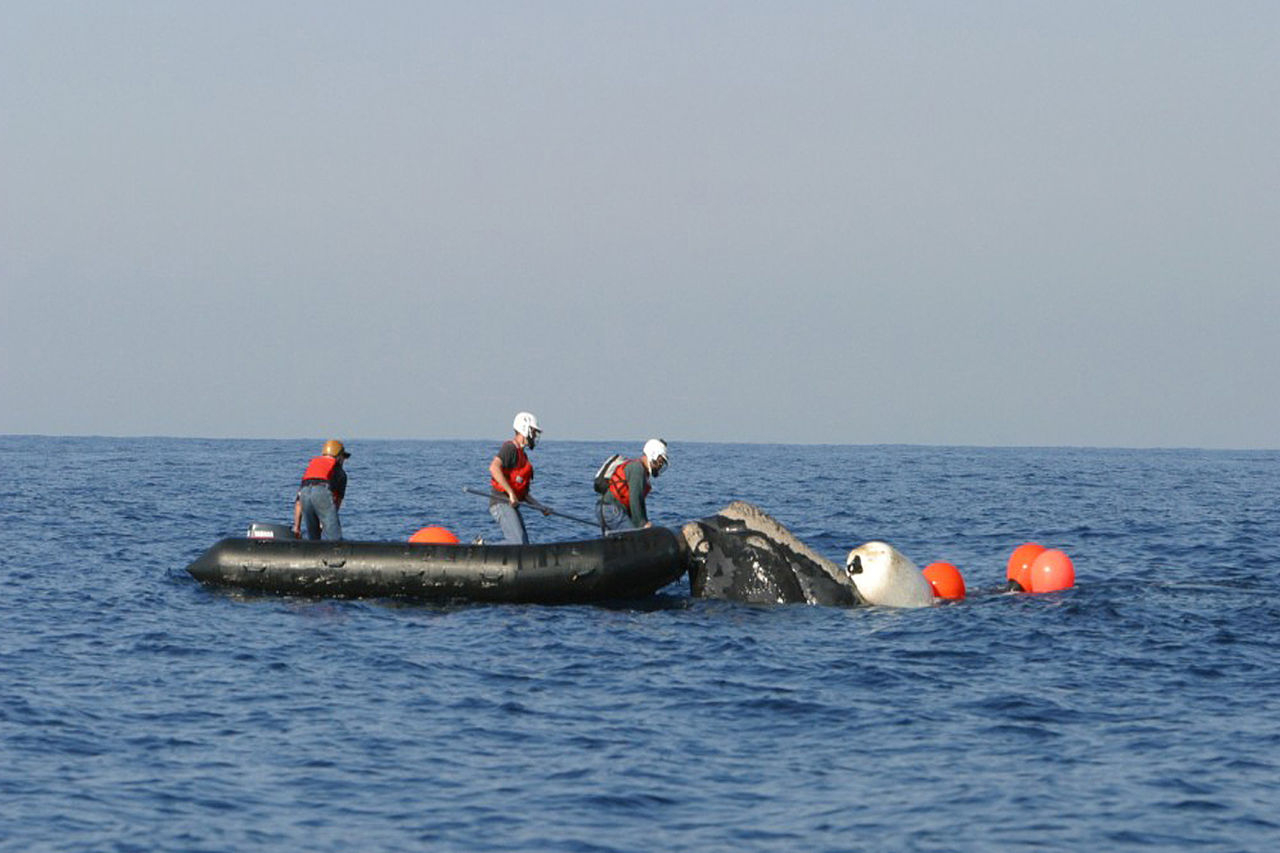 To boost the recovery of marine species, the NOAA has programs to disentangle large whale species. While such measures including ending the harvest of cetaceans allow for initial recovery, temporal changes in environmental conditions demand revisions in setting achievable recovery targets and implementing innovative interventions. / Courtesy of Wikimedia Commons

“There is a real disconnect between what you hear in the upper echelon of the political sphere and [what you hear from] the folks that are in the water doing their best to enable ocean recoveries,” UC Santa Barbara marine ecologist Kurt Ingeman said. Ingeman is currently working in Oregon to fight the uphill battle of ocean restoration in a rapidly changing environment.

With 2018 being the fourth-hottest year on record for global temperatures according to USA Today and the hottest recorded for ocean temperatures according to National Geographic, activists like Ingeman are striving to keep the world’s oceans alive and strong for both humans and animals alike. Ingeman, along with colleagues Adrian Stier and Jameal Samhouri, have recently published a paper in the journal Science that discusses the ever “moving target” that is ocean restoration.

This “moving target” not only reflects the human race and its demands, but also encompasses Earth’s changing environment as a whole. The pace and magnitude of environmental change, especially as systems, are prone to abrupt tipping points, and may overwhelm slow-moving ocean conservation efforts. In other words, this nimble target renders slower adaptive efforts useless.

“This is a slow and difficult process, but that is not the fault of the people doing work. In many cases it’s due to limitations in funding, so in order to develop the rapid responses required for climate change we need more funding, but unfortunately that is not always what we see with the priorities at the political level,” Ingeman said.

“Like turning a supertanker” is how Ingeman described making alterations to the governance side of ocean restoration policies. For example, the paper discusses how one-quarter of U.S. federally-listed species lack a recovery plan. Furthermore, half of these policies are over 20 years old and even fewer address climate change. Unfortunately, even the top members of our current administration have demonstrated they don’t believe in climate change.

“In the beautiful Midwest, windchill temperatures are reaching minus 60 degrees, the coldest ever recorded. In the coming days, expected to get even colder … What the hell is going on with Global Warming? Please come back fast, we need you!” President Donald Trump tweeted on Jan. 28 in response to the polar vortex that overtook the Midwest.

A study done by the Yale Program on Climate Change Communication in 2018 shows that 14 percent of Americans do not believe that climate change is happening. According to the U.S. Census Bureau, there are about 327 million people living in the United States, so 14 percent comes out to about 45.7 million people. Unfortunately, nationwide efforts to address ocean recovery are bogged down or rendered futile without discussing the elephant in the room.

To make matters more difficult, the idea of a successful oceanic recovery is not the same to everyone. Ingeman’s paper describes recovery as the return of population viability and ecological function. A component of this concept is to accept the possibility of a range of recovery scenarios rather than a single optimum state. This outlook is necessary when attempting to adjust to this moving target.

Fortunately, as a byproduct of evolving technology in the 21st century, the ability to spread awareness has widened the scope of conservation efforts.

“I think that the part of my job that is to communicate my findings and to get people to be aware of their impacts on the ocean has only gotten easier. The challenge is not getting lost in the sea of information,” Ingeman said.

Agencies like the California Department of Fish and Game and the National Oceanic Atmospheric Administration (NOAA) are constantly working to make people aware of their impact on our oceans as well as our planet.

“The personnel from the government agencies that I work with include California Department of Fish and Game as well as the NOAA. These are conservation heroes,” Ingeman said.

Santa Barbara County is doing its best to keep up with the moving target, as Santa Barbara Channelkeeper lists a total of 19 total Marine Protected Areas (MPAs) in its channel (five along the coastline and 14 surrounding the Channel Islands). These MPAs are dedicated to protecting wildlife from overfishing and overdevelopment.

“Support politicians at all levels that care about and demonstrate a conservation ethic. You can also vote with your wallet by choosing products that don’t degrade the ocean. Many people are on board with eliminating plastic straws, which is a great start, but there is more we can do like eliminating plastic packaging or taking a look at our seafood. To help recover the oceans is to be very careful and understand where your seafood comes from and be sure it’s from a sustainable source,” Ingeman explained.

The Monterey Bay Aquarium has a “Seafood Watch” app (available on iPhone and Android) that helps users buy seafood from sustainable sources.

With global temperatures rising, ocean health is at high risk for rapid degradation. According to a study by The Guardian, we have approximately just over a decade to act quickly as a planet, or the ever “moving target” of ocean restoration may become unhittable and unreachable. Now, more than ever, being timely in our actions matters.

Cristian Loza
Cristian Loza is a reporter for the Daily Nexus. He can be reached at news@dailynexus.com.