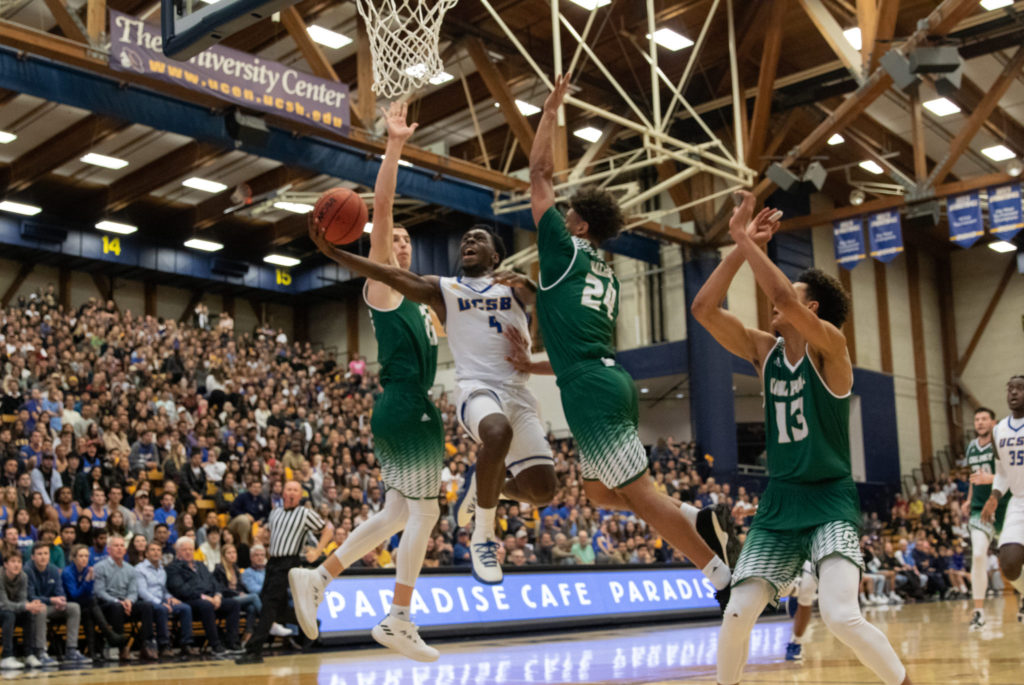 Devearl Ramsey scores despite two defenders being right on top of him. Angie Banks / Daily Nexus

It’s been a tough three-game stretch for the UCSB men’s basketball team and traveling to Irvine on Saturday didn’t help with the Gauchos’ recent struggles.

The 10-1 Anteaters rolled over the 6-5 Santa Barbara Gauchos with an 83-70 win as UCI remains atop the Big West while SB drops into fifth place with the loss.

The Gauchos started the season on a 14-3 tear heading into conference play, and won their first three Big West Conference matchups, but since UCSB has been limited to just three wins in eight tries and has seemingly lost its identity as of late.

Evan Leonard went to town on UCSB in the Eater’s eighth consecutive triumph with 23 points on 7-11 shooting including a 3-6 mark from downtown.

In the front court, graduate forward Jonathan Galloway notched a double-double behind 14 points and 11 rebounds for his fifth 10-and-10 performance this season and his second in the past three contests.

Junior guard Max Heidegger was the leading scorer for the Gauchos with 17 points on 7-16 from the field and 1-6 from deep. Four Gauchos scored in double figures including an 11-point, six rebound performance from Devearl Ramsey to tie a career-high in single-game rebounds for the sophomore.

Irvine caught fire from the field early with an 11-0 run to open up against UCSB and kept the pressure on as the lead swelled up to 30-10 within the blink of an eye.

Redshirt freshman Collin Welp has been a Gaucho killer all season and it was no different in the Bren Center on Saturday evening.

Welp added 10 in the first half on 4-5 from the field en route to a 12-point night in just 14 minutes on the hardwood. The last time these two teams met, Welp went 6-9 on field goals on his way to another 12-point performance while playing just 10 minutes. Imagine what this kid could do if he ran a full 30.

The Eaters’ lead hit a game-high 21 points after graduate guard Robert Cartwright corralled a Devearl Ramsey miss, took it coast-to-coast, and swung it out for a Max Hazzard triple with 5:15 left in the first to put UCI on top 37-16.

Gaucho freshman Jay Nagle caught fire for a five-point swing of his own to help cut the lead to 14 at the break as Irvine led 42-28 after one.

In the second, the Gauchos went blow-for-blow with UCI when Max Heidegger and Evan Leonard took over for their respective squads.

While Heidegger added 15 of his 17 in the second half, it was Leonard and Jonathan Galloway that stole the show to put it away for UCI.

The dynamic duo accounted for 25 of Irvine’s 41 second-half points while they shot a combined 7-12 from the field in the final 20-minute frame.

Although UCSB clawed back within eight at the 3:44 mark following pair of free throws by freshman Amadou Sow who had 12 points, Irvine capitalized from the line to close it out.

The Eaters drilled 15 of 18 from the stripe to close this one out, and the only misses from Irvine on free throws came from Galloway who went 4-8 from the line.

As if the Gauchos weren’t already struggling to stay afloat as of late, their schedule gets no easier from here.

The UCSB men’s basketball team hosts third place Hawaii who boasts a 7-4 record this upcoming Thursday, before the 8-3 Cal State Fullerton Titans who currently reside in the No. 2 spot of the Big West standings come to town on Saturday, Feb. 23.