Derived from Eve Ensler’s episodic play of the 1990s, “The Vagina Monologues” explores the experiences of women and non-binary individuals and centers on consensual and non-consensual sexual encounters, sex work, female genital mutilation and self-image.

This year, UC Santa Barbara’s annual showcase of “The Vagina Monologues” and Herstories — original UCSB student-written pieces that will be performed by their authors or casted actors — will be presented at Campbell Hall on Friday, Feb. 15 at 8 p.m. and Saturday, Feb. 16 at both 2 p.m. and 8 p.m. 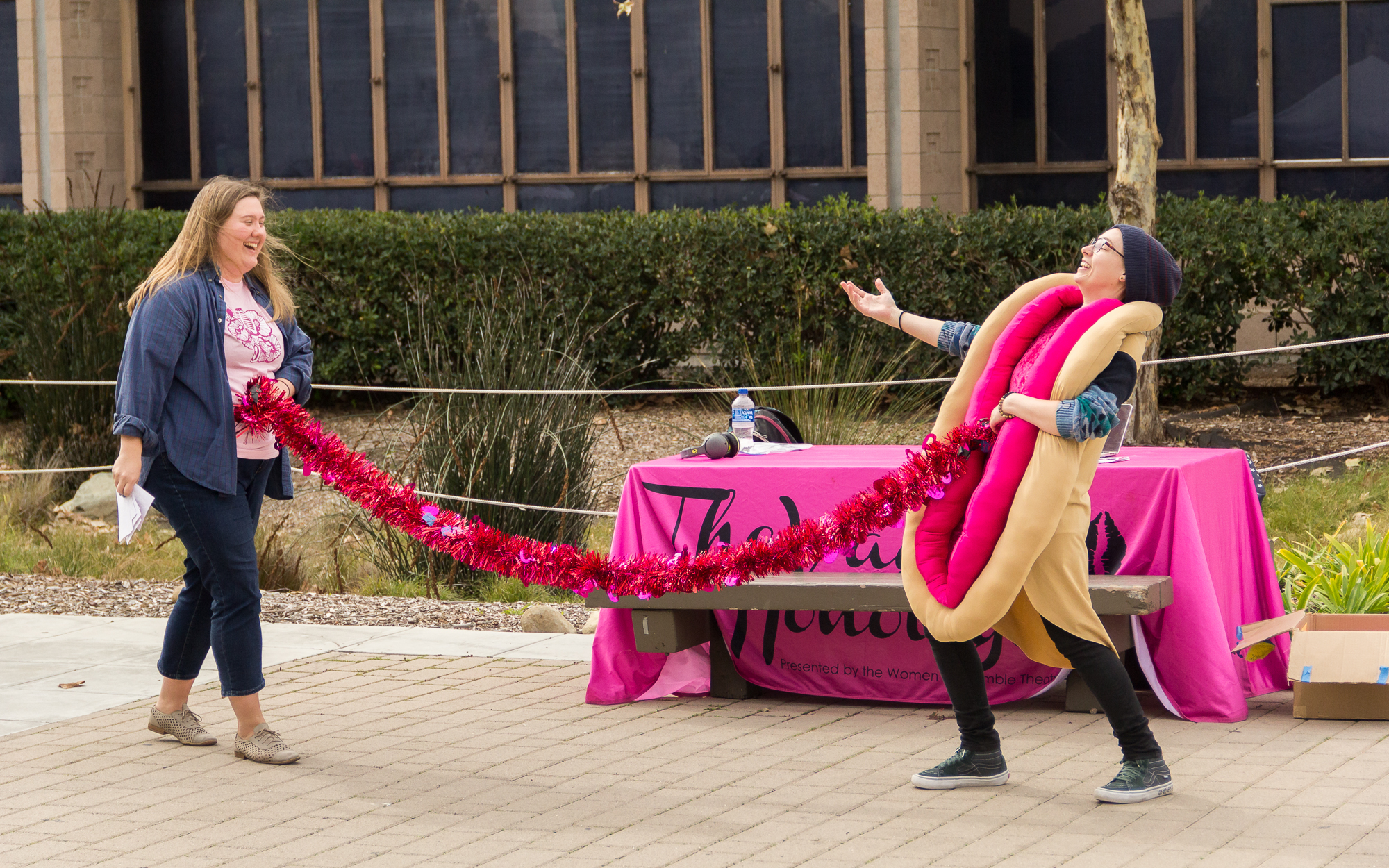 The theater troupe spent weeks before the event tabling in the Arbor and inviting students to attend the show. Leonard Paulasa / Daily Nexus

“Even though these pieces are from the ‘90s, they still hold truth because they were still pieces inspired by people’s lived experiences at that time,” Carlton-Carew, a third-year film and media studies major, said.

The casting process produced an array of people who could accurately portray the stories in “The Vagina Monologues,” according to Carlton-Carew.

“Sometimes we have random people who just saw the show, like maybe the year before… I was just so interested after watching the show my first year that I knew I had to be a part of it.”

While Carlton-Carew handles most of the logistics of the production, she will also be performing a self-written Herstory entitled “When I Was Seven,” in which she discusses her personal experience of black femininity in the U.S.

“It’s really important culturally for people to be aware of all the topics that we talk about because they play into a wide range of stories… Pieces from the original monologues still relate today,” Carlton-Carew said.

UCSB Women’s Ensemble Theatre Troupe Vice President, Kate Rossb, said she was inspired to become part of the production when she first saw the show her freshman year.

“Ultimately, [the show is] about people. We do target the female experience, but we also target nonbinary folk,” Ross said. “A lot of our pieces reflect cisgender women and trans women — a real variety of people and diverse experiences.”

The inclusion of a wide range of speakers, characters and actors makes “The Vagina Monologues” and Herstories influential on a college campus such as UCSB, Ross said.

There is a special quality about seeing familiar faces on stage performing, Ross noted, saying that one of the ways in which the monologues succeed is in their ability to portray a spectrum of perspectives through real and relatable people.

“It’s easier to distance yourself when it’s someone else’s words coming out of people’s mouths, but when you’re seeing someone up there, telling their story, and they’re your peers or it’s your sister or your friend or your friend’s friend, it definitely connects you more [to the story],” Ross said.

“We have these issues, but we don’t talk about them… I think it’s important to recognize what your peers are still going through even if you don’t see it on the day-to-day.”

“Given our political climate now, you can’t afford to say something is ‘not your problem,’ even if it doesn’t pertain to you directly because the world is so interconnected. You will feel some impact based on that,” she said.

“Even if you aren’t influenced by people’s stories and what they’re performing, it’s still good to be educated about what other people’s experiences are.”

The Monologues often deal with issues faced by students at university and reveal insights about students’ experiences.

“We have these issues, but we don’t talk about them… I think it’s important to recognize what your peers are still going through even if you don’t see it on the day-to-day,” Ross said.

After months of preparation and refining, Carew, Ross and the rest of the UCSB Women’s Theatre Troupe will finally showcase the production this weekend.

All of the show’s earnings will be donated to the Santa Barbara Rape Crisis Center, an organization that provides confidential counseling and support services to survivors of sexual assault and their loved ones, and the One Billion Rising Campaign, a global movement that aims to end rape and sexual violence against women.

In anticipation for the production, Ross is looking forward to finally seeing the pieces come to life.

“Seeing everyone perform their pieces is really inspiring. It really warms my heart to see how much passion everyone is bringing to their stories.”

Tickets can be purchased at the Associated Students ticket office.

Nyah Scott is a staff writer for the Daily Nexus and can be reached at news@dailynexus.com.