The Daily Nexus
Volleyball
No. 6 UCSB Puts 6-Match Win Streak on the Line at AVCA Showcase
February 7, 2019 at 5:45 am by Jorge Mercado 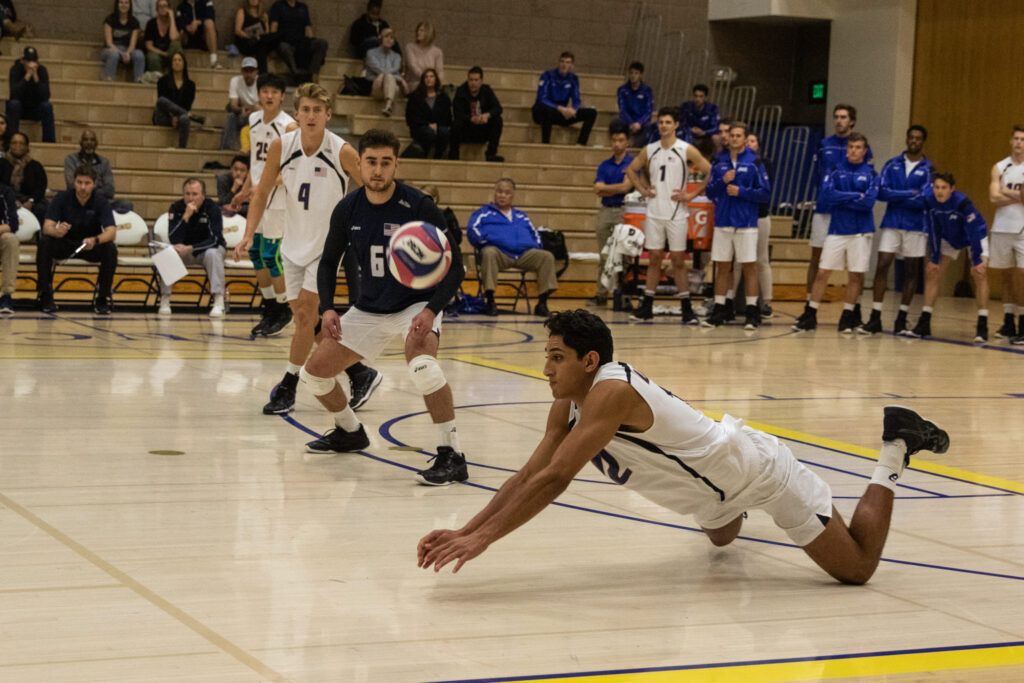 In college volleyball, the talk has been dominated by the top three teams in the country, all of whom reside in the Big West Conference: No. 1 (and reigning champs) Long Beach State, No. 2 Hawaii and No. 3 UC Irvine.

But after six straight victories, five of which have come against ranked opponents, and a winning margin of 18-6 in those games, it appears it is time to give some attention to the UCSB men’s volleyball team.

The Gauchos currently boast a 9-3 record, their best 12-game start to a season since the 2007 campaign, during which they also started 9-3. That year, UCSB went 20-12 overall.

This week, the Gauchos will face off against two unranked opponents, Ohio State and Penn State, in the AVCA Showcase hosted by Long Beach State. Ohio State holds a below .500 mark at 4-6 while Penn State sits at an even 4-4.

In its last week of play, Santa Barbara enjoyed great success. Last Friday and Saturday, the Gauchos pulled off two 3-0 wins against then No. 3 BYU.

The wins are what helped propel UCSB from No. 9 to No. 6 in the country while BYU fell to No. 7 behind the Gauchos, and with two more wins this weekend, it would become increasingly harder to ignore what Santa Barbara is doing.

A great part of UCSB’s success has been the play of outside hitters Corey Chavers and Ryan Wilcox. Both players have won a Big West Athlete of the Week award for the past two weeks, with Chavers winning Player of the Week and Wilcox winning Freshman of the Week.

The senior has come alive during this six-match winning streak, as he is averaging more than 18 kills per game and has tallied 13 service aces. In his first six matches of the season, Chavers only averaged 10.8 kills per match and had nine aces.

In the BYU series, Chavers racked up 33 kills on an incredible 5.50 kills-per-set average while hitting .309. The Downey, Calif., native also added six service aces across the two matches, three in each.

As for Wilcox, the freshman has stepped up his pace of play exceptionally in the last six games, having double-digit kills in three of them. Against BYU on Saturday, Wilcox set a new career high by tallying 14 kills on a very efficient .667 hitting percentage. He also had no errors in that match.

In general, however, the entire Gaucho team has been playing at a consistently high level. In the last six matches, UCSB has averaged a hitting percentage .326 per game and has only had one match in which it didn’t hit at least .300.

Santa Barbara will definitely look to keep up this high level of play as it prepares to face off against two opponents it isn’t too familiar with. Against Ohio State, UCSB leads the all-time series 7-2, but the two teams have not met since 2012, which saw the Buckeyes get the win. OSU recently lost 3-0 to Purdue Fort Wayne, a team UCSB defeated 3-1 on the road.

Some of the key players on Ohio State are redshirt sophomore outside hitter Jake Hanes and senior setter Sanil Thomas.

Hanes currently leads the team in kills with 133, while Thomas is not just the best setter on his team but also one of the best in the country, as he averages 10.24 assists per match (which is the eighth best mark in the country).

As for Penn State, the Gauchos also lead the all-time series 8-7 but have not defeated the Nittany Lions since 2010. When the two teams met back in 2017, Penn State, at home, bested UCSB 3-1.

In terms of this season, PSU has struggled against common opponents UCSB has faced, going a combined 0-3 with losses against BYU, Lewis and Loyola-Chicago. Penn State also lost to Ohio State 3-1 in its season opener.

Offensively, the Nittany Lions have a slew of offensive options, as their top three players each have over 60 kills apiece. Redshirt senior Matthew McLaren leads the team with 68 kills while teammate Jason Donorovich is one behind with 67. Donorovich also leads the team with 33 blocks and in service aces with 12.

Overall, UCSB is presented with a great opportunity this weekend. To win eight straight would be a huge accomplishment, especially considering that it would give the Gauchos 11 wins on the year, matching their entire total from last season.

The important thing for Santa Barbara is to stay on its toes and keep the pressure on. This will be the last weekend before conference play starts for the ’Chos, so keeping momentum is a top priority.

UCSB will take on Ohio State at 6 p.m. on Friday, Feb. 8, at the Walter Pyramid Arena and Penn State on Saturday, Feb. 9, at the same time and location.