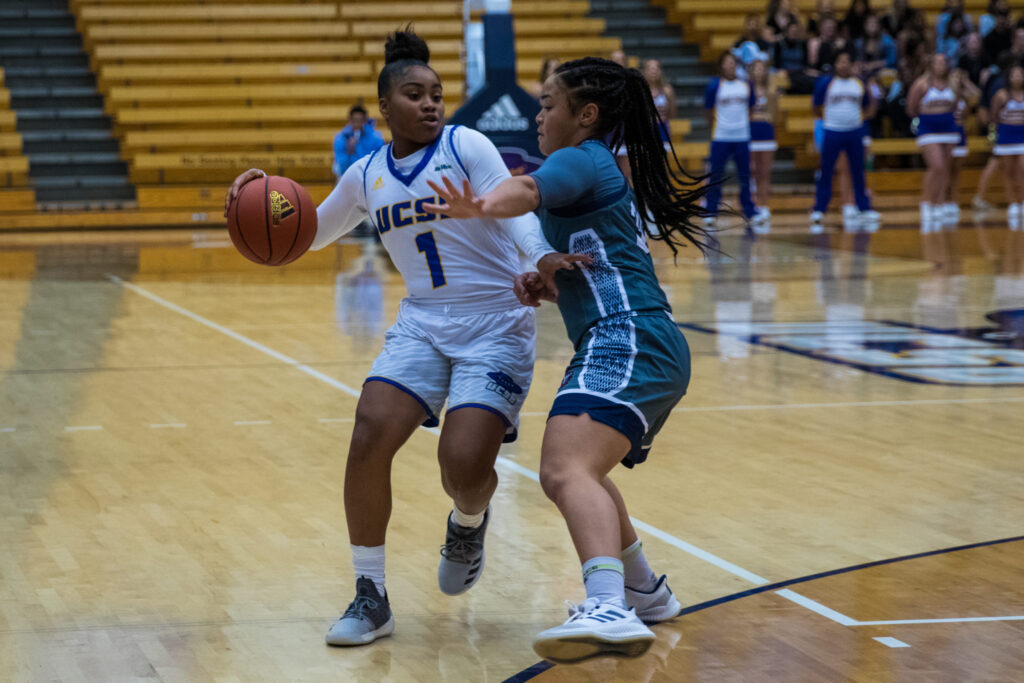 Despite an impressive defensive showing from the UCSB women’s basketball team, the Gauchos dropped their second straight game on Saturday, falling to Hawaii 47-35. With the loss, Santa Barbara remains in eighth place in the Big West Conference with its 1-4 conference record.

At times this season, UCSB has struggled to generate offense. Even before Saturday’s game, Santa Barbara was only averaging 56.5 points per game — tied with Hawaii for the fewest ppg in the conference.

On Saturday, however, the Gauchos set a new season low with their 35 points. Outside of the 13 points scored by junior center Natalia Bruening, no single UCSB player scored more than six points. Head Coach Bonnie Henrickson also once again failed to get production from her bench, with the team combining for only two points off the pine.

Last week, Santa Barbara proved it could win without the long ball when it defeated Long Beach State. This week, however, the Gauchos’ failure to stretch the floor ultimately doomed the team, as they shot 0-16 from deep — a new season low for them.

Some of the credit for the Gauchos’ shooting performance should be given to a feisty Hawaii defense. After giving up 14 points in the second quarter — and trailing 21-19 at the half — the Rainbow Wahine put the clamps on Santa Barbara, giving up merely 14 points in the entire second half.

The fact that the Gauchos were able to hang around despite their rough shooting night shows the defensive improvement of the team, something Henrickson has emphasized all season. Santa Barbara held the Rainbow Wahine to 35 percent from the floor, including only 26 percent from beyond the arc. The 47 points given up by UCSB are the fewest it has allowed in a game all season.

For Hawaii, senior forward Leah Salanoa led the way, scoring a game-high 14 points while shooting an efficient 6-9 from the floor. Junior forward Makenna Woodfolk also scored in double digits, dropping 10 points — including six points from the free-throw line. Outside of those two, however, Hawaii struggled mightily from the field.

On a night when the Gauchos made only 12 field goals, that was all the production the Rainbow Wahines needed to secure their third conference win on the season.

Outside of a double-double from Bruening, Santa Barbara’s starters couldn’t get anything going. Junior guard Coco Miller didn’t make a single field goal on Saturday, going 0-12 from the field despite leading the Gauchos with 14.6 ppg. Sophomore point guard Danae Miller also struggled mightily, going 2-13 from the field while also turning the ball over six times before fouling out in the fourth quarter.

Offensively, anything that could have gone wrong for UCSB on Saturday seemed to go wrong. Turnovers, foul trouble, the inability to stretch the floor — these issues all culminated in by far the worst offensive performance of the season.

Unfortunately for the Gauchos, things won’t get any easier this week when they travel to both Irvine and Riverside. So far this season, UCSB has only won one true away game: the 63-58 upset of San Diego State in December.

Regardless, Santa Barbara won’t stand a chance against either opponent if the team can’t figure out its offensive woes.

With only eight of the nine teams in the conference making the conference tournament, the Gauchos will need to get a few more wins under their belt if they hope to make to the postseason.

UCSB’s next match is at UC Irvine on Thursday, Jan. 31.