The Daily Nexus
Sports
Gauchos Stumble at Fullerton for First Loss in Over a Month
January 25, 2019 at 7:30 pm by Max Kelton 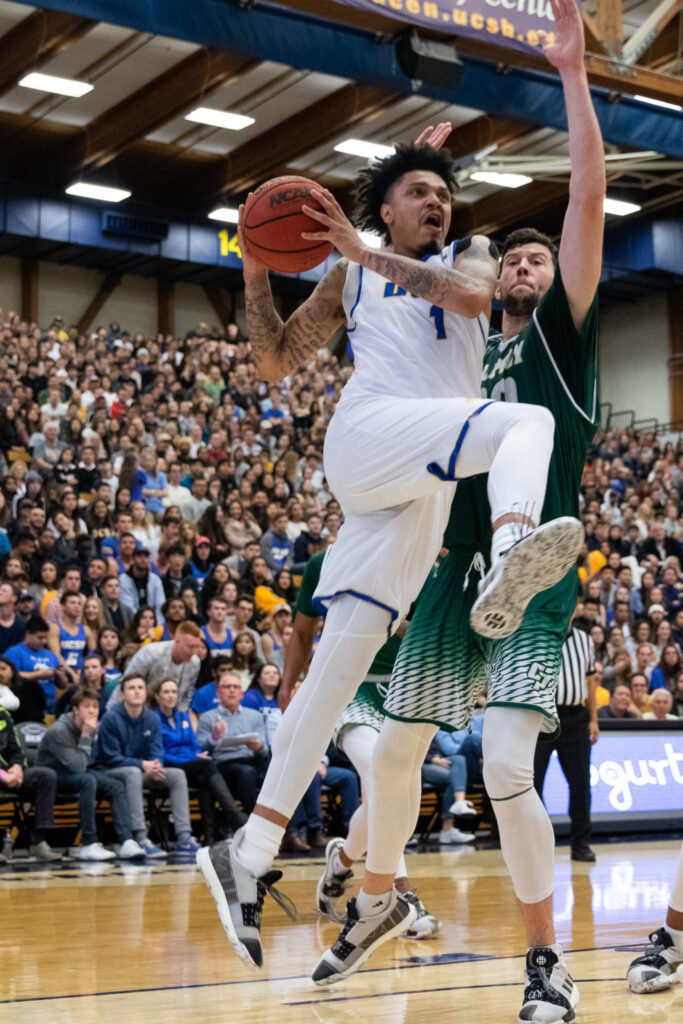 Before last night’s game against Cal State Fullerton, the UCSB men’s basketball team was one of 27 teams in the nation to be undefeated in conference play. Following a hard fought 81-60 loss to the Titans on the road, UCSB is no longer one of those teams.

The Gauchos dropped their first game in over a month to move to 3-1 in conference play and slide down to second in the Big West Conference standings behind a 4-1 UC Irvine team. Fullerton, on the other hand, has been playing red hot to improve to 3-2 in Big West play behind a triad of skillful and nimble guards led by senior winger Kyle Allman Jr.

Allman Jr. led all scorers with 21 points while shooting 7-13 from the field and 6-6 from the charity stripe as he dished out 4 assists en route to the Titans third win in a row. Senior Khalil Ahmad and junior point guard Austen Awosika added to the action with 19 points and 12 points respectively while all three guards had over 4 assists to fuel the Titan attack.

While UCSB scored the first four points in the game, the Titans’ pinpoint shooting and stout defense proved to be too much for the Guachos to handle. Fullerton shot 55.2% on field goals including a monsterous 63% in the first half.

The Gauchos had a 17-14 lead with 11:51 remaining in the first half after a four-point-play from freshman Jay Nagle, but that’s when the Titans started cooking while SB began to freeze up.

Through three games, UCSB has focused on stopping one significant playmaker from Cal Poly’s Donovan Fields to Dikymbe Martin on Riverside and TJ Shorts II with UC Davis. Yet, the Titans had three elusive guards to spread the floor and the Gauchos had no answer for it.

UCSB had a three and a half minute stretch with only two points when sophomore captain point guard Devearl Ramsey was off the floor, but his impact was felt immediately upon his return with seven minutes to play.

Ramsey grabbed a defensive board and took it coast to coast to cut the Titan lead back to three and on the ensuing possession, the Sierra Canyon product delivered a contested trey to tie it up once again at 26 a piece with 6:22 on the clock.

Fullerton turned it on at the end of the half to rout the Gauchos with a 22-5 run, 19 of those 22 points came from their three musketeers, who capped off consecutive buzzer beaters on the final two possessions of the half to balloon the lead up to a hefty 17-point deficit. On top 48-31 Fullerton ran into the tunnel at the break with the momentum fully in its control.

The Gauchos muscled their way back in the second half behind 6 points in two minutes from sophomore forward Robinson Idehen to cut it to 55-42 with 14:06 left to play.

The comeback felt imminent as UCSB was knocking down shots and getting stops. Devearl ramsey went on a 7-point run by himself to inch closer with 10:44 in the second half as he splashed a triple from the left wing to cut the deficit 9 points with a 59-50 lead for the Titans.

Ramsey closed in with another three at 6:54 to cut it to seven, but that was the closest the Gauchos would get as Fullerton closed out another half with an assertive 18-4 run behind the final 11 points from Khalil Ahmad to put the nail in the coffin and hand UCSB its first loss since December 19 on the road in Omaha, Neb.

Head Coach Dedrique Taylor made a crucial defensive adjustment in the second half as three Titans would collapse on the Gaucho ball-handler once they crossed the timeline. The Gauchos had no rebuttal for the Fullerton triple-trap and ultimately fell in the second half.

While Devearl ramsey had 15 points and Jaquori Mclaughlin added 11 with a career-high 8 rebounds, UCSB struggled from deep, shooting 8-28 from beyond the arc. The team couldn’t finish from the line going 54.5% from the line on 22 tries. The Gauchos allowed 46 points in the paint compared to just 22 that UCSB was able to convert and the open looks for Fullerton attributed to its 55% shooting night.

Four Titans scored in double-figures including a 12 and 12 double-double from junior forward Jackson Rowe as the Gauchos fell in Titan Gym. Although their overall 7-12 record may not reflect their skill level, Big West foes will be left bruised and burned if they don’t remember the Titans.

UCSB men’s basketball heads to Long Beach State on Saturday evening for a 7 p.m. tip-off against the 49ers in Walter Pyramid.