The Daily Nexus
Sports
UCSB Set To Travel South for Big West Doubleheader
January 24, 2019 at 5:08 am by Richard Benites 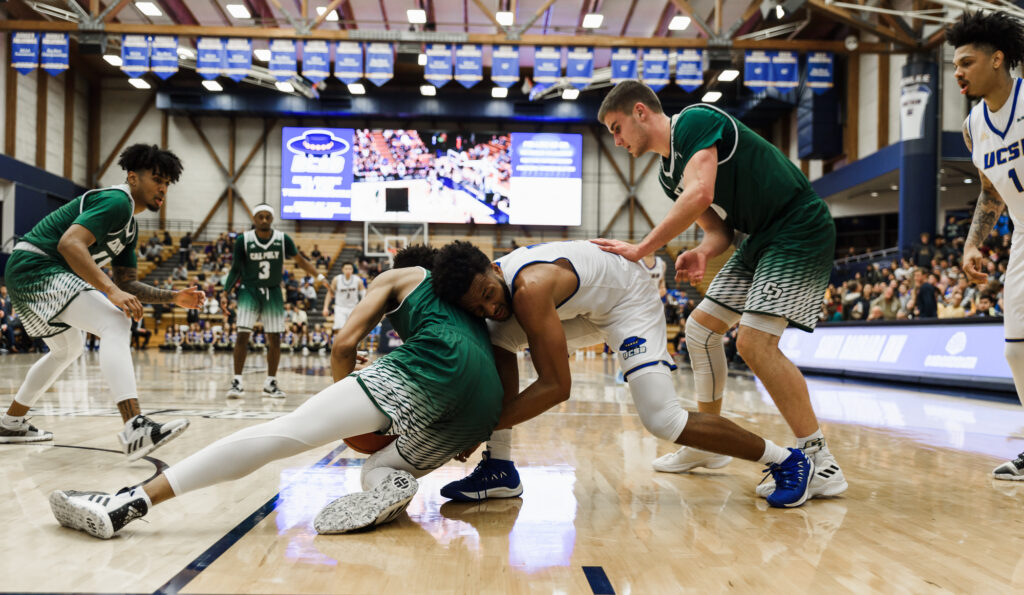 Men’s basketball continues this week as the Gauchos face two Big West opponents in Cal State Fullerton and Long Beach State, with both matchups taking place on the road.

This Thursday, UCSB travels down to Fullerton to take on the Titans. Then on Saturday, the Gauchos will once again head south toward Long Beach where they’ll face off against the 49ers.

Entering this week of play, the Gauchos find themselves in their best form of the season. Now besting their own five-game win streak from back in November, the Gauchos’ are currently unbeaten in six games and have been perfect through the month of January. At the moment, UCSB is also one of only 27 other collegiate teams in the nation who is unbeaten in conference play. The Gauchos will also be coming off their most recent road win after traveling to and defeating UC Davis by a final score of 69-58.

Altogether, the Gauchos currently boast a 14-3 overall record on the season. Notably, those three losses have all come from away games. UCSB still remains undefeated, 9-0, when playing at home in the Thunderdome. The men’s team will look to maintain their winning ways and continue their excellent momentum through this week’s pair of conference games.

Cal State Fullerton’s campaign hasn’t gone quite as well. The Titans are at a 6-12 overall record on the season and have only won one of their nine away games. When it comes to defending their home court, however, they have done well as they find themselves at a 4-2 home record.

The Titans’ have recently been on a small hot-streak of their own. Fullerton has won their last two games, with their most recent victory being a 92-90 overtime win against Long Beach State. Historically speaking, UCSB has faced Cal State Fullerton a total of 86 times, with the Gauchos leading the all-time series at a record of 47-39. The last time these two teams faced each other came in January of last year, where a close fight resulted in a 70-65 Gaucho road win.

As for Saturday’s opponent, Long Beach State’s season has been a bit better. Currently standing at an overall record of 8-11 on the season, the 49ers have shared a similar form of poor play on the road when compared to their ability to play at home. Boasting a 6-2 record whenever they’re the hosts, Long Beach State will pose yet another challenge for the Gauchos come time for tip-off.

The 49ers’ most recent form has also proven promising, as Long Beach State has won three of four games in the month of January; as they’ll be coming off their most recent, aforementioned, overtime loss to Cal State Fullerton.

In terms of the all-time series against the Gauchos, the 49ers take the advantage in this one with a 76-59 lead over UCSB in the 126 total games they’ve shared. The Gauchos will also look to even the score, considering Long Beach State was also the victor the last time these two sides faced; which resulted in a devastating 69-70 home loss for UCSB.

Nevertheless, this season has proven much more promising for the Gauchos, as this team full of veteran and young talents continues to shine.

Players to watch for the Gauchos include graduate guard Ar’mond Davis and freshman forward Jay Nagle. Davis is coming off an impressive 23-point performance in the latest win against UC Davis, also adding eight rebounds and two assists to his total. As for Nagle, he managed eight points from off the bench and a pair of rebounds in his 16 minutes of play.

On the Titans’ end, the Gauchos should expect a two-pronged offense revolving around senior guards Khalil Ahmad and Kyle Allman Jr. Ahmad and Allman are the only two scorers on their team to have surpassed 300 points on the season, and the dangerous duo has also combined for a total of 54 assists through the season.

As for the 49ers, senior guard Deishuan Booker has been lighting up the scoreboard as of late. He leads his team in overall scoring and also in assists, with a total of 78 to his name. This week’s recurring theme will be prolific guards, as the Gauchos will have to game plan against their next opponents’ outstanding backcourt players.

A conference standings update is in order, as the Gauchos are currently the only undefeated team in Big West play. Sitting atop the table at a 3-0 record, the only other team with three wins is UC Irvine, whom UCSB will be facing at home next week. Cal State Fullerton and Long Beach State find themselves at the middle of the table, both with only two wins. An important week for the Gauchos in terms of conference standing and opponent difficulty, snagging two road wins would mean the world for UCSB’s competitive campaign.