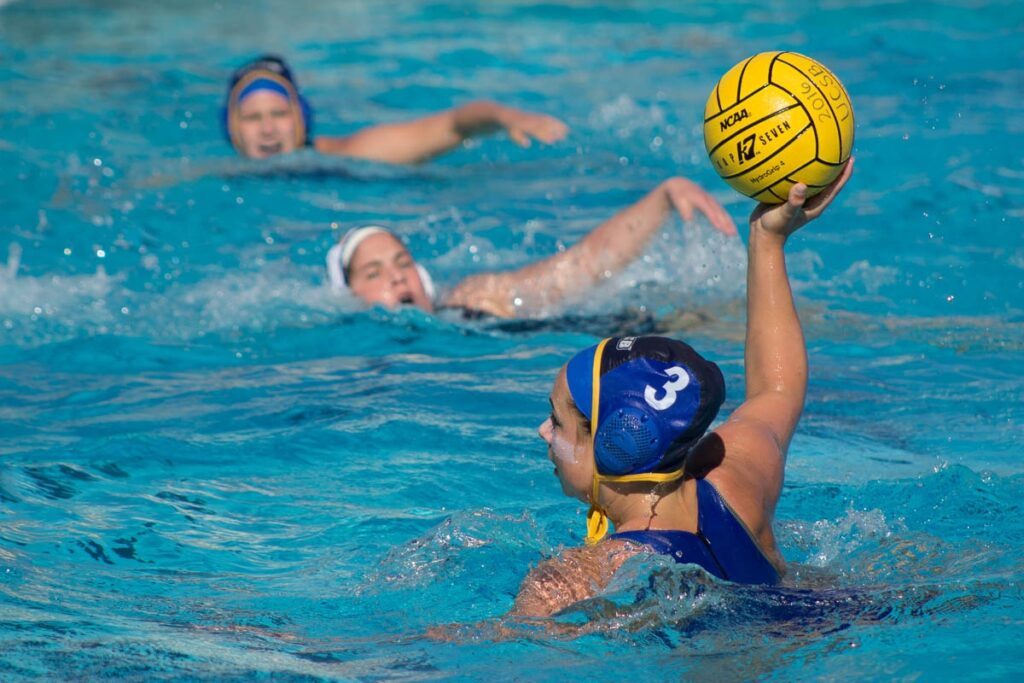 Sarah Kreiser gets ready to throw the ball into the net. Nexus File Photo

The UCSB women’s water polo team started their non-conference season with a bang, taking down two ranked opponents en route to a 4-1 finish at the UCSB Winter Invitational.

The Gauchos first match of the year was an easy 14-4 victory over California Baptist.

To nobody’s surprise, star freshman Amanda Legaspi played a huge role in the win, knocking in six goals in her UCSB debut.

Legaspi was an impressive pick-up for the Gauchos this past off-season. As a high schooler, the attacker was named Girls Water Polo Player of the Year by the Inland Valley Daily Bulletin and received offers from big water polo programs such as USC. Her heart was set on UCSB from the jump, however, and she already seems poised to become one of the most lethal offensive players that the Gauchos have had in awhile.

She knocked in two goals to put UCSB up 7-1 at the end of the first period, and they never looked back in their blowout win over the Lancers.

UCSB’s dominance would not stop there, however. On Saturday the Gauchos went on to win their next two games by a combined score of 30-10.

They first faced off against Fresno State, who surprisingly jumped out to an early 2-1 lead.

Fresno seemed determined to not let the main players on UCSB get any room, but this actually opened up space for the rest of the team to get involved. By the end of the match, 10 different Gauchos had found the back of the net, and UCSB pulled away with a 15-5 win.

The second matchup of the day was supposed to be their toughest one yet, as they took on No. 13 ranked Indiana.

The Gauchos were unflappable, however, and thanks to a Sarah Snyder hat-trick they jumped out to a 6-1 lead in the first period. Snyder has been a consistent positive presence on both sides of the ball for the last two years, and is set to take on more of a guiding role this season for the young talent. She set off what turned out to be another dominant 15-5 win, and UCSB ended the day that much closer to a tournament victory and national ranking of their own.

The final day of the invitational did not end the way the Gauchos wanted, but they did pick up a place on the national leaderboard and came close to upsetting an undefeated UCLA squad.

UCSB first faced off against No. 14 Wagner, and again it was Snyder setting the tone early. The utility player scored in the early moments of the match, and the Gauchos relied on their stingy defense to come away with a 9-4 win. This win propelled UCSB to No. 17 in the country, and set the stage for a tough battle against No. 3 UCLA.

While the two squads were tied 3-3 at halftime, the Bruins eventually pulled away late for the 6-4 victory. They came away as the only undefeated team of the invitational with a 5-0 record, while the Gauchos dropped to 4-1 on the season.

This was a promising start for the women’s water polo team, especially considering how well the young players performed. Underclassmen such Legaspi and Mollie Simmons outplayed some of the top players in the country, and as they continue to grow into their roles this team could easily become Top 10 in the country.

UCSB will have a week off and then head over to Arizona State for the ASU Invitational on Feb. 1.