The Daily Nexus
Opinion
Fantastic Queerbaits and Where to Find Them
January 17, 2019 at 12:41 pm by Anabel Costa

Like most people, I am a huge Harry Potter fan. I’ve read every single book, hosted multiple movie marathons and, for about two years straight, was lulled to sleep by cassette recordings that feature the voice of the one and only Jim Dale. 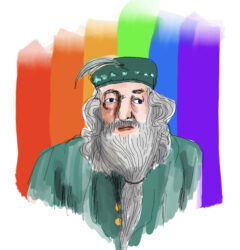 As a fan, I of course was excited to see my favorite fantasy worlds — Fantastic Beasts and Where to Find Them and The Crimes of Grindelwald — back on the big screen. However, leaving the theatre after watching the latter, I was not happy. Most of the characters lacked proper arcs and development, and several plotlines were then introduced that proved to be nothing more than cheap attempts at connecting this film to the original Harry Potter series, while retaining little (if any) purpose or relevance to the original story. Although I found myself frustrated by all of this, what overshadowed even the dullest characters was Albus Dumbledore’s newfound gayness.

Though the film is centered around Dumbledore and his supposed ex-lover, it does a pretty poor job of actually portraying a same-sex relationship. The few moments in the film that do hint at gayness can easily be brushed off as “a really close friendship” by anyone who might feel even the slightest bit uncomfortable. There is a word we use to describe this type of writing and it’s called queerbaiting. It’s a way of drawing in queer audiences and getting them to shut up about representation without having to follow through with any of it or commit to a stance.

I found myself leaving the theatre ranting about how Dumbledore’s gay subplot lacks authenticity. If it’s not going to be properly addressed then the relationship shouldn’t be included at all. I was met with retorts like “why are you complaining?” and “you should be happy there is anything at all.” I fought back by pointing out that Dumbledore’s sexuality was never mentioned before, so it feels disingenuous to add it in now. In response, I was reminded of how Dumbledore never had a wife or a female love interest. Tell me again why that makes him gay? Are all gay men doomed to be lonely hermits? If this is the evidence, why not argue that he is asexual? Let’s not define gayness by a lack of heterosexual attraction, but instead by the presence of same sex attraction —that is what being gay means, after all.

Shortly after the final film in the original Harry Potter series was released, author J.K. Rowling received some backlash for the lack of LGBTQ+ characters in her books and movies. She countered this by saying that she “always thought of Dumbledore as gay.” To many fans, this was exciting news: finally! An essential queer character in a major franchise! But wait. Rowling wrote seven books and produced eight movies, but not once was Dumbledore’s sexuality stated, explored, or even hinted at. As much as I appreciate the effort, this is still not adequate  representation. Inventing gayness just because it makes the work appeal to more people does not count.

However, in this newest film, Dumbledore’s sexuality is touched upon — that is, if one vague line and a ten second clip of him looking into the eyes of another male is considered “touched upon.” The director of the film, David Yates, stated that Dumbledore’s sexuality would not be “explicitly” clear, but that the fans would know (can you feel the sarcasm dripping from my italics?). It’s not acceptable to claim queer representation without following through. Romeo and Juliet would have been exponentially less riveting or literarily significant had Shakespeare said their relationship wouldn’t be explicitly clear but the audience would know.

The thing is, sure it’s genuinely great that we have a new movie franchise (theoretically) centered around a same-sex couple, and there are supposed to be three more of these Fantastic Beasts films, so who’s to say this romance isn’t a slow burn? But even given all that, it’s just too little too late. There were over 3000 pages worth of opportunity to reveal Dumbledore’s sexuality, so why doesn’t it ever come up? Perhaps it could be argued that the information was too personal, but he reveals many other personal things, so why not this? One could also argue that he was closeted, but that is a cop-out.

As a long-time fan, it’s hard to admit but the truth remains: stories from the Harry Potter universe have become some of the biggest queerbaits in modern film and literature. It’s not just Fantastic Beasts, but also Harry Potter and the Cursed Child that many would consider queerbait. Who’s to say what will become of these stories as they age and expand, but as of now, I’m done being drawn in, only to be left disappointed.

Anabel Costa is tired of Hollywood’s exploitation of queer relationships to claim diversity and representation.

What shall I be offended by today?

what a queer article