The Daily Nexus
Sports
Collaboration With the Competition: Student Journalists Weigh in on College Cup Teams
December 7, 2018 at 2:40 am by Sports Editor 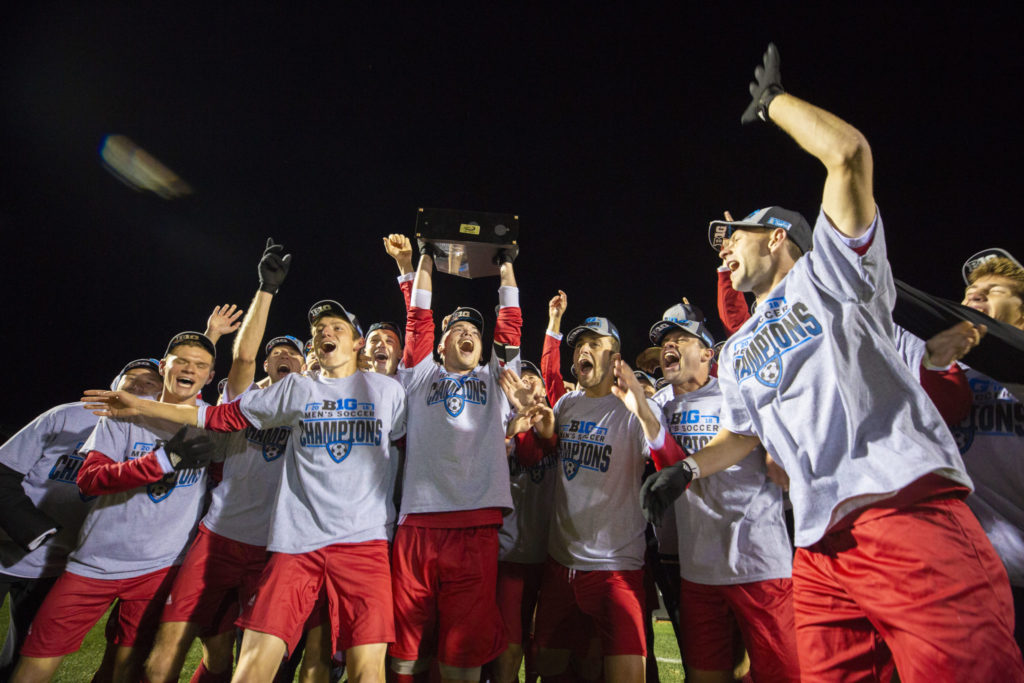 That’s been the underlying theme of this season for Indiana men’s soccer. Sure, Head Coach Todd Yeagley and his team would say all season long how the focus is just on the next game, and as much as that’s true, we know what this season meant.

Just about one year ago, the Hoosiers were seven minutes and 57 seconds away from going into penalty kicks with Stanford in the National Championship. But when IU forward Griffin Dorsey chose to try and dribble out of the box instead of clearing the ball away, a Stanford attacker stole it and shot it just over the outstretched hands of goalkeeper Trey Muse.

Before they knew it, the season was over.

It was a season that saw IU finish 18-1-6 and put together the fourth-longest shutout streak in NCAA history at 966:28 minutes. Just two key players left that team, and now 10 of IU’s 11 starters return in hopes of avenging that cold Sunday in Philadelphia on Dec. 10, 2017.

From offense to defense this Hoosier team is filled with talent and built for success. There is no weak link on this team.

Starting in the net, the sophomore goalkeeper has 30 shutouts in his two seasons at IU. Just last week, Muse made an incredible diving save to prevent Notre Dame from taking the lead 1-0 in the quarterfinals. Then there are IU’s two rocks in the backline in redshirt senior Timmy Mehl and freshman Jack Maher, who rarely let anyone sneak by them. The two outside backs are seniors Rece Buckmaster and Andrew Gutman. Both are quick and versatile in becoming offensively minded when the time is right. Gutman leads the team in goals with 11.

Mix that in with the controlling midfielders that are redshirt senior Francesco Moore, senior Jeremiah Gutjahr, redshirt senior Trevor Swartz, redshirt sophomore Spencer Glass and redshirt senior Cory Thomas, who can all shift back when Buckmaster or Gutman push up, and you get a team that controls possession and allows very few chances.

Then there’s the forwards — Dorsey, sophomore Justin Rennicks, senior Austin Panchot and redshirt sophomore A.J. Palazzolo. Panchot scored the game-winning goal against Notre Dame last week off a header from Gutman’s cross. Palazzolo is a big body that is dangerous on set pieces while Rennicks and Dorsey have the speed and talent to take any defender one-on-one.

The makeup of this team is dangerous, and that’s why the Hoosiers are 20-2-1 this season. The last time the team lost was Oct. 3 against Kentucky, which was an uncharacteristic 3-0 defeat. In the 63 days since then, which has included 12 games, IU has only given up three goals.

Also, since that loss, IU has scored 22 goals and been crowned Big Ten Champions — becoming the only team in conference history to go an undefeated 8-0 — and Big Ten Tournament Champions.

Everything is coming together right now for the Hoosiers, and they are playing their best soccer.

“We’re locked in as much as we’ve ever been,” Yeagley said on Tuesday before the team left for Santa Barbara, Calif. “That’s what you want: You want the team to find another gear in every phase of their game. I think we’re in that mode right now where everyone is locked in.”

The redemption of this season wasn’t supposed to be beating Stanford. No, the redemption was to claim what the Hoosiers believe is rightfully theirs: the National Championship.

Four teams and two games stand in IU’s way of accomplishing that goal. Akron, Michigan State, and Maryland are all deserving of spots in the College Cup, but there’s only one team who is so driven, so talented and so deserving of winning on Dec. 9, and that team hails from Bloomington, Indiana.

Now more than ever, redemption is within grasp of claiming the program’s ninth National Championship. 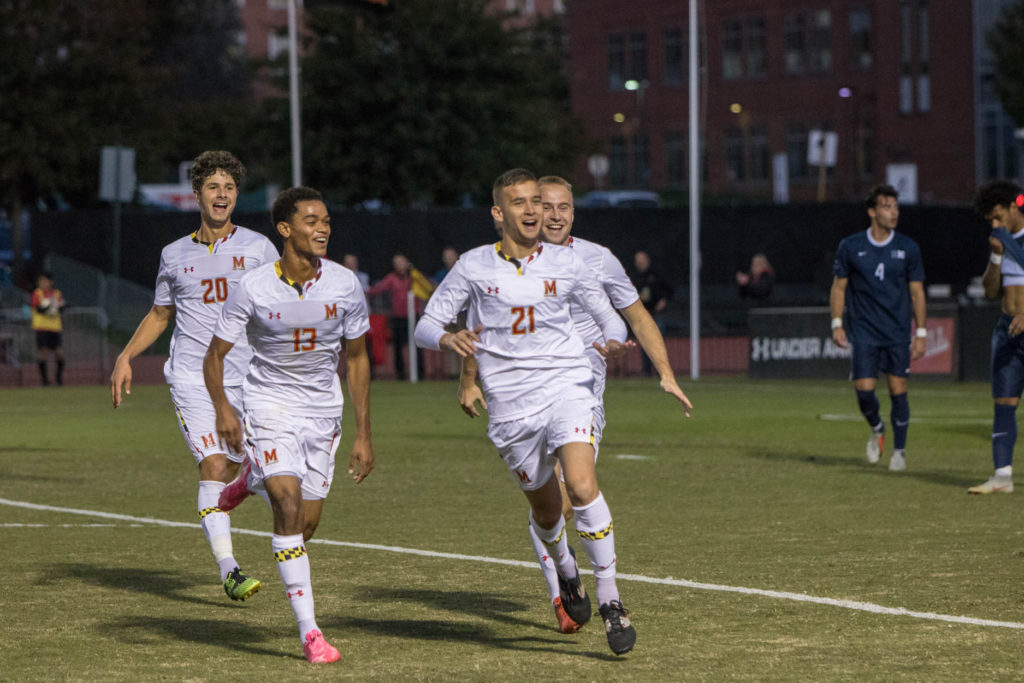 Terps Look To Finish The Season Strong With A Title
Joe Catapano, The Diamondback

Throw out the standings, the seedings, and the statistics. Forget that Maryland didn’t score for the first 476 minutes of the year, didn’t win until its fifth match and didn’t have a record that would even qualify for the NCAA tournament 12 games into the regular season.

No. 11 seed Maryland’s campaign can be summarized using the cliché adage: “It’s not how you start. It’s how you finish.” And the Terps show no signs of ceasing their magical postseason — one that’s featured two road upsets without conceding a goal in the tournament.

Head Coach Sasho Cirovski’s Terps are just as capable of winning the national championship as any of the other College Cup participants. Despite a semifinals matchup against a team they haven’t beaten both times they’ve tried this year, the Terps’ season took a dramatic turn with a loss on Oct. 12 to Indiana.

Maryland is 7-1-1 since falling to the Hoosiers with 18 seconds remaining in Bloomington. The impressive record is thanks to Andrew Gutman, who Cirovski continuously boasts is the best player in college soccer.

Even after two convincing 2-0 performances over former ACC foes in NC State and No. 6 Duke, it was hard to see Maryland upsetting No. 3 Kentucky in the quarterfinals. The Wildcats hadn’t trailed, lost or been shut out at home all season.

Maryland scored in the 29th minute and then held on for another 61 to accomplish all three feats. So now’s the time to refer back to my opening sentence: Through all the adversity this season, the Terps’ confidence has never wavered. They’re not surprised they’re playing in Santa Barbara, and understandably so.

They knew going into the season that the offense would take time to develop after losing three of their top four goalscorers from 2017. Maryland has now scored in 10 straight games and has scored on its first shot on goal in all three tournament games.

They knew they would become tougher playing through what’s now the No. 1 toughest schedule in the nation. Maryland only had two ranked wins in the regular season, but they now have three since the Big Ten tournament began.

They knew they had a senior class that lost in the NCAA quarterfinals as freshmen, only to see first-round exits in the next two years. Maryland has now redeemed itself, but those seniors didn’t come to College Park to reach a College Cup — they came to win one.

The means of doing so starts with the backline. It’s rare for a Maryland team, but its foundation is defense. Junior defenders Donovan Pines and Johannes Bergmann are an elite center back duo, complemented by outside backs senior Chase Gasper and sophomore Ben Di Rosa.

If that stout four-man unit breaks down, goalkeeper redshirt junio Dayne St. Claire will make every save he’s supposed to and most ones he shouldn’t be expected to. The Terps switched to a two-center defensive midfielder formation midway through the year, which essentially adds senior Andrew Samuels and junior Eli Crognale as reinforcements to an already-impenetrable defense.

Senior Amar Sejdic pushed forward as a center attacking midfielder, where he’s thrived for a team-leading seven goals this season. The three forwards up top have done enough to keep winning. Freshman William James Herve has the dribbling skills, junior Paul Bin has the speed and senior Sebastian Elney has the clutch gene.

Let this serve as the final warning. Cirovski has called this season a redemption story, and with two previous heartbreaks against Indiana this year, the Hoosiers might be the penultimate victim in the Terps’ title tale. 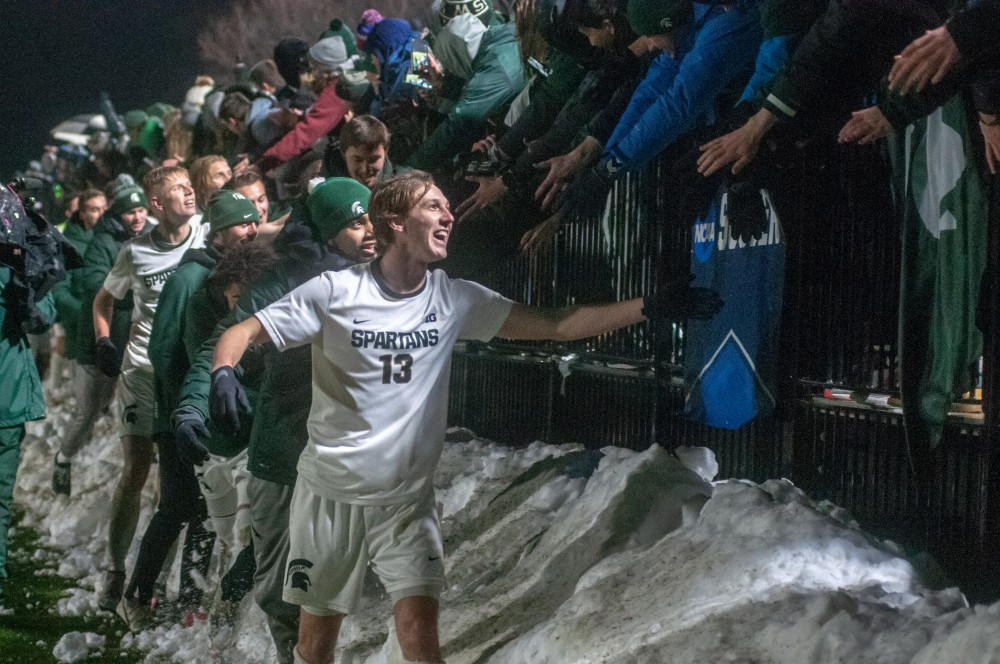 After five seasons of defeat, this is MSU’s moment
Kara Keating, The State News

When thinking about Michigan State athletics, the first thing that comes to mind is often the football team or the men’s basketball team. For other fans, they tend to point out the men’s soccer team, especially after they posted 14-4-4 in the regular season are beginning to be known as a powerhouse.

For the first time in 50 years, the Spartans are making their appearance in the Final Four after losing players to injury, going through scoring droughts and being eliminated in the Elite Eight four times in the past five seasons. This is their chance to earn the victory they have been dreaming of. With Head Coach Damon Rensing at the helm since 2009, the team has a 2018 NCAA Tournament record of 11-5-3.

The team has been named co-champions twice — once back in 1967 and again in 1968 — but this is their moment to shine and win it all as independent champions.

The Spartans would defeat some of the top teams in the Big Ten Conference and in the nation, but it was merely talked about while being shadowed by the 7-5 football team and other major news surrounding the campus. Before the start of the season, MSU fans would support the soccer team and head to the free games on campus, but they never truly got the buzz that they are getting now from Spartan fans and the student section known as the Red Cedar Rowdies.

After beating James Madison University last Saturday, the team is now seeing what impact they have made. While leaving a restaurant in town after a team meal, people began applauding, which is something the players have never experienced before.

“That just hit home on just how much of an effect this team has had,” Rensing said.

Not only do the fans in East Lansing want another National Championship for their town, but so do these players. Senior forward Ryan Sierakowski and his senior classmates made this their goal starting their freshmen year and are determined to make it there.

This season Sierakowski is close to becoming the first Spartan player to lead the team in points in his four seasons in the green and white uniform, and he is ranked No. 10 all-time in scoring, putting up 82 points in 81 games.

The offense isn’t the only ones hitting the back of the net, though. Three MSU defenders have scored a total of five goals together throughout the season: redshirt sophomore Patrick Nielsen, junior Michael Wetungu and senior John Freitag.

Another strong advantage for this tournament is the familiar faces that they will come to play against in the tournament. To start the Final Four off, they will take on Akron for the second time this season after losing to the Zips 2-1, but they feel ready to compete after regaining players back from injuries.

“We don’t have to watch film,” Rensing said. “We know Akron, and they know us … You’d rather dance with the devil you know than the one you don’t know.”

Going from multiple NCAA tournament runs and constant letdowns before making it to the Final Four, this team has come together for not only the fans but also for their former teammates to earn them the title that they know they deserve.

Whether they become National Champions or lose to Akron on Friday night, Michigan State will become a little more focused on what the soccer team will bring for years to come.