Michael Trump, founder of Coffee Organiks and a fourth-year biology major at UC Santa Barbara, is putting beans back in style. 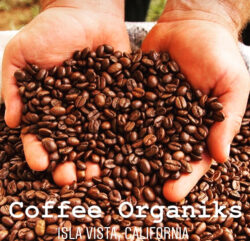 The philosophy behind Coffee Organiks is simple: Coffee is delivered straight to a customer’s door anytime between 6 a.m. to 8:30 a.m Monday through Thursday, and 6 a.m. to 11:30 a.m Friday through Sunday, thus eliminating the inconvenience of idling at storefronts such as Starbucks or Caje for a morning cup of joe, said Trump.

“If we can wake up Isla Vista with fresh coffee, deliver it to your door and cut out mediocre coffee that is victimizing our friends, then it’s a job well done,” Trump said.

Coffee Organiks starts their day earlier than most, preparing to wake I.V. by roasting fresh beans around 5 a.m. Cold brew is also “soaked in a sanitized vessel that extracts the flavor from the beans,” Trump said.

“We pack our bags, put our earphones on and greet the person with their coffee.”

Customers can order 16 oz. of hot or iced coffee for $3.50 and cold brew for $4, according to the company’s Facebook page. For 50 cents, customers can add hemp seed milk, almond milk or wildflower honey.

All orders come with cane sugar and half & half cream and customers who provide their own mug will receive 50 cents off.

Coffee Organiks sources its beans directly from farmers Trump has personally engaged with while working on coffee plantations in Central America. Beans from countries such as Peru, Costa Rica, Guatemala, Nicaragua and many others, have already made their way into the mugs of I.V. residents.

Quality is the paramount aspect of Coffee Organiks and often a characteristic that is hard to come by in the coffee served in Isla Vista, said Trump.

“[In I.V.] I don’t think there is anyone out there that can beat the quality of our coffee,” he said.

Coffee Organiks’ first round of deliveries brewed more demand than expected. Trump noted in a Facebook post that the Peruvian blend sold out in a matter of three days.

In addition to his Central American coffee blends, Trump is also looking to impress the caffeine-cravers of Isla Vista by securing an agreement with a chef in New York to expand Coffee Organiks’ menu to include domestic flavors as well.

Trump has faith Coffee Organiks will continue to satisfy I.V.’s palate, adding they are “flirting with the idea of a coffee subscription” which would allow customers to have coffee delivered every Tuesday and Thursday on a weekly basis for a discounted price.

Also in the works along is an app, which would allow users to order coffee through their phones, he said.

Coffee Organiks is not Trump’s first experience in caffeinated enterprises.

Trump’s first introduction to the coffee industry was during a trip to Central America in 2012. During his time in Atenas, Costa Rica, Trump gained knowledge about the process of producing coffee beans while working at a coffee plantation owned by the Carlos family, a family he continues to source beans from for Coffee Organiks.

“I grew a stronger passion once I started working on the coffee fields,” Trump said.

After returning to California to work as a chef for Google, Trump had a casual conversation about coffee with his roommates, which, after some experimentation and taste-testing, ushered the idea of a coffee delivery service into fruition.

Trump came to UCSB after he was offered a scholarship in molecular biology. After only a year of being a Gaucho, he officially launched Coffee Organiks.

“Nothing is better than someone who takes a sip of our coffee and is immediately in a better mood,” Trump said when asked about his favorite part of the process.

All products from Coffee Organiks are brewed in a sanitized kitchen under a food handler’s license.

Is Trump starting this business with a small loan of 1 million dollars?

Best of luck with your venture.

Michael is a great guy! Just one correction – the article implies that Peru is in Central America. Peru is a South American country – Central America is not the same as SA.