The Daily Nexus
Sports
Armond Davis Erupts for 22 Points as Gauchos Rout Montana State
November 18, 2018 at 6:54 am by Max Kelton 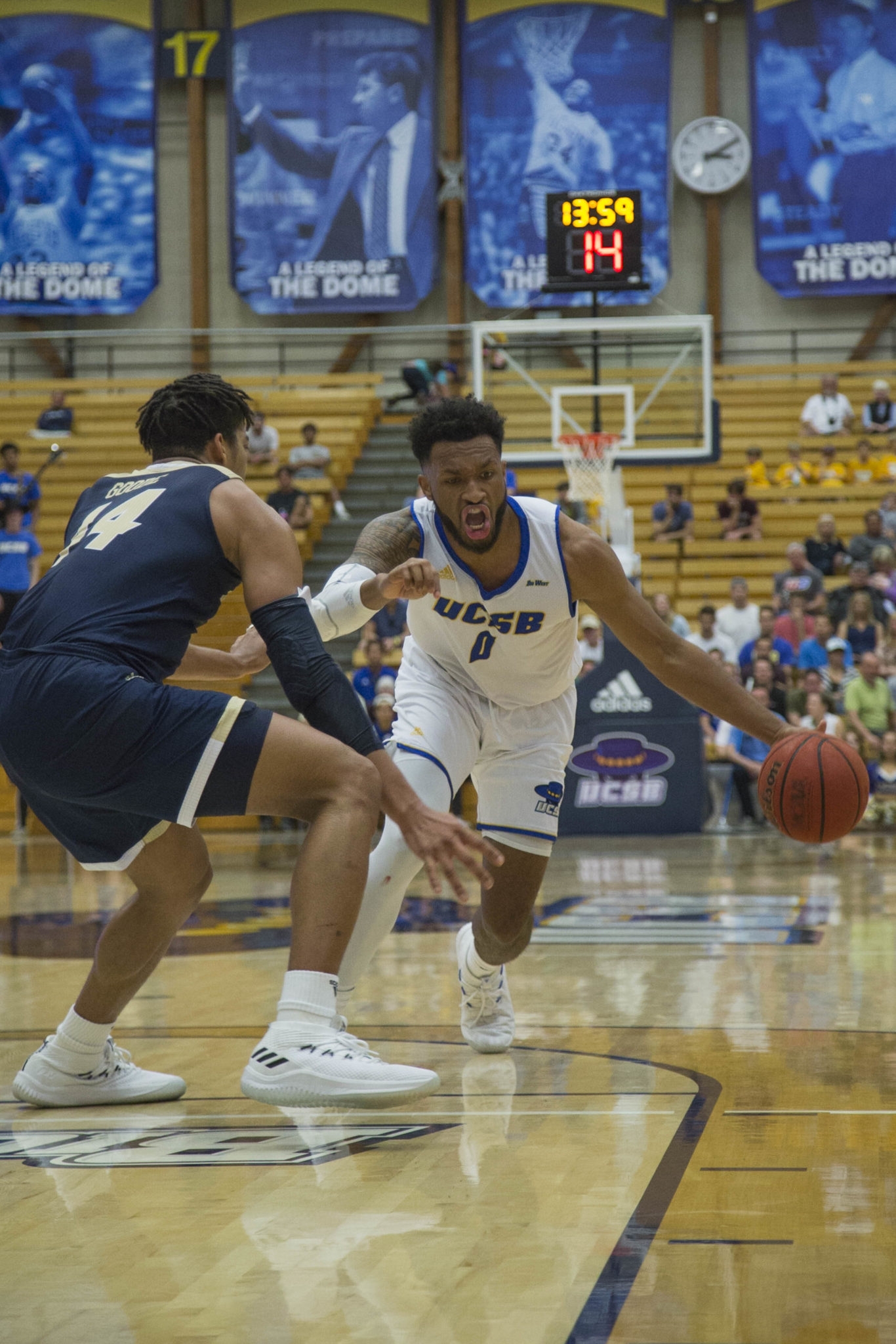 The Thunderdome was packed on Saturday afternoon as the UCSB men’s basketball team detonated for its second straight 88-point performance, knocking off the Montana State Bobcats with an 88-69 win.

Graduate guard Ar’mond Davis had a breakout 22-point performance on 7-14 shooting while sophomore wing JaQuori McLaughlin supported with 19 points and 5 assists while going 7-12 from the field, including 58 percent from deep.

“We had some good preparation this week coming into the game,” Davis explained after his career-high Division I scoring night. “We came out in the beginning playing really hard defense and that’s how we got that lead … probably my most aggressive game; I’m just trying to get back into my rhythm.”

Santa Barbara improved its record to three wins and one loss with the triumph over the Bobcats while Montana State fell to 1-4 with the loss. Now solely behind the unbeaten UC Irvine team, the Gauchos sit in an early second place in the Big West conference standings.

UCSB emerged from the gate with a three-pointer from McLaughlin, which fueled a 13-0 lead capped off by a deep dagger by sophomore guard Devearl Ramsey from beyond the arc. Only three minutes in, the ’Chos were grooving as the home crowd roared behind them.

The Bobcats were able to cut the lead to 27-17 after a jumper from junior guard Harald Frey, which forced Coach Joe Pasternack into calling a time-out. Shortly after the break, a block by senior forward Keljin Blevins led to a transition three from junior forward Ladan Ricketts to cut the Gaucho lead to seven, which was the closest the Cats could get throughout the contest.

“They hit some really tough shots: tough, tough challenged threes. Ricketts, number 11 — he was four of six from three, but those were challenged threes,” Pasternack remarked on how to handle the opposing scoring runs. “We can’t worry about the score, the runs or anything else. We just have to do what we do for 40 minutes.”

With five minutes to play in the half, SB went on a 9-0 run as its lead elevated to 17 points following buckets from four separate Gauchos. Senior guard Tyler Hall made a push to close out the half strong and minimize the deficit as he drew a foul to convert an and-1 basket with 36 seconds left in the half.

Hall, a unanimous first-team All-Big Sky Conference player last season, scored a team-high 21 points in 32 minutes on 6-16 shooting from the field. His seven free throws in eight attempts were the most for either team in the non-conference matchup.

First-year point guard Sékou Touré entered the ball game for the Gauchos’ final possession of the half to splash a three from the left wing and put the Gauchos up by 16 with a 48-32 edge heading into the second half.

Freshman forward Amadou Sow set the tone immediately following the second-half whistle as the big man posted a four-point swing to put UCSB up by 20. Sow drew contact on a jumper to head to the line for an and-1 opportunity. After a miss from the charity stripe, Sow corralled his own rebound and finished with an emphatic slam.

The Prolific Prep product aided with 11 points on 5-7 shooting while adding a game-high 8 rebounds in the process. In his first year of collegiate basketball, Sow has muscled his way into becoming one of the top five most efficient scorers in the Big West, with a 57 percent field goal percentage through four games.

Ricketts was lights-out from three for the Bobcats as he hit back-to-back corner jumpers from downtown to start a 17-3 run from the Cats. He cut the lead to 10 points with a 68-58 score as Montana State attempted to claw its way back into the ball game.

The Bobcats hoped to ride their momentum to a mighty comeback, but a quick trey from captain point guard Devearl Ramsey shut the door on a comeback as he followed it up with a coast-to-coast finish to put UCSB back on top by 16 with 5:26 left in the half.

“Teams go on runs; I just knew we had to regroup and just get stops again. It all comes down to our defense,” Ramsey recalled after the Bobcats’ stout comeback attempt. “When you sense a team’s making on a run, you have to bump it down and really try to get a basket. I feel like we did that well out of the time-out. Coach drew up a great play, and we executed and scored.”

Ramsey was the nucleus of the Gaucho charge as he dished out 8 assists and added 13 points, eight of which came in the second half. The sophomore guard put an exclamation mark on the 88-69 win with a magnificent no-look pass to senior forward Ami Lakoju under the hoop for the easy finish as time expired.

The strong homestand this past weekend delivered some home court stability for this Gaucho team as it takes to the road for the Vandal Holiday Hoops Showcase in Boise, Idaho, over Thanksgiving weekend.