This year, the fourth annual Ramenfest was held at the Kimpton Hotel in Goleta on Nov. 11. Ramenfest was composed of five different vendors, each vying for first place. The defending champion, Industrial Eats, was up against four other competitors: Outpost, Finch & Fork, Bluewater Grill and Barbareño. Take a look at On the Menu as we set out to determine if any of these five vendors were truly worth of the winning title. 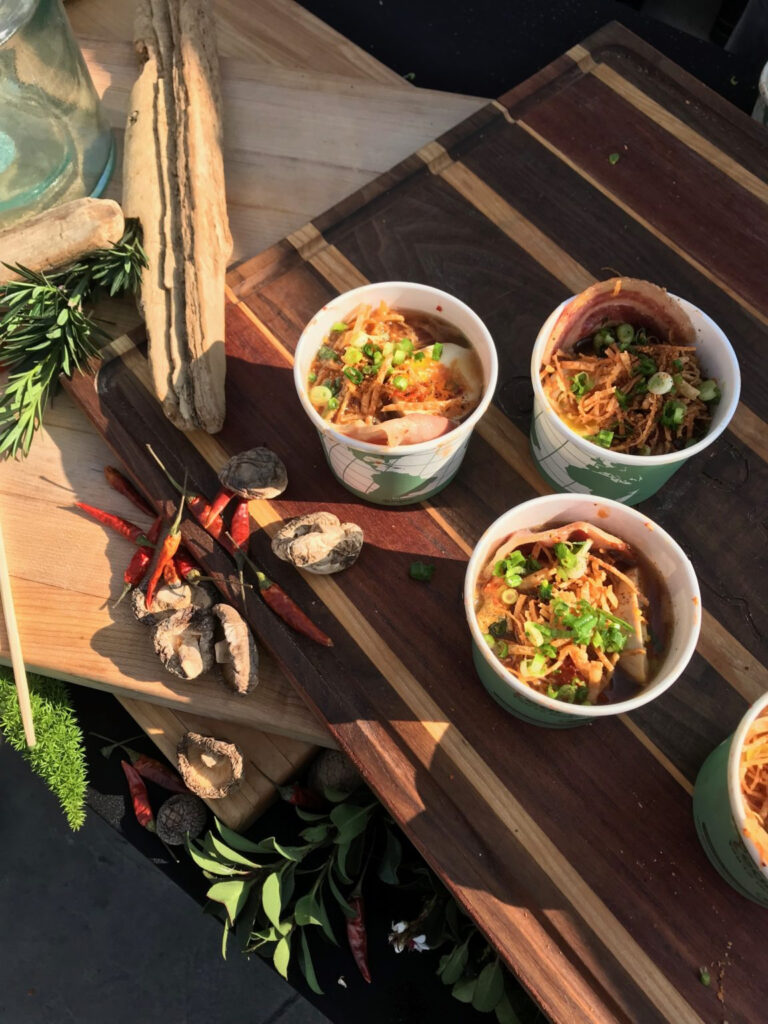 Industrial Eats was the second ramen we tried, and it certainly did not fail to please. It featured both duck and locally caught fish, which worked together to create a unique and delicious flavor I had not quite tasted in ramen before.

Chef Jeff Olsson’s passion for cooking was clear in the taste and presentation of his ramen. It was beautifully arranged with an array of toppings (including the necessary addition of a soft-boiled egg) that complemented each other in surprisingly delicious ways. His ingredients were entirely local, and he worked around what was available and sustainable, making his ramen not only fantastic but environmentally friendly!

The noodles were perfect, with a slight bite to them (and wonderfully slurpable). The broth didn’t overwhelm the taste of the noodles (which is the case with many types of ramen), and the duck and fish were both melt-in-your-mouth tender.

The 30-minute drive to Buellton to make it to Industrial Eats may seem far, but trust me, its worth it.

Finch & Fork actually ended up taking first place at Ramenfest, despite not having (at least, in our opinion) the best ramen.

“Really we wanted to do something different [this year]. We usually do a pork ramen and we wanted to try doing a chicken,” Executive Chef Peter Cham said. The process for Finch & Fork’s ramen was an arduous one, to say the least: “It’s like a weeklong process. The broth takes about 48 hours to make, then just a lot of prepping and marinating.”

The noodles were slightly chewy and the broth slightly overpowering, but the other choices of toppings were surprisingly good — especially the marinated bean sprouts and pickled mushrooms, which both added a unique twist. The house-made fermented chili sauce definitely added a little kick as well.

“It’s not just a simple thing that you just put together and make,”Damien Giliberti, the executive chef at Outpost, said. “There’s a lot of love, a lot of time.”

Giliberti’s enthusiasm and care for his ramen creation was evident in taste.

The warm smell of his double soup method of chicken and pork stock invites your taste buds to savor the ramen.

Gilberti’s said he used local meats, which is appreciated since the thickness of the bacon was the star of his ramen. The soy-marinated boiled egg was also a nice touch to the dish. The ramen had tiny sliced scallions, sprinkled chili flakes and crispy wontons that danced inside the bowl, which overall tied in the dish nicely.

The noodles were soft yet easy to slurp. Their wow factor was the nice suprise of a big, sweet tomato because it is a contrast to the savory soup. They get a bonus for being insta-worthy due to the different shapes, textures and colors of each ingredient that sat on top of the soup.

Outpost did everything right, and for that Outpost should be on your dining list.

While this is not usually on their menu but was available at RamenFest, Bluewater Grill provided a tasty ramen dish using local and quality ingredients.

“It’s a little bit of all the chefs that I learned throughout the years, things that I have been taught, and then just a compilation of what I like to eat, ” Chef Daniela Morales said.

Bluewater put on an elegant presentation by sprinkling sesame seeds on top of finely sliced scallops and stringy mushrooms. Underneath the veggies hid a chunky slice of pork belly that melted in your mouth.

The broth was a darker, savory stock that left a taste of spices and pork in your mouth. Inspired by an Asian influence and using the best bones for the broths as well as local and fresh veggies, the dish is a classic, comforting bowl of ramen.

The noodles were soft and not very slurpy, and the pork belly was was the ramen’s wow factor. If Bluewater Grill served ramen on a regular basis, it would satisfy a ramen lover’s craving.

Barbareño was last on our list of ramen to try, and by this point, our expectations were high. Chef Robert Knauss said that this year’s ramen was based off of one of their existing recipes (their Duck Bao Bun) but that he tried to make it a bit more unique.

The best thing about their ramen was the origin of its ingredients — everything was as local as possible. “We’re using stuff as local as we can get it; if we can’t, we’re using stuff that’s as sustainable as possible,” Chef Knauss said. He told us that he worked closely with many local farmers, which is definitely a good thing to hear from any restaurant.

This restaurant’s ramen came in last place and, as much as we hate to say it, we could definitely see why.

Its presentation was lackluster, with sad bits of green onion and who-knows-what floating in an endless sea of broth. The noodles were somehow soggy and chewy, and some of them were even clumped together in a not-fully-cooked ball. 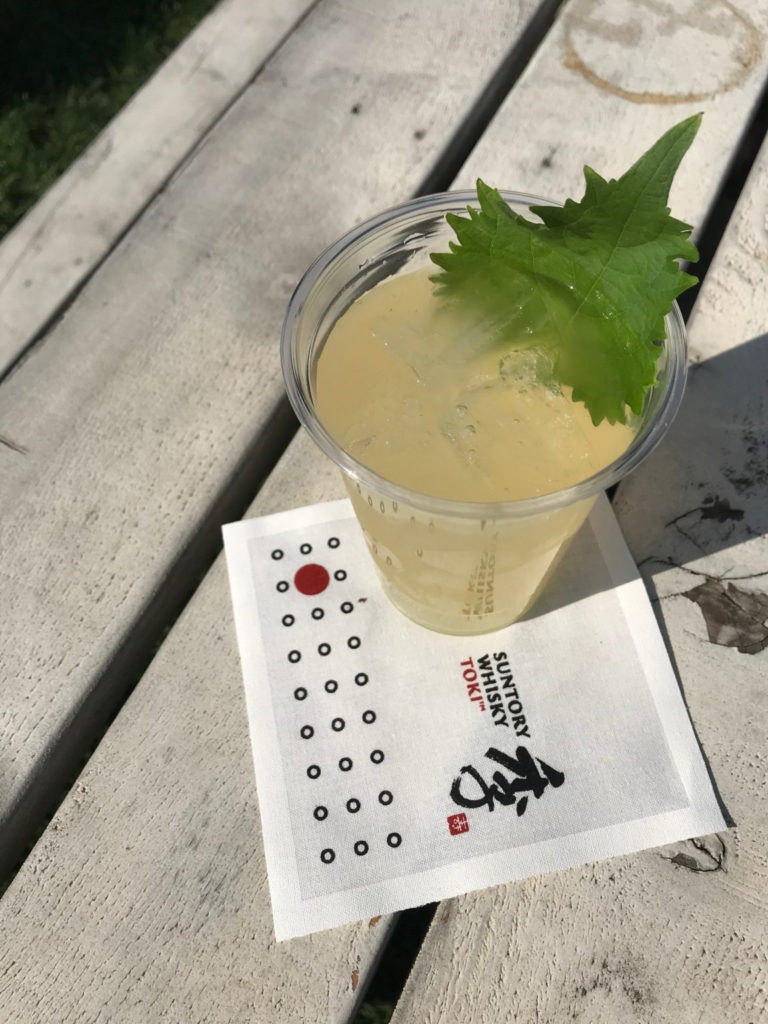 Guests were greeted with a welcome drink provided by a generously poured golden cocktail by Outpost restaurant. It tasted like a semi-margarita, semi-mint mojito mixed drink. It was a refreshing cocktail that used a Japanese whiskey and bombarded you with flavor as soon as it hit your tongue.

If you want to pair your ramen with a traditional cocktail, Gekkeikan Nigori sake takes that spot. The drink itself fools you due to the slight smell of alcohol, but it actually goes down smoothly. It has a milky color and thicker texture, but the taste is not strong — the nodes of banana make this sake stand out by giving it a sweet element.

If you need a go-to drink to accompany your ramen, I would recommend Draughtsmen Alesworks craft beer. The beer is a lighter golden beer with a floral node taste. It goes great with ramen because it does not leave an overpoweringly bitter aftertaste in your mouth, and it’s a refreshing contrast to your warm and savory soup. It goes down pretty smoothly, and I could pair this with another meal that is not just ramen, such as pizza or a meaty burger.

Ramenfest 2018 was definitely a success. Although Finch & Fork won first place, it was really Outpost that stuck out with its beautifully presented and deliciously complex ramen. The free drinks were definitely a plus, and we most certainly did not leave on empty stomachs.