The Daily Nexus
Sports
Gauchos Aim to Secure First Win in Road Matchup at USC
November 15, 2018 at 5:00 am by Brandon Victor 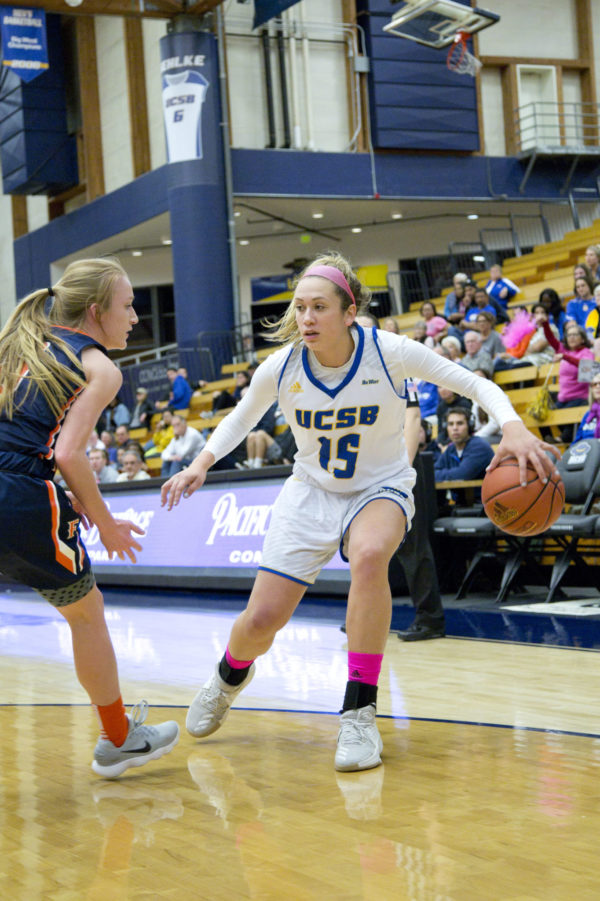 Following its tumultuous start to the season, the UCSB women’s basketball team will look to get things back on track when they travel down to Los Angeles to take on USC on Thursday.

Santa Barbara has dealt with inevitable growing pains to start the season after losing its top five scorers from last season. In their first two games (both losses) the Gauchos have averaged a meager 51 points per game. In their last game, a 56-48 loss to Cal State Bakersfield, the team shot only 23 percent from the field, making only three of their 25 three-pointers on the night.

Much of the team’s early-season struggles can be attributed to its inefficient offense, especially from deep. In its first two games combined, Santa Barbara has made only 14 percent of its three pointers despite chucking up 49 threes.

Despite their struggles on the offensive end, the Gauchos have remained competitive on the floor, dropping both games by single digits. In large part, their competitiveness is due to the play of junior center Natalia Bruening and sophomore guard Bri Anugwom, both of whom have stepped up so far to help fill the void left by the graduation of All-Big West forward Drew Edelman. Bruening has dominated on the boards, collecting 13.5 rebounds per game while also chipping in 15.5 points per game out of the post. From the perimeter, Anugwom has been one of the only consistent three-point threats, with a 50 percent clip from behind the arc.

UCSB has also impressed with its resilience and effort so far this season. In their game against CSU Bakersfield, the Gauchos found themselves down 32-14 at the half — a scoreline that would demoralize even the most well-coached of teams. Still, the team kept fighting, even cutting the lead to two points near the end of the second half. While the results haven’t been there yet, this no-quit attitude bodes well for the squad moving forward.

Unfortunately for the Gauchos, things won’t get any easier when they take on a Trojans team that has feasted on Big West opponents so far this season. In its first game of the year, USC cruised to a 73-55 victory over UC Riverside, before absolutely dismantling Long Beach State by a score of 86-50.

Santa Barbara will need to slow down the Trojans’ star-studded backcourt if the Gauchos have any hope of pulling off the upset. In particular, USC is led by senior guard Aliyah Mazyck, who averaged 16.5 points per game last year for a Trojan team that went 20-11. Mazyck is once again leading USC in scoring this season, averaging 19 points per game so far this year.

Mazyck is accompanied in the backcourt by junior point guard Minyon Moore, who has been sensational so far this season. After making the Pac-12 All Defensive team last season, Moore comes into Thursday’s affair averaging 3.5 steals per game, along with 18.5 points and seven assists per game. Moore and Mazyck form one of the most formidable backcourt duos in the country, especially on the defensive end, and handling them will be imperative to the success of Santa Barbara.

The Trojans are much weaker in the frontcourt, however, with no player other than Moore averaging more than 5.5 rebounds per game. Much of Santa Barbara’s success will come down to how well Bruening can exploit that weakness. If she can dominate on the glass and prevent USC’s backcourt from getting easy baskets, the Gauchos should be able to at least keep the game competitive.

The game will tip-off on Thursday at 7 p.m. at the Galen Center.

A version of this story appeared on page 07 of the Nov. 15th print edition of the Daily Nexus.