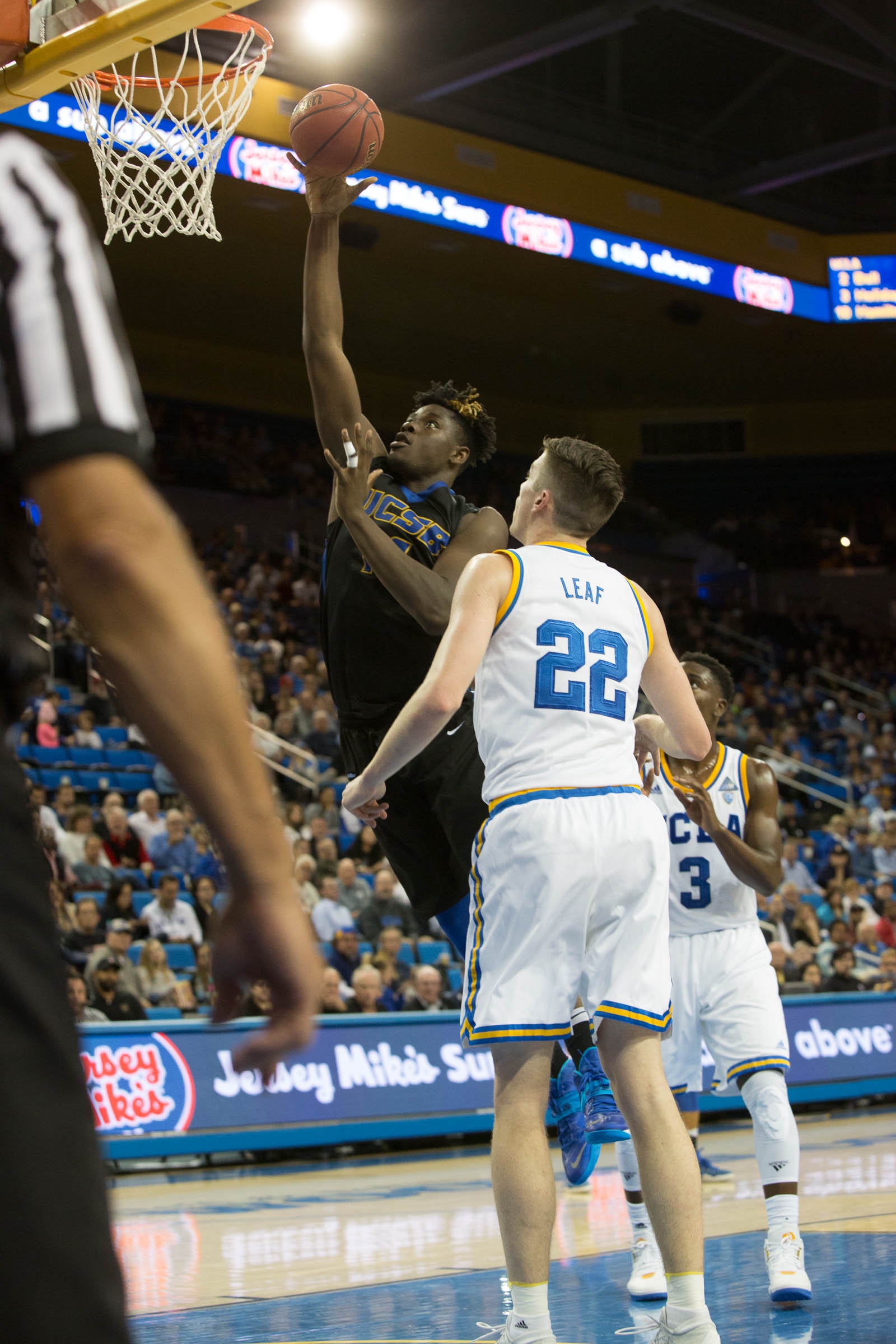 It’s been six months since the UCSB men’s basketball team hosted a game in the Thunderdome, but during their 88-32 homecoming blowout win against Cal Lutheran, the Gauchos were rolling in midseason form.

Santa Barbara improved to 2-1 after the home opener. The 56-point route of the Kingsmen was the largest win margin in UCSB history, beating the previous mark of 55 points set against Cal Poly Pomona in 1971. The Kingsmen dropped their season opener to move to 0-1 on the year.

Freshman forward Amadou Sow burst out of the gate with the first seven points of the contest capped off on a feed from sophomore JaQuori McLaughlin. It didn’t take long for McLaughlin to get in on the scoring action, as he splashed a three to put the Gauchos up 10-0 after only a minute and a half of action.

Sow glowed in his first game at the Thunderdome, as he finished with 15 points and a game-high 83 percent shooting from the field in a mere 14 minutes of playing time. After a half of play, Sow was 4-4 on shooting with 13 points. The Prolific Prep alum added seven boards during the short start, including five rebounds in the first half.

On the other end of the floor, the Kingsmen were held to just 15.7 percent from the field as their shooting struggles plagued them throughout the night. Cal Lu posted just 21 points from field goals while they knocked down a cold 3 of 25 from three-point range.

“We have to be a lockdown defensive team for us to be successful,” Head Coach Joe Pasternack expressed postgame. “My whole focus is to prepare our team to give incredible effort defensively on every single possession; the rest will take care of itself. I think we did that tonight.”

The Gauchos continued to pile it on with a 15-2 scoring run as UCSB led 31-8 with 10 minutes to play in the first half. Junior guard Christian Terrell and sophomore captain Devearl Ramsey spearheaded the Gaucho attack from the backcourt as the duo shot 5-7 in the first half. Terrell finished with a perfect shooting night, going 4-4 from the field while adding eight points and three steals in the process.

UCSB finished off the half with an 8-2 run as Gauchos were on top 50-15 at the break. Senior forward Ami Lakoju powered the ’Chos in the final minutes of the half as he recorded 10 points in five minutes before the whistle.

“I’m here to help the team and do what I can,” Lakoju stated. “I’m here to help out, and if they want to keep going to me, I’m going to put the ball up … We have help coming off the bench, and moving forward we don’t have to rely on the starting five.”

The big men off the bench put on a show for the home crowd as Lakoju posted a game-high 16 points while his frontcourt counterpart, sophomore Robinson Idehen, added 10 points. Idehen and Amadou Sow combined for six blocks in the post as each of them contributed three apiece.

“We really had to get the ball inside. I thought we had a big size advantage,” Pasternack asserted about his game plan. “We had to move the ball. The ball was too stagnant; we were dribbling too much against North Dakota State.”

Thirsty to stack the stat sheet, the Gauchos attack featured more of the same offensive success with different faces producing. 12 out of 13 Gauchos scored a basket as the bench delivered a monstrous 53-point performance. None of the five starters played more than five minutes in the second half, as Pasternack valued the opportunity to develop the newcomers with extra playing time.

“All of our guys have worked so hard in practice each day to prepare themselves,” Coach Pasternack said. “To have a deeper team really helps us. We don’t have to play 35 minutes a game like we did last year … It’s huge to be able to go 10 deep; I think it’s really going to be beneficial when we get to March.”

The moment of the game came at the end of the contest when sophomore walk-on Scotty Harris contributed two baskets in the final four-minute frame as he got his first live-game court time as a Gaucho.

Following the scoring spree, UCSB looks to keep the attack sharp as the 1-2 Montana State Bobcats stroll into town on Saturday afternoon at 2 p.m. to take on the 2-1 Gauchos at the Thunderdome.