The Daily Nexus
Sports
Heidegger, Ramsey Lead the Charge for Coach Pasternack
November 8, 2018 at 12:15 am by Max Kelton 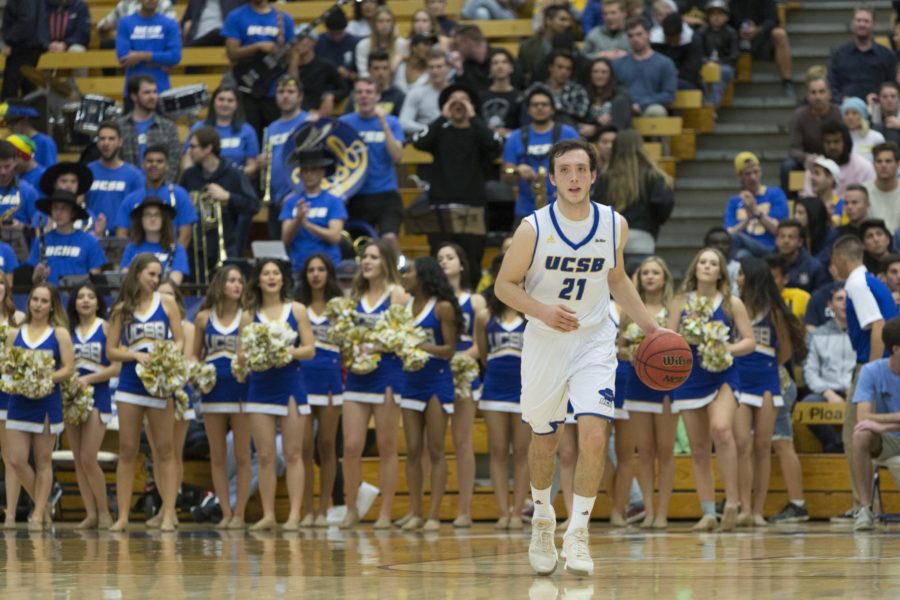 With Head Coach Joe Pasternack at the helm in his second season, the UCSB men’s basketball team looks to take a step toward a playoff berth into March Madness for the first time since 2011.

The Gauchos tied a program-best 23-9 record last season in Pasternack’s first year as the SB Head Coach. Following the 2016-17 season when the Gauchos recorded the worst single season in program history with a feeble six wins, Pasternack took the reins to deliver a 17-win difference in 2018.

The win differential was the largest single-season turnaround in NCAA history. Led by First Team All-Big West player Max Heidegger, the Gaucho offense produced the highest single-season point total in program history as Heidegger added 95 three-pointers, which totaled the most by a UCSB player in a single year.

Now a composed junior guard, Heidegger was named to the preseason All-Big West Conference Team as the only Gaucho starter to return from the historic 2018 squad.
Although four starters departed after last season, Santa Barbara has added a myriad of newcomers headlined by captain sophomore point guard Devearl Ramsey.

The Sierra Canyon product appears to have earned himself a starting role after being named as a team captain before playing a single regular-season game in the Gaucho blue.

“Last year I tried to watch what the guys were doing and see where I could fit in and how I could make my impact,” Ramsey recalled about the transition to UCSB. “We all have a chip on our shoulders and we all just want to be the best; we haven’t really hit a wall yet.”

Ramsey, along with junior guard Zack Moore, redshirted during the previous season after transferring from the University of Nevada and Seattle University respectively.
The extra year of development in the Gaucho system puts each of them in a prime spot to fluidly mesh with the new-look rotations.

“We’re not naive that this is going to happen overnight. It’s going to take some time,” Associate Coach John Rillie said. “We lost some really good players from last year’s team, and replacing them with young guys… that’ll take a little time, but all are willing learners.”

“It’s a big change from high school to college, from junior college to Division I,” the towering 6’10” Idehen said. “They wanted me to come here to have a rebounding role and be energetic. I’ve worked on my shot a lot and my touch around the rim; we’ve been working on that since the summer… I just want to out-hustle everybody. Whether it’s going up to get rebounds in the air or my speed running down the floor — getting fast breaks, playing fast pace.”

Idehen’s height puts him among the tallest on the Gaucho squad this season as he strives to complement fellow big man and senior forward Ami Lakoju. Lakoju spent the summer nursing a foot injury, but the post-up facilitator looks ready to go for tip-off on Tuesday evening.

Following the changing of the roster over the summer, Christian Terrell has assumed a significant leadership role as he fuses together the new Gauchos.

“I feel like CT: Christian Terrell, he’s helped me out a lot too with going over the offense,” Ramsey said. “Those older guys like [Jarriesse], like Max [Heidegger] my roommate — those guys all made my transformation easier.”

With leaders like Heidegger, Ramsey and Terrell in place, the coaching staff went out and recruited top-tier freshmen without worrying about their transition into the program. Over the summer, the Gauchos added Prolific Prep. High School standouts forward Amadou Sow and guard Sékou Touré along with forward Jay Nagle, who played at Will C. Wood High School.

Sow has long been one of the highest-coveted big men in his recruiting class; while Touré’s lengthy wingspan forecasts him as one of the top defensive stoppers on the roster.

Nagle was recruited as a 6’6” forward, but over the summer, the freshman sprouted up an additional two inches to tower at 6’8” just in time for the start of the season.

“They’re all the best players on their teams from where they’re coming from, but that’s not necessarily the case once they get to college,” Rillie said. “They have to understand how hard they’ve got to play. Simple things like running back in defensive transition — as simple as some skills seem — they’re a little harder to execute if you’re not giving the effort.”

Projected to finish fourth in the Big West, the Gauchos kicked off their season opener with a 76-66 win in Laramie, Wyo., on Tuesday, over the University of Wyoming.

They’re set to take on North Dakota State in Scheels Arena on Sunday, Nov. 11, at 11 am.