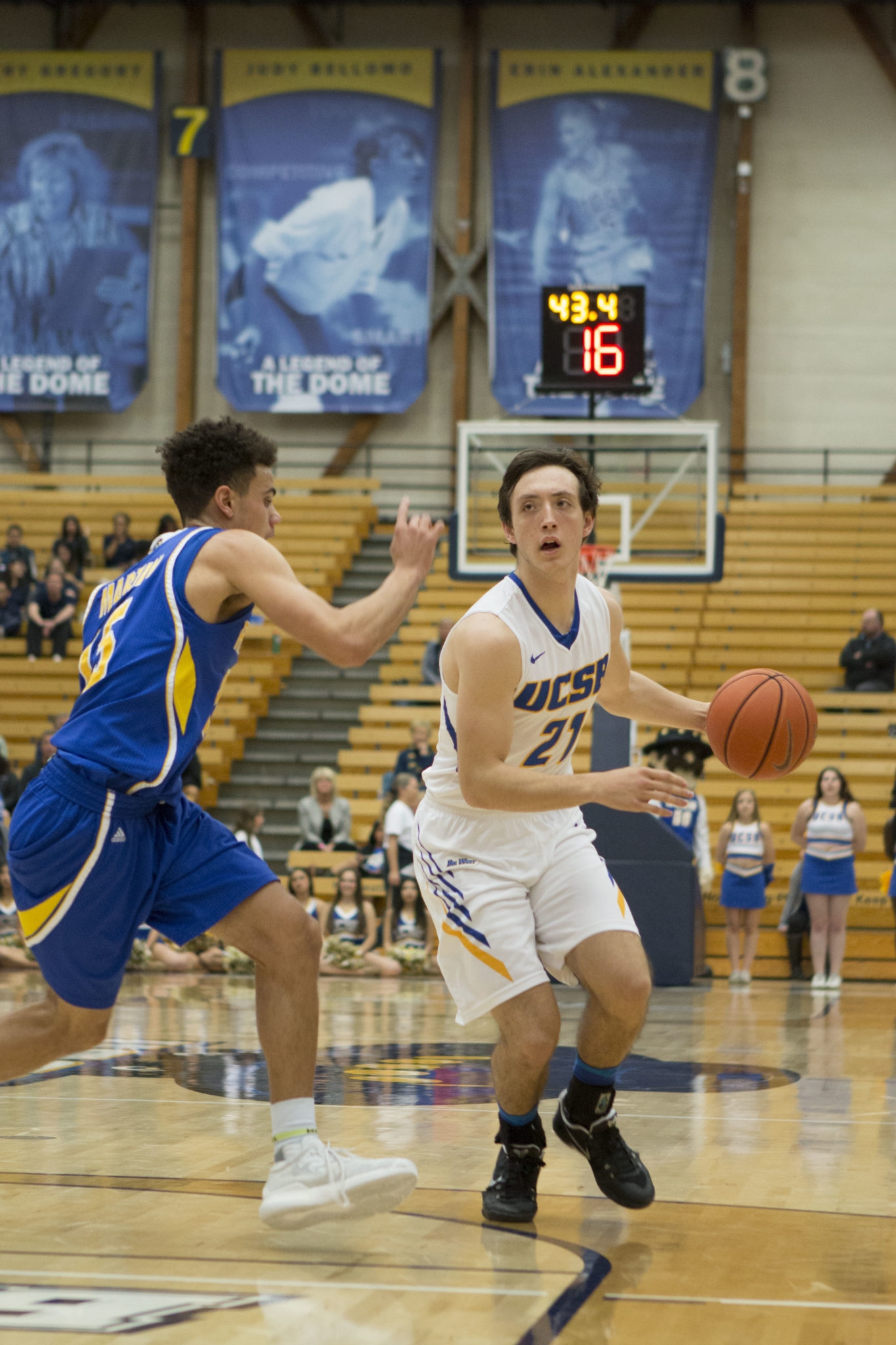 For the second consecutive season, the UCSB men’s basketball team posted a convincing win in their season opener as the Gauchos served up a late 14-6 scoring run to earn a 76-66 road victory over the Wyoming Cowboys on Tuesday evening.

With star junior guard Max Heidegger out of the lineup, JaQuori McLaughlin assumed the starting two-guard role as he put up 17 points on 5-13 shooting from the field, including going 1-6 from the perimeter. The Oregon State transfer added three rebounds and two assists to lead Santa Barbara to a 1-0 start this season.

McLaughlin was accompanied in the back court by sophomore captain point guard Devearl Ramsey, who shined in his first game as a Gaucho. The Sierra Canyon High School product balanced the UCSB offense with a team-high four assists in addition to his 14 points while going 3 of 6 from the field. Ramsey dragged down six rebounds in 29 minutes as the captain nabbed his first win in a Gaucho uniform.

Starting at center for the Gauchos was standout freshman forward Amadou Sow,  who recorded eight points on 40 percent shooting and brought down 11 rebounds in his first college game.

Senior forward Jarriesse Blackmon added a healthy eight points on 3-4 shooting in addition to eight boards and a game-high three blocks. Rounding out the starting five was graduate guard Ar’mond Davis, who tacked on six points over 19 minutes while shooting 2-7 from the field.

Senior guard Justin James led the attack from the Cowboys as he played the entire 40 minutes tonight while adding 20 points on 5-14 shooting and 11 rebounds. James also distributed four assists for the top mark for Wyoming, as it dropped the home opener to move to 0-1 on the year.

The Gauchos got off to a hot start as McLaughlin scored or assisted on seven of the Gauchos’ first eight points in the game within the first five minutes. As the ’Chos hung onto an 8-7 lead, UCSB hit its stride as Ramsey and freshman forward Jay Nagle knocked down back-to-back threes to put SB up 14-7.

Wyoming answered back with a commanding 12-3 run to take a 19-17 lead with 8:40 on the clock in the first half. A minute later, junior guard Zack Moore delivered a quick-release three-pointer to regain a one-point edge.

On the ensuing possession, Cowboy guard Hunter Maldonado responded with a deep three of his own to retake the lead. Immediately after, Jay Nagle countered with another three for the Gauchos to put them up 23-22.

Nagle chimed in with a perfect 3 of 3 from the field as the freshman led the Gauchos bench with nine points and three rebounds. Coupled with Moore, the two combined for 15 points off the bench to take charge of the second rotation.

UCSB entered the half with a 39-35 lead following a scoring frenzy from JaQuori McLaughlin, who added the final seven points in the half. McLaughlin capped off his run with a cross-over dribble drive as he drew contact on the basket and capitalized on the one opportunity to put the Gauchos up by four with only three seconds remaining in the half.

SB maintained control of the pace out of the break, as four Gauchos scored during a 10-3 run with 12:30 remaining in the contest to seize a 55-44 lead. The Cowboys contested with a 12-2 run of their own as they cut the lead to just one with eight minutes left.

Just when it seemed as if the Cowboys had muscled their way back into the ball game, Nagle knocked down his third dagger of the game, which set up a 19-10 finish over the final eight-minute frame to propel the ’Chos over Wyoming with a 76-66 triumph.

Following a 2017-18 season in which UCSB struggled to consistently get production from the bench, the Gauchos finally appear to have substantial talent and depth at every position.

The SB bench shot a polished 7-7 from the field, including a perfect 5-5 from three-point range. UCSB took a ginormous leap forward after having limited bench production last season, which ultimately led to its demise in the Big West Tournament as the bench only scored one point in the semifinals loss against UC Irvine.

Although it’s not reflected on the stat sheet, Christian Terrell seemed to make a significant impact every time he checked into the game. An instant boost of energy, Terrell tallied 23 minutes off the bench and converted a three-point play to keep the Gauchos on top midway through the second half.

The Gauchos continue their road trip on Sunday afternoon in Fargo, N.D., as UCSB takes on North Dakota State at Scheels Arena at 1 p.m.