The Daily Nexus
News
UCSB Students Gather in Response to the Trump Administration’s Potential Redefinition of Gender
November 3, 2018 at 10:00 pm by Ashley Rusch and Emily Komessar

Members of UC Santa Barbara’s transgender and queer communities gathered together on Thursday to protest the Trump administration’s proposal to change the definition of gender.

The move will impact an estimated 1.4 million Americans who do not identify with the sex they were assigned at birth, according an article put out by the New York Times. 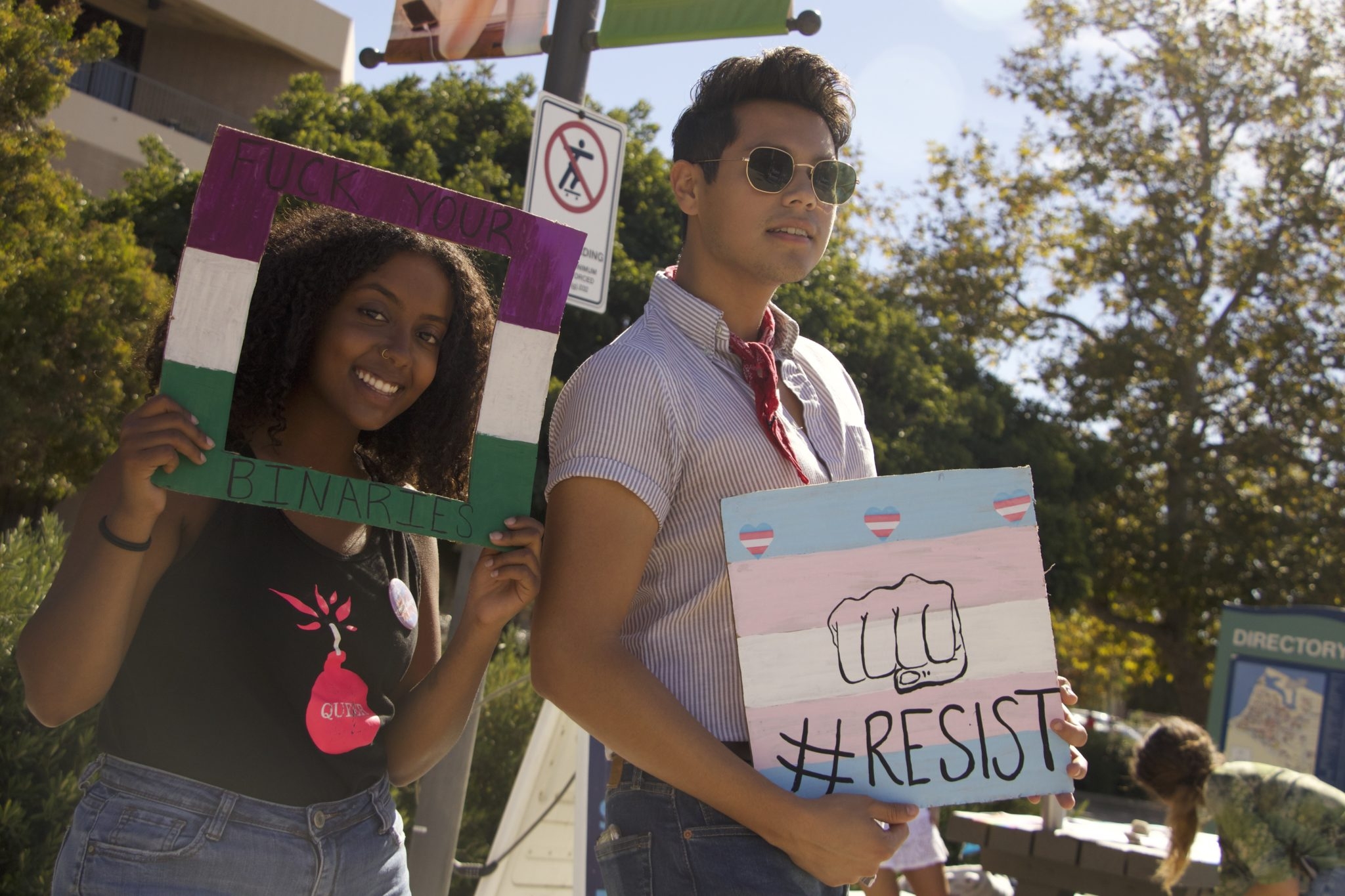 The event was organized by Senator Solomon (left). Courtesy of Zion Solomon

“I wanted to bring a positive movement and show trans people that they are seen and visible and show people why it’s important to show solidarity with trans folks even if they aren’t trans themselves,” said Solomon, a second-year history of public policy major.

The effort consisted of card- and poster-making activities on Monday and Tuesday in the Resource Center for Sexual and Gender Diversity (RCSGD) room, located within the Student Resource Building (SRB).

Students also tabled in the Arbor on Thursday from 8 a.m. to 3 p.m.

These events were supported with funds from the External Vice President for Local Affairs (EVPLA) and RCSGD, Solomon said.

“I know that suicide rates for trans people are rising and it’s not good for the mental health of trans people to be seeing this in the media, so regardless of whether they’re home or here, people are affected by it,” they said.

Several other volunteers joined Solomon in the Arbor.

Elisabeth Andres, a second-year sociology major, expressed that this event could be very informative and valuable to people without much knowledge of the transgender community.

“I think having visibility, having trans flags and rainbow flags out here and all of our signs really can leave an impact on someone who might not know a lot about the trans or LGBTQ+ community,” Andres said.

Diego Reyes, a second-year biology major who tabled on Thursday, is adamant about the drastic implications the Trump Administration’s policy might have.

“I know there are a lot of people who have their own opinions on what being transgender means and about what being non-binary means,” Reyes said. “I feel like that passing gives them a pass to spread trans antagonism and trans hatred… And I think if that passes then it’s gonna come back probably a hundred times worse [than it already is].”

UCSB’s administration has “been pretty responsive to trans needs” but always has room to improve, Solomon said.

Their primary concern is how the environment created by students on campus for transgender people could potentially see a big change following the gender redefinition policy.

“I don’t think that this will affect this university’s response. Maybe the students’ response and maybe transphobic people at this university, but I think we should still be pushing the university to support trans students regardless of whatever the administration says,” Solomon said.

Riley Hsieh, a second-year political science major, talked about the importance of support from allies who extend beyond just the queer and trans community.

Ivana Cruz spoke about how mistakes in pronoun use, whether deliberate or not, can feel invalidating and isolating, “especially in academic circles.”

“Even if there’s a slip with a pronoun and they don’t take time to acknowledge that, it can really intimidate you from an already-intimidating process of reaching out to your professors.”

However, Cruz stressed that solidarity can lead to progress and inclusivity and positive change.

“I try to look at what’s possible. I look at the fact that 20 years ago we wouldn’t be having an event like this. We wouldn’t be having open conversations about pronouns without being laughed at. They, them would still be grammatically incorrect,” Cruz said.

“I just think that we as a community have a responsibility to grow more and that’s essentially what’s going to lead to a very progressing change.”

The rainbow flag is racist. It separates the colors.

By your logic (sic) so are the pixel generators on your TV.

I hope you are not a student here. Would speak very poorly of UCSB.

Why did you write (sic) without quoting anything?

Simply to indicate that the use of “logic” in the above post was questionable in context. I took a liberty and bypassed standard use for citation and sic.

Thanks for your keen acumen. I hope my answer explains my intent even if it fails to pass standards of proper grammatical usage.

“I hope you are not a student here. Would speak very poorly of UCSB.”

Nice to see you can cut and paste. Perhaps you actually are a UCSB student. Moron.

Not sure what “I took a liberty [sic] and bypassed standard use..” means. Do you mean to say that you took the liberty?

While you continue to struggle with comprehension and hone in on my grammatical errors, perhaps more useful discourse would focus on the content of my critique vis a vis the logical fallacy in the initial post (by you?). this is like having a discussion with a savant with single minded purpose bordering on conceptual myopia.

lmao when u don’t have anything else to protest