UCSB has revealed its true colors over the course of just three days, and these colors certainly haven’t painted us as a “beloved community.”

While students crammed into overcrowded classrooms and fought for seats in the library of an overenrolled university, hundreds of workers essential to the functioning of the campus laid down the tools of their trade and stood in solidarity with 25,000 AFSCME members across the UCs. Their cause? To raise wages, at least substantially enough to feed their families, and to reclaim their dignity in the workplace. 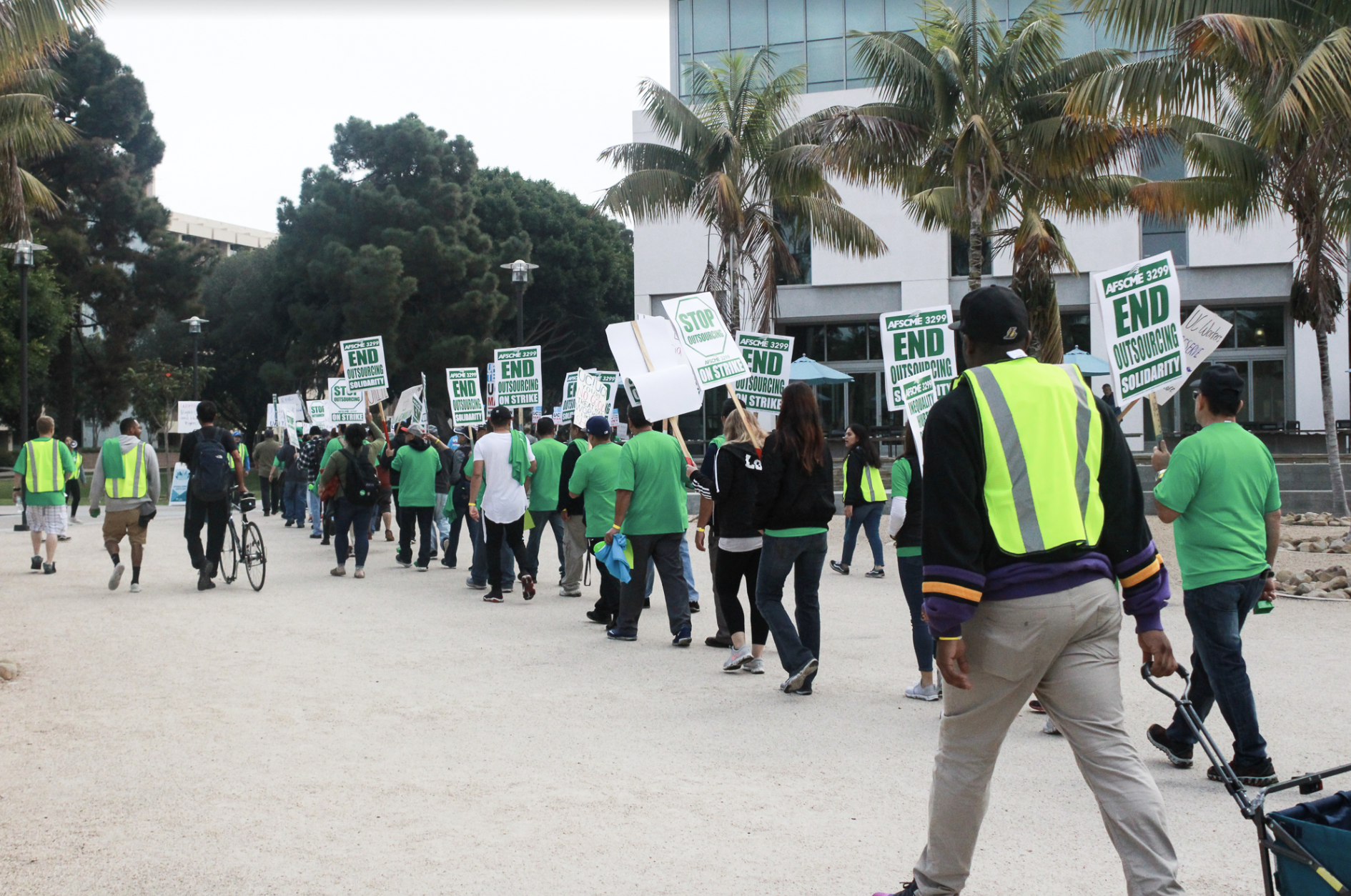 As the strikers woke sleeping residents, occasionally blocked bike paths, and marched across the university, our community splintered into polarized factions: those in support of the strike, those who condemned the disturbances, and those who were totally apathetic. People cast stone after stone from behind the safety of their keyboards, each side damning the other for their ignorance in light of ‘real issues’ and the strike’s effects on students, workers and families (depending on the ‘faction’).

Those who adamantly supported the strike consistently demonstrated compassion for the struggles these workers face. Some students woke up at 4 a.m. to deliver food to the workers, while others’ and others convinced their professors to move class outside to the picket line. The sacrifices these students made to understand the plight of strike members were genuinely admirable. Yet, some of these pro-strike students condemned opponents as “blinded by their white privilege” and economic advantages. This criticism was meant to race blind the anti-strikers, a method which proved distasteful in its transparent attempt to escape the addressal of an authentic argument.

Those who opposed the strike were vocal as well. The commotion caused by the strike can be best described as an unwarranted nuisance on our campus, they claimed. “Don’t these workers know that I have a midterm?” “If they want better wages, then they should get a better job.” Those opposed to the strike went on to say that the “snowflake students” were unable see the reality of janitorial jobs; that they were incapable of recognizing that janitors are “destined for poverty.” According to some anti-strikers, any discussion with the opponent was unnecessary, and contended that the viewpoints of those pro-strike bigots need not be argued.

People cast stone after stone from behind the safety of their keyboards, each side damning the other for their ignorance in light of ‘real issues’ and the strike’s effects on students, workers and families.

I was lucky enough to witness a semblance of idealized civil discourse between a few brave students. As I was studying on the fourth floor of the library, I overheard a conversation between two students that caught my interest. One pro-strike student, Kristina, encountered the argument of an anti-striker. Her attitude was productive and receptive as she stopped, listened and thoughtfully responded. First, Kristina listened to the views opposite her own and made sure she truly understood the justifications surrounding the anti-striker’s argument. Then, in a calm and direct tone, she gracefully rebutted each one of his premises and rightfully concluded that the strike was an unfortunate but necessary action. It’s not that the workers enjoy striking, it’s that they have children to feed, she explained. The minor nuisance their fight for dignity briefly imposed on the campus was infinitesimal compared to the plight these workers endure every day.

However, the majority of people during last week’s strike were not bigots. Most of our arguments failed, not because our opponents were willfully ignorant, but rather because our anger and frustration fueled our collective incapacity to consider the other’s differing views (of race, class, and origin). Our inability to sympathize with each other’s varying perspectives demonstrated the polarized state of affairs on campus and, consequently, our community’s obvious struggle to rise above it… at least in this moment.

And, to those in the middle who claimed ambivalence on the issue while simultaneously wishing the strikers wouldn’t be so darn disruptive, I know of others who held your view. Those who claimed the Greensboro sit-ins weren’t done the right way, who claimed the Selma to Montgomery March was a waste of time, who wished that African Americans would wait a while longer to see if things would change — it is those people whose company you share. It is hard to believe that this view is on the right side of history, and perhaps a change of heart is in order.

At the very least, our community needs to pause. We desperately need this moment to humble ourselves. If our generation hopes to one day rise above the divisive polarization that plagues our current political climate, we must engage in civil conversations — not with the goal of being right, but with the goal of truly understanding.

So, when we are stuffed into these overcrowded classes and dorm rooms, our conversations should resemble that of the empathetic dialogue I recently witnessed in the library. This is our only hope if we wish to earn the title of “beloved community”.

Tom Steel wants Gauchos to learn from one another’s perspectives when discussing the AFSCME strike.

I continue to be dumbfounded by these strikes. The great thing about America is that if you don’t like your job, or any aspect of your job, you are free to quit and find work somewhere else. ??? I simply don’t get it. Don’t complain, get a different job – for fucks sake!