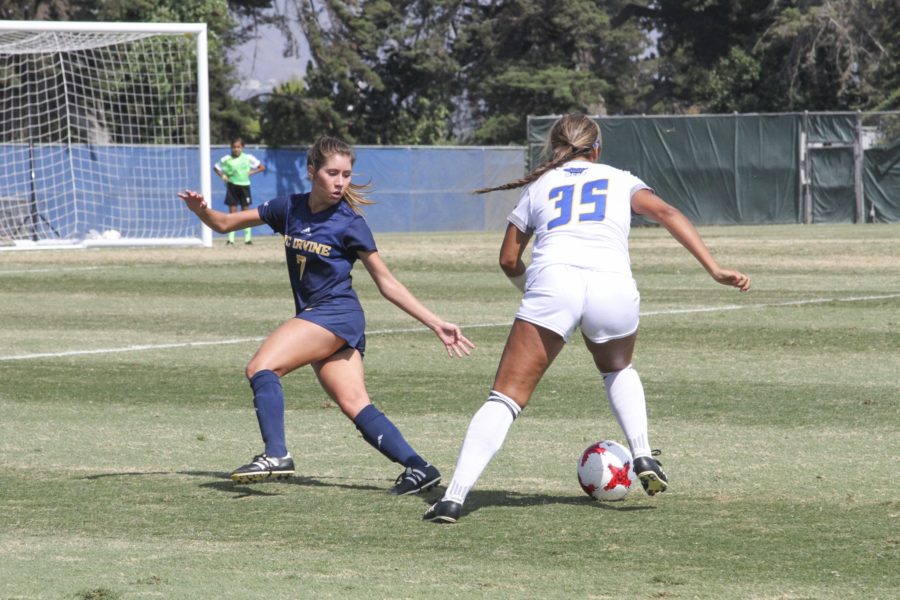 For the first time since 2009, the UCSB Women’s soccer team has reached the Championship match of the Big West Tournament following a 1-0 victory against No. 3 UC Irvine on Thursday evening.

The veteran-heavy Gauchos have all-to-often relied on crunch time goals during their captivating run in the Big West this year, but with their season on the line, freshman Hannah Wendelken took matters into her own hands.

A mere 20 seconds after the opening whistle, Wendelken found a streaking junior winger Katherine Sheehy who won a contested ball from Irvine in the midfield and fed Wendelken with a find about 35 yards out. Wendelken, a former UCSB Club Soccer product, blasted an absolute strike to the top left-hand corner that zipped past a diving UCI keeper Maddie Newsom to give the Gauchos life with a 1-0 lead.

“[Wendelken’s] role is kind of a bench player. A lot of the girls that get into that role, you can see that they concede; they stop working as hard in training,” Expressed Head Coach Paul Stumpf in his twentieth season. “Hannah on the other hand kept a high level the entire time…She hit an absolute bomb tonight; she smashed that ball. Hannah can give us a 25-30-minute shift and she did exceptionally well.”

The Gauchos had a chance to pile it on in the 37th minute as midfielder Christine Maurer drove down the touchline to deliver a chance at goal as Newsom stretched to make a fingertip save and keep it a tight, single-goal match.

Just a minute later, junior winger and Gaucho shot leader Shaelan Murison slipped past the right wing to deliver look for senior captain Mallory Hromatko who directed a cross that kissed the goalmouth as it skipped wide left.

Although both UCSB and Irvine rounded off the half with 3 shots a piece, the Gauchos remained in control with more promising looks and a 1-0 lead with only a half separating them and a berth into the Big West Championship Final.

“When we did bring pressure, we did a pretty good job of advancing the ball down the field,” recalled Coach Stumpf postgame. “They scored both of their goals in the first game on a couple of mistakes by us. I think the girls had to deal with a whole lot of set pieces that were dumped in the box and they managed it very well.”

The Anteaters best chances on the night came with consecutive breaks in the 62nd and 63rd minutes. Junior Keeper Hannah DeWeese maintained her shutout with two game-saving stops to keep the ‘Chos in control by a goal.

While Murison couldn’t get a look off in the first half, the winger took command in the second half as she peppered 7 chances at goal. The No. 2 goal-scorer in the Big West had four straight looks for UCSB in the 73rd, 76th, 85th, and 87th minutes as she looked to add some insurance to the single-goal lead.

The Anteaters made a last-ditch effort to revive their season with a free kick in the minute 90, but her look was blocked by the Gauchos wall and cleared out of the defensive zone to ultimately ensure a 1-0 UCSB triumph.

“The toughness, the character, the resiliency that the team showed… it was so impressive,” remarked Stumpf following the win. “We’re really overjoyed at the prospect of winning the Big West tournament. This is exactly where we want to be and we’re very fortunate to be here.”

With the victory in Irvine on Thursday, the Gauchos vaulted into the Big West Tournament final as they face off against Long Beach State at Anteater Stadium on Sunday afternoon at 1 p.m. for the title of Big West Conference Champions.