The Daily Nexus
News
UCSB Students Come Together To Mourn the Lives Lost At the Synagogue in Pittsburgh
November 1, 2018 at 12:01 am by Isabell Liu and Sanya Kamidi

Students hugged and held each other as they gathered in the Arbor on Monday afternoon to mourn the 11 lives lost in a Pittsburgh synagogue on Saturday morning.

The next day they united once again, alongside faculty and other members of the UCSB community, to affirm that anti-semitism has no place on campus. 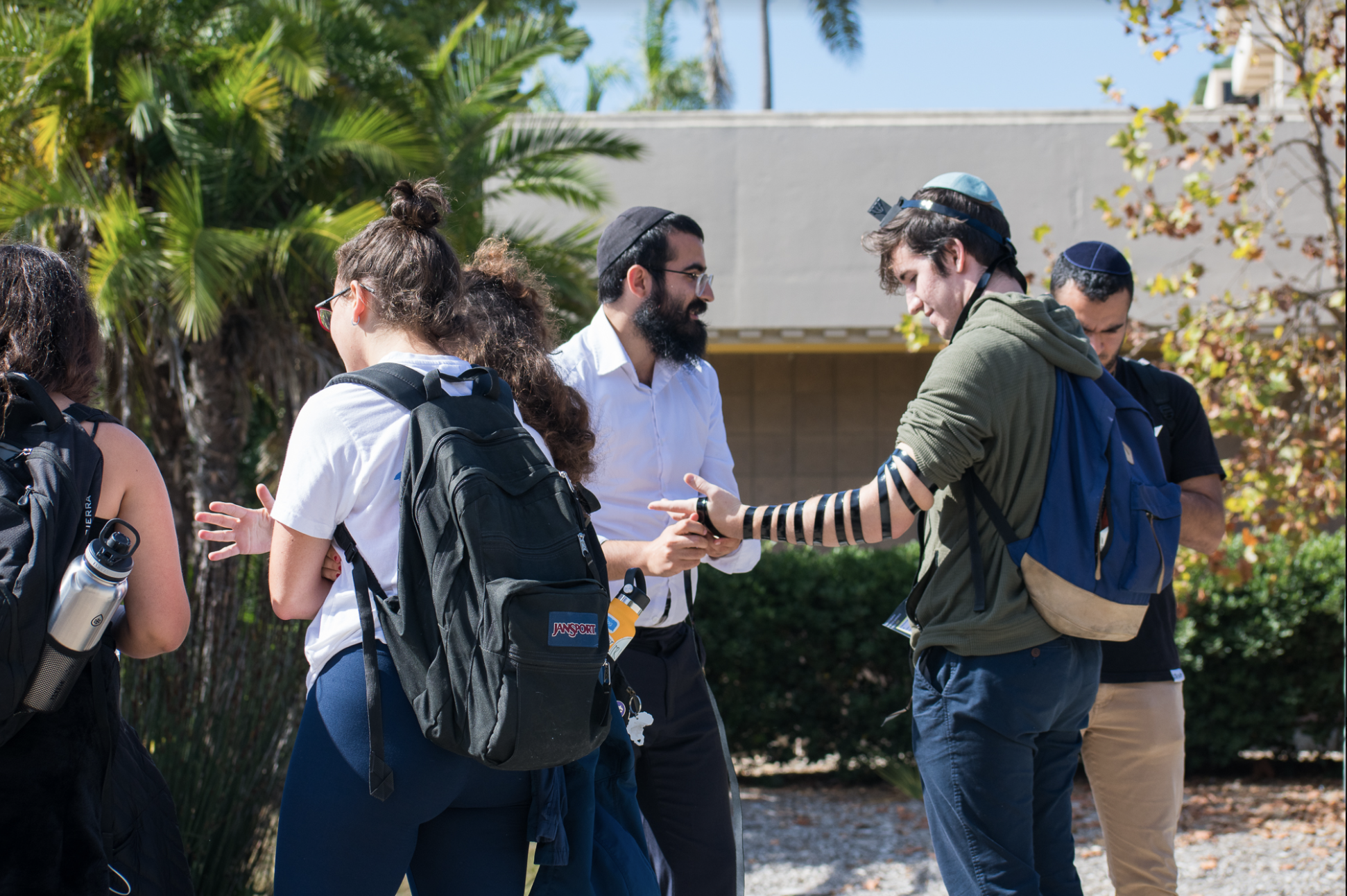 UCSB Students gathered on Monday and Tuesday to mourn the lives lost in the Pittsburgh shooting. Ida Kazerani / Daily Nexus

On Saturday morning, a gunman shouting anti-semitic slurs killed 11 people in the Tree of Life Congregation in Pittsburgh, Penn.

Many other attendees shared this sentiment as they gathered at the base of Storke Tower to hear student leaders and university officials address this recent tragedy.

“[UCSB is] outraged by the violence in our nation and pour out our support and care for our Jewish community here and across the nation, who have been targeted by this act of hate and terror,” UCSB Chancellor Henry T. Yang said.

“With tragedy comes the time to stand strong against the fear and bigotry and stand up for kindness, compassion and open mindedness.”

Chancellor Yang represented one of the many organizations responsible for co-hosting the event alongside Santa Barbara Hillel. The event was officially titled, “Standing With Pittsburgh Against Hate.”

Miri Klein, co-director of Chabad at UCSB, also spoke at the memorial and was one of the hosts of the “Mitzvah for Pittsburgh” event in the Arbor on Monday.

Jeike Meijer, External Vice President of Local Affairs for Associated Students, closed the ceremony with a reading of the names of the 11 victims and a song in her native language.

“I think that you can see how the UCSB community was impacted by how many people showed up today. How many people came, of different groups to show support and stand in solidarity. I think that shows the impact that it [the synagogue shooting] made,” Meijer said.

For some students, this recent tragedy may influence how they choose to vote in the midterms next Tuesday, Lazarus said.

”When public officials who are trying to fight discrimination, fight gun laws and try to create stricter regulations, it’s going to make things like this happen less often,” Lazarus said.

“I don’t think it’s going to eradicate it, but it’s gonna make it happen less.”

At Chabad’s table in the Arbor on Monday, the organization encouraged students to write down good deeds and add them to a board that they plan on sending to the Jewish community in Pittsburgh.

Rabbi Gershon Klein explained that mitzvot, or good deeds, are a way for Jewish people to bring light to the world during times of darkness.

“A mitzvah can mean different things. One of the main things it means is to be connected… we bring light from the essence of our soul outwards into the revealed world, like right here in Isla Vista,” Gershon said.

One of the mitzvot Gershon performed was wrapping tefillin around the arms of male students. This particular mitzvah is specifically for men, Gershon said.

“This is a mitzvah which represents being in the oneness of hashem, God, down into the world. We put it opposite the heart, on top of the head, because often, our heart and our head give us different messages. The whole idea of tefillin is to bring oneness, inside of ourselves and in the world,” Gershon said.

“So in the place where the biggest friction happens, between our emotions and our mind, we want to bind it and bring oneness to it.”

Daniel Caduri, an exchange student from Germany, mourned the loss of the United States as a sanctuary for Jewish people. In Europe, Caduri said, synagogues and other Jewish facilities typically have security guards.

“In the U.S. it was actually quite opposite. When you go there, everything’s open, you can just enter the room because there was no fear of danger so far. So I don’t know how it will change now,” he said.

“I hope that America will [still] remain a safe place.”

Antisemitism is alive and well at UCSB. Perhaps, it is because I, apparently, don’t look like a Jew (so they tell me), but people seem to feel free to spout their anti-Jewish hate at me, thinking I will agree. My buddy at UC Santa Cruz sees the same thing there.

Everyone looks too happy in that photo