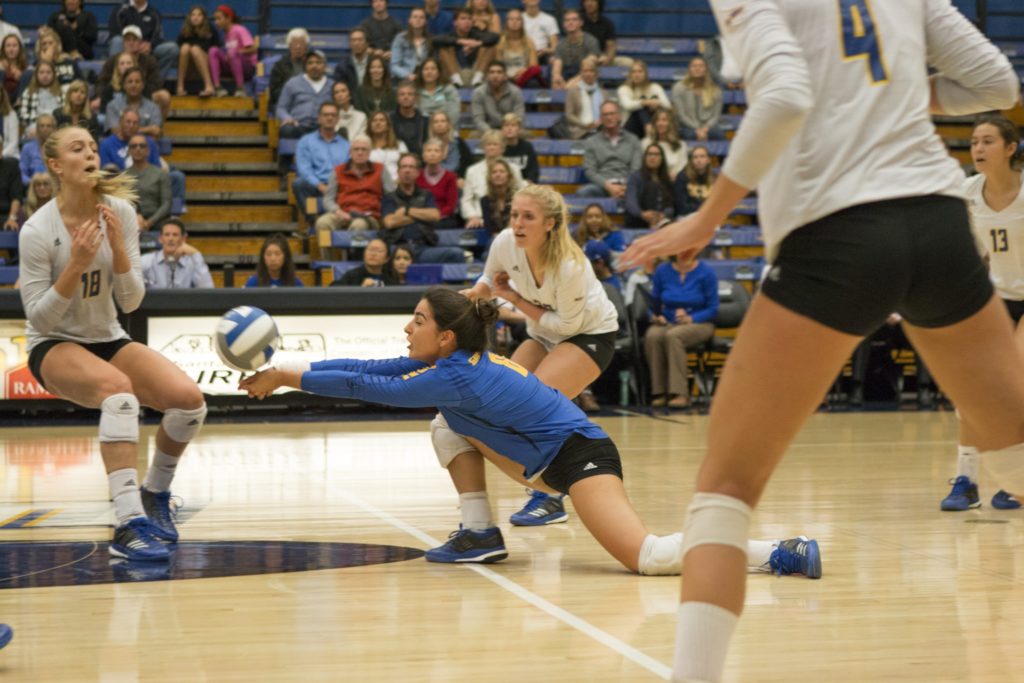 After a gritty home win last week, the UCSB women’s volleyball team rode its momentum into Honolulu and pulled off an upset win in the team’s biggest game of the season against the conference-leading Hawaii Rainbow Wahine. The road victory for the Gauchos is their first win over Hawaii since 2013.

The last time the two teams met in the Thunderdome on Oct. 5th Hawaii barely escaped with a win in 5 sets against a scrappy UCSB squad, however; in Saturday’s game the Gauchos showed up and went blow-for-blow with the Rainbow Wahine as they overpowered them the whole way, leading to a 3-0 match sweep.

This win moves Santa Barbara into a tie for fourth place in the Big West alongside UC Davis with just five games left in the season. It also greatly damages the Gauchos’ conference title hopes for Hawaii as they now fall a game back of Cal Poly in the loss column in the standings.

The Big West leader in kills, Lindsey Ruddins, had a relatively quiet game by her standards with 11 kills along with 9 digs and just a .128 kill percentage. She was complemented by her sister, freshman Gigi Ruddins, who tallied 10 kills on a .261 kill percentage to aid in the offensive attack for the Gauchos. Key contributions also came from senior Emilia Petrachi who finished with a game-high 16 digs and freshman Olivia Lovenberg who also lead both teams with 28 assists.

The Gauchos were able to bottle up Hawaii’s balanced offensive attack for the most part, as no opposing player had more than 10 kills on the match. The Rainbow Wahine were led by junior Mckenna Ross, who totaled 9 kills and 7 digs on the day. However, Hawaii’s usual offensive leader Mckenna Granato was kept quiet in this one as she finished with only 8 kills on a .057 kill percentage.

This match began with an eventful first set as both offenses were getting whatever they wanted and the lead changed hands multiple times. The Gauchos were holding on to an 18-17 lead late in the set before Hawaii went on a mini-run to retake the lead at 24-20 and it looked like the Rainbow Wahine were going to put the Gauchos away. UCSB responded and tied the match at 24 before ultimately completing the comeback to take a first-set victory by a score of 28-26.

The momentum garnered from their comeback win in the first set carried over into the second as the Gauchos stayed competitive in another tightly contested set. With the second set tied at 18, Santa Barbara decided to make another late run and seal it on a kill by Rowan Ennis to take the 2-0 lead in the match.

By the third and final set, the Gauchos had all but sucked the life out of the Rainbow Wahine, getting out to an early lead and never looking back as they took the third set by a score of 25-21 to complete the sweep.

This is a huge confidence-boosting win for the Gauchos as they head down the final stretch of Big West play and battle for a spot near the top of the standings. With five remaining conference game and three of those being played in at home, this presents a great opportunity for UCSB to finish the season strong.

The Gauchos will take on first-place Cal Poly in their next match with what is sure to be their biggest test of the season thus far. The Blue-Green Rivalry against Cal Poly will be played on Friday, Oct. 7th at 7:00 pm in the Thunderdome as the Gauchos seek to avenge their Oct. 12th loss to the Mustangs.